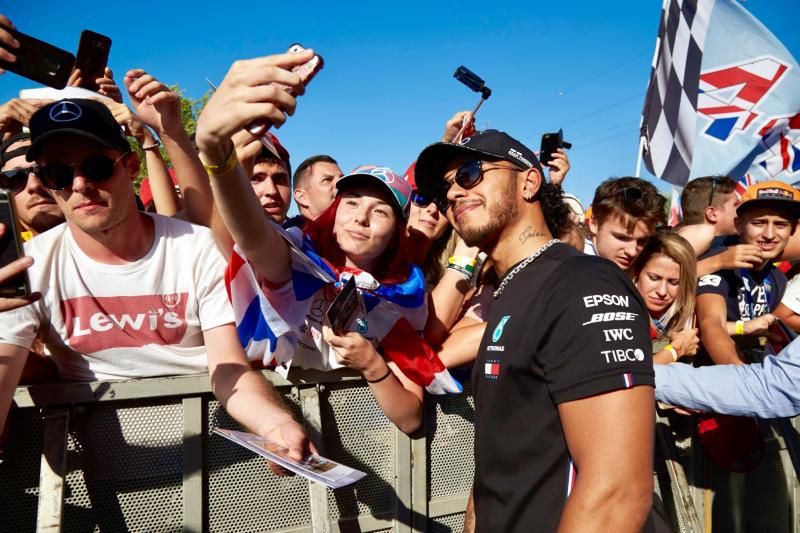 Selfie time for Mercedes’ Lewis Hamilton with some enthusiastic fans before adding another victory to his CV
Just days after the chequered flag had been waved at Germany’s Hockenheim circuit following an absolutely chaotic but enthralling race, the Formula 1 action resumed at the tight Hungaroring track just outside Budapest for this year’s Hungarian Grand Prix. In the end Mercedes outwitted Red Bull strategically and helped Lewis Hamilton to overcome his main rival Max Verstappen for the victory spoils.

In Friday’s opening free practice session Hamilton, Verstappen and Ferrari’s Sebastian Vettel had headed the timesheets, split by a mere 0.166 seconds, and it was encouraging to see a trio of different teams sharing the top positions.

Toro Rosso’s British/Thai rookie Alexander Albon had a nightmare start to the second practice period when an error at the final corner early in the session led to him crashing heavily into the barriers and causing significant damage to the left side of his car. In the increasingly wet conditions Pierre Gasly went fastest for Red Bull ahead of his team-mate Verstappen and the Mercedes duo. 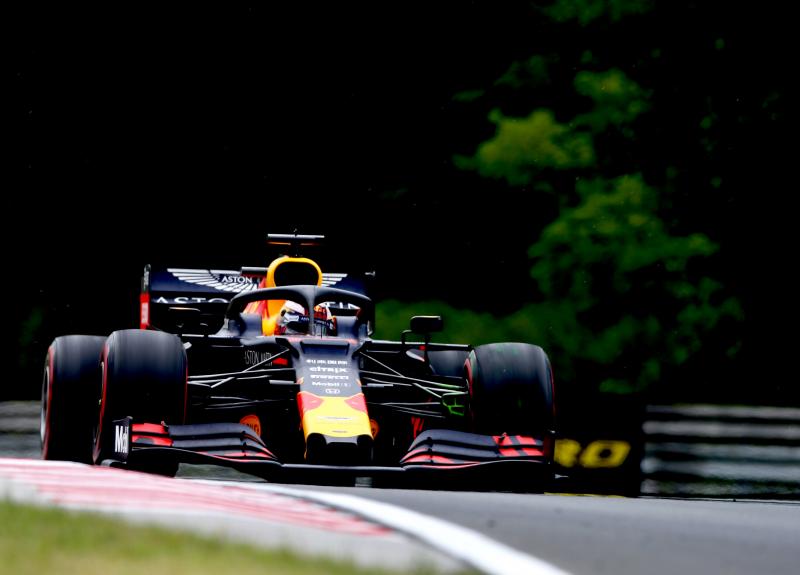 Red Bull driver Max Verstappen claimed his first F1 pole position before having to settle for the runner’s-up spot the following day
The start of Saturday’s hour long final practice was delayed by ten minutes and shortened by the same amount as a result of an oil clean-up job needed at Turn 4 following an engine blow-up in the preceding first Formula 2 race of the weekend. Verstappen looked set to be quickest before Hamilton snatched the honour from him in the final minute, with Vettel just behind them.

With the Hungaroring being a tight, twisty circuit, getting a good grid position is so important and Ferrari’s young rising star Charles Leclerc didn’t help his cause by crashing during the first part of the qualifying hour, but at least he made it back to the pits for repairs. Come the crucial final shoot-out for the top ten starting spots Verstappen led the way, claiming what was surprisingly his first ever Formula 1 pole position as he also entered the record books as F1’s 100th polesitter. His success simply drove his massed ranks of travelling Dutch fans, all dressed in bright orange as usual, wild with excitement.

Valtteri Bottas outpaced his team-mate Hamilton to earn the right to put his Mercedes flying machine alongside Verstappen on the front row, with Leclerc joining the British multiple champion on the second row just ahead of Vettel and Gasly. 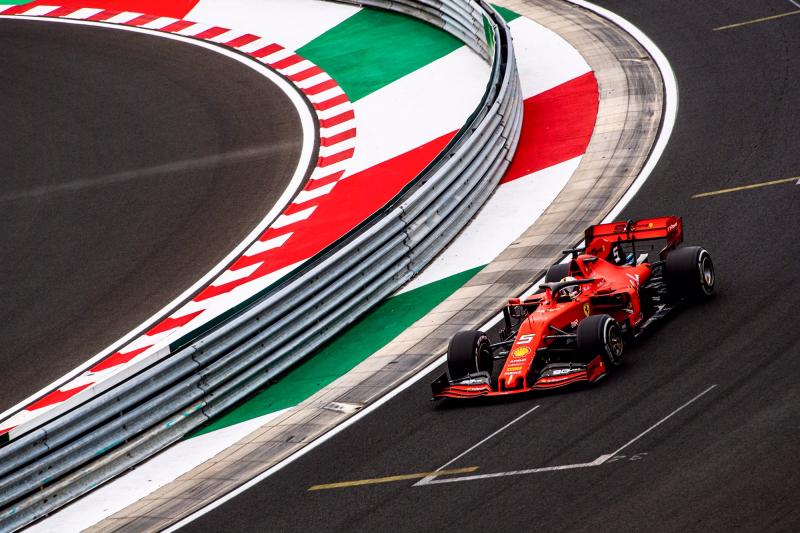 Third placed Sebastian Vettel was the first Ferrari driver to reach the chequered flag, if over a minute adrift of the winner
So, as is so often the case, the top three teams staked a claim to the top six positions on the grid, but 19 year old British rookie Lando Norris put in a superb effort to make his McLaren the best of the rest, just ahead of his Spanish team-mate Carlos Sainz.

Come race time mid-afternoon on Sunday Hamilton quickly dealt with the threat posed by his team-mate Bottas as he passed him round the outside at Turn 2 and into Turn 3 on the opening lap, moving him upto second position behind the leading Verstappen.

Worse was to follow for the Finn as he suffered front wing damage after Leclerc made contact with the front wing of his Mercedes as he too swept by. Bottas continued to race with the damage, but pitted on lap five for a new front wing and this dropped him to the rear of the field.

The Grand Prix soon became a straight fight between the leading Verstappen and the pursuing Hamilton as they left the Ferraris of Leclerc and Vettel plus everyone else in their wake, whilst Bottas started to gradually claw his way back through the field.

On lap 24 Verstappen told his team that he was losing grip, whereas Hamilton radioed in to say that his tyres were still good, and unsurprisingly the young Dutchman headed down the pit lane just one tour later to switch to hard specification tyres, rejoining the race in second place behind Hamilton.

The latter pitted seven laps later to make the same change to hard tyres, handing the lead back to Verstappen before a great scrap between the pair ensued. Hamilton did briefly get his nose ahead on lap 39, but ran wide and had to settle back into second place. 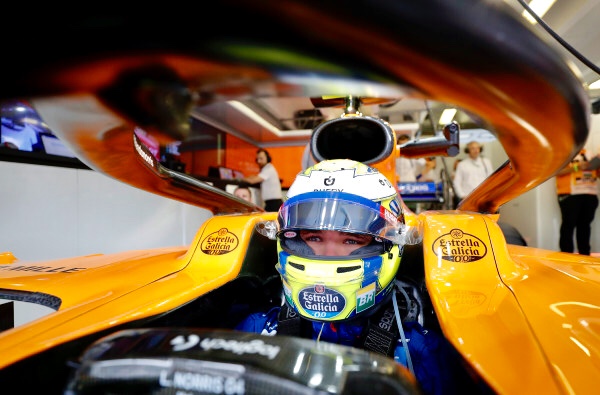 British rookie Lando Norris drove superbly to qualify his McLaren seventh before racing to a still commendable ninth place finish
On the Ferrari front Leclerc had pitted from third position to also switch to hard tyres, unlike his team-mate Vettel who delayed his stop until the fourtieth tour when he had soft rubber bolted on. A problem with the front right tyre delayed his stop though to a mighty 5.8 seconds as his recent bad luck reared its head again, but the German driver still re-entered the fray in fourth position back behind the other red car.

Mercedes then pulled off a strategic masterstroke by bringing Hamilton back in on lap 49 for a second stop to change to medium tyres, although the team later admitted it was actually as a result of brake wear fears. This dropped their lead driver to 19 seconds behind frontman Verstappen, if still in second place. However, they knew he was now on stickier, fresher tyres than Verstappen and told him to set about reducing the deficit lap by lap.

With 13 laps remaining Hamilton’s race engineer urged him on over the radio, saying “Lewis, you’re the fastest man out there, you can do this!”. As the Grand Prix progressed towards its conclusion and with Verstappen becoming increasingly concerned about his worn tyres, it became just a matter of time before Hamilton reeled his rival in and the British driver swept past the longtime leader round the outside at Turn 1 with three laps remaining, in effect sealing his victory. 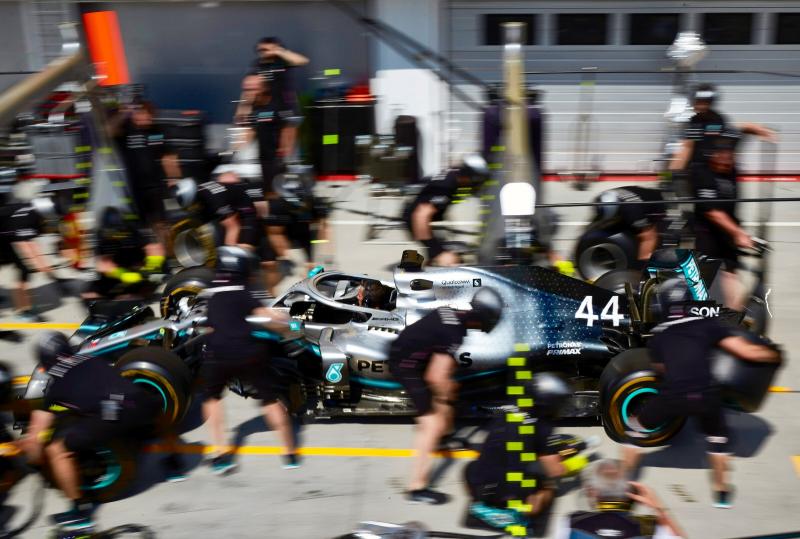 The Mercedes crew using Hamilton’s car to practise their pit stop techniques
This prompted Red Bull to immediately pit Verstappen for soft tyres in an attempt to at least get the additional point for the fastest race lap and the young Dutch charger duly delivered what was asked of him. Behind the front duo, Vettel had been steadily closing in on third placed Leclerc and claimed the final podium position with a move up the inside at Turn 1 with two tours to go.


Also by Graham Read...
Mercedes On Top After The Opening Three Day TestAlfa Romeo’s C39 Completes The F1 Class Of 2020The Williams And Racing Point Formula 1 Car LaunchesAlphaTauri Makes A Striking Arrival﻿Mercedes’ 2020 Silver Arrow Breaks Cover
So Hamilton left Hungary with an increased lead in this year’s drivers championship and Ferrari was left to reflect on the telling fact that, although they finished third and fourth, Vettel was over a minute behind the winner at the chequered flag. The resurgent McLaren team had a decent day with Sainz fifth and Norris ninth, whereas Gasly’s tenure of his Red Bull seat must still remain in question as he could only achieve a sixth place finish, having been lapped by his team-mate Verstappen in the same car.

Bottas will face an anxious summer too, knowing that after his early problems he could only manage to finish eighth, lapped by his victorious team-mate Hamilton and all too aware that Mercedes is considering whether to replace him with their reserve driver Esteban Ocon for next year. The odds on that happening must be shortening all the time.

On a brighter note, the most welcome news for most in the F1 paddock after the race was that the sport’s annual four week summer break was about to commence, although of course for most personnel it would be more like a fortnight off at best.

The F1 circus will reconvene at Belgium’s iconic Spa Francorchamps circuit in late August where we shall see whether anyone can take the fight to the dominant Mercedes team or whether the German outfit will simply wrap up both the drivers and constructors titles yet again for a sixth year running.