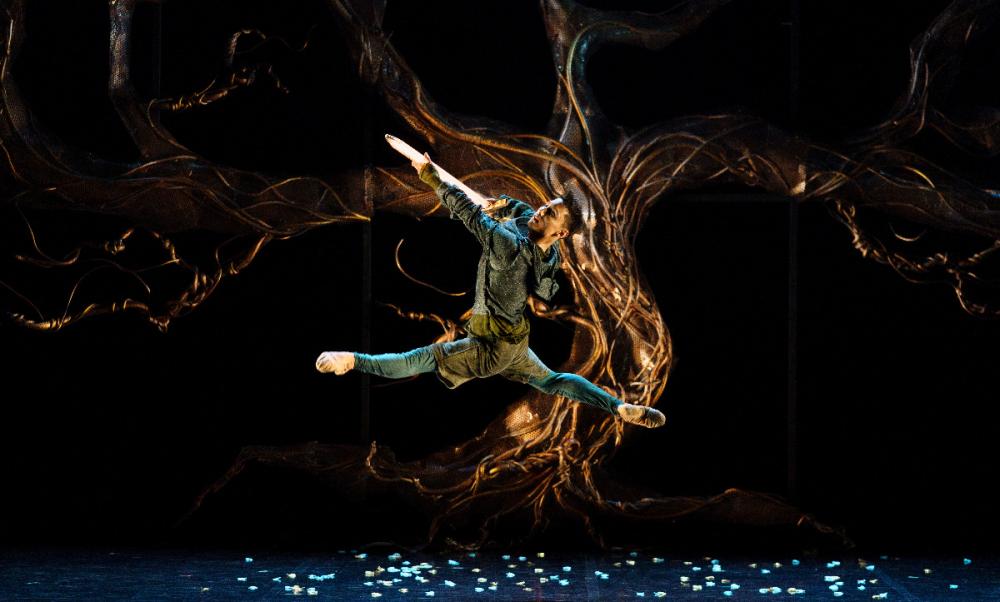 Kevin Poeung in Merlin - photo Emma Kauldhar
Merlin is probably best known as the ancient wizard in Camelot, but the story this ballet tells is of his youth, up-bringing and early adulthood.

A result of an amorous union between two Gods, The Lady of the Lake and Helios, Merlin is raised on earth having been found abandoned in the forest by a single mum working as a blacksmith.

Whilst he may be a wizard in waiting, his formative years working in the blacksmiths reveal his very human frustrations and his exasperation with his life - he yearns to experiment with his magic whilst his adoptive Mum wants him to deny his magical powers and have a traditional career in the army. In other words to fit in with what was expected rather than to follow his own dreams.

The plot sees Merlin joining the Court of Camelot as a military recruit. As in all great stories, unrequited love and relationships are at their heart and Merlin is no different. He loves Morgan, but she only has eyes for Uther and the throne. Uther has his own challenges to face. For good measure, throw in a kingdom at war, the Lady of the Lake, mythical gods, some dark magic and the seeds are sown for an epic struggle between good and evil.

He travels a journey of growing self-awareness that eventually leads him to be able to accept himself for what he is….

Riku Ito in the title role was superb –he ably portrayed Merlin’s emotional journey as much through his facial expressions as by the quality of his dancing. The same may be said of Minju Kang who took the role of Morgan whilst Joseph Taylor and Abigail Prudames (Uther and Ygraine) were convincing as lovers.

The quality of the dancing was excellent, being both energetic and expressive. There are some exceptionally beautiful choreographed scenes so full marks must be awarded to the Drew McOnie for his choreography and direction in this, his first full length ballet.

The visual element was further enhanced by the costumes which were themed throughout in teal and gold and had a wonderful fluidity of movement.

A minimal set, but creative none the less, with metal mesh and strips used to represent the trees of the forest whilst the tree of life illuminates in green and gold at key moments in the story.

You can’t have a story of a wizard without some magic and this is provided in the form of illusions by Chris Fisher and puppets designed and directed by Rachel Canning. The dragon and the two hounds were expertly handled whilst the mighty Excalibur shone brightly in Merlin’s hands.

Overall, the production is beautifully staged and well worth an evening of your time. A truly theatrical treat.