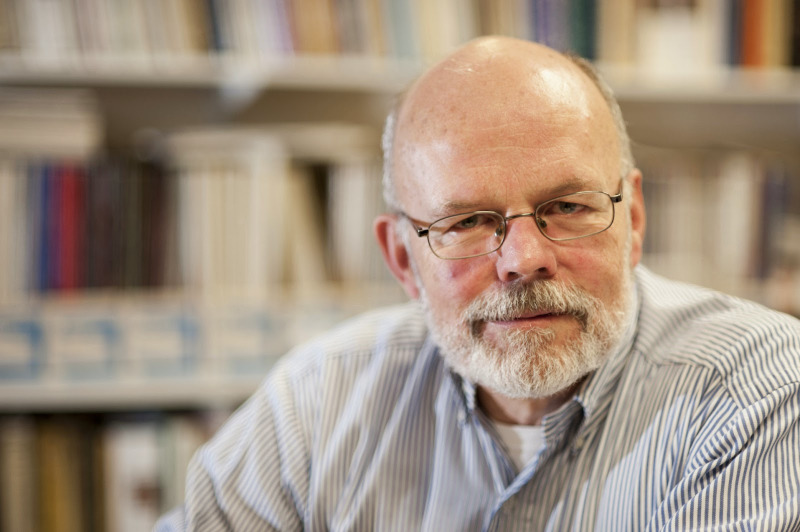 Michael Schmidt. Photo by Ben Schmidt
Michael Schmidt has devoted the majority of his life to publishing poetry. Yet even he didn’t imagine that those first pamphlets he committed to print, celebrating the poetry of his fellow students, would commence a fifty year journey with Carcanet. Fifty years and counting that is. ‘It was basically a kind of hobby,’ he says.

Then, Schmidt was in Oxford, newly arrived from Harvard after renouncing his American citizenship in revolt against the Vietnam War. Because he was raised in Mexico City, he could apply for Mexican and British citizenship, so, for the past forty years, Manchester has been his, and Carcanet's, home:

‘The main thing about Manchester is that we’re not there, but here. Getting away from London has been a good thing because there’s this tremendous, homogenising pressure in London.’

We look up at Carcanet’s office from the café as people rush by wrapped in jackets and scarves.

‘It would have been nice to have been in Cornwall though,’ he says, laughing.

I wonder, for a man whose life has been inextricably bound with the literary arts (he received an OBE in 2006), what were the formative experiences with literature and language that might have shaped the direction in which he subsequently took Carcanet? How did that hobby become, not a vocation, but his life?

‘I really loved the Elizabethans,’ he answers, ‘They are semantically very alert. Metaphors emerge from etymology. It’s so rich and the language is so alive.’ He imitates opening a small book. ‘If you read Melville and some other poets chronologically - but especially Melville before he wrote Moby Dick - suddenly, you see when he discovers a new edition of Shakespeare. It was a big, print edition because he’d never properly read Shakespeare before.’ Closing the small, invisible book, that word returns: alive. ‘It’s that wonderful sense of semantic aliveness that you get from reading Shakespeare.’

‘It can be universal; if you teach people to read the actual language on the page instead of theorising about it, anybody can read Shakespeare.’ ‘I can’t imagine a time when Shakespeare wasn’t read,’ I say. ‘There was a time when he wasn’t read as much as he is now. In the sixties, there was a wonderful theatre producer called John Barton who made actors read the sonnets for the sense and not for the feeling. If you read for sense, the feeling is there. Barton was going back to the text and saying “let’s read what’s there” and that had a huge effect because Shakespeare had become so politicised.’

It’s interesting that Schmidt should mention politics. Both he, and by association, Carcanet, have always been explicit about their devotion to the English language: his compendious 900-page history of English poetry, The Lives of the Poets (1998), really is a survey of English poetry, since the Norman and Latin influence receded on these shores in the fourteenth century. But when the Poetry Nation Review – the PN Review - was launched in 1976, there were detractors at the use of ‘Nation’ in its title.

‘Yes, we lost some friends because of it,’ he says.

How, then, has Schmidt balanced this explicit fealty for the English language with, not necessarily a non-political stance, but the allowing of a space for poetry to flourish at Carcanet.

‘So-called Standard English does have certain rules and certain patterns to be respected,’ he says, leaning into the back of his chair. ‘Kei Miller and Vahni Capildeo [both poets with West Indian backgrounds], for instance, show how their dialects respect and play against the standard dialect. There is a common language which is expressed through dialects. There’s no point in denying the common ground.’ Schmidt pauses. I imagine the names of poets and writers percolating in his mind. ‘There are a couple of nice lines in Derek Walcott, referring to the Caribbean when the British departed: “They took everything except the language / Which is everything.”’

Quoted by somebody else, this might have sounded like an overstatement but talking to Schmidt is to be exposed to something more fundamental, like that alluded to by Walcott, notwithstanding his comment on colonialism. Simply, language is not a part of life for Schmidt; language is that life.

What makes this more astonishing is that Carcanet have survived not only the financial burden of selling what is a hugely difficult product to market - poetry - but also, an IRA bomb. In 1996, when Carcanet resided in Manchester’s Corn Exchange, their offices, along with many other businesses, were destroyed by a Republican attack.

‘We weren’t allowed back into our offices for eight months,’ Schmidt says. ‘We thought everything had been destroyed - most of it had - but because we packed our archives they were saved, even though they were full of pigeon shit.’ ‘That must have been like starting again,’ I say. ‘It was a huge erasure.’

Carcanet’s renown on the literary scene was ironically bolstered by the destruction; writers, academics, and journalists rallied to their support after the bomb. The eminent literary critic and scholar, Frank Kermode, said that if Carcanet hadn’t survived it would be hard to imagine anybody else doing what they do. And he was right. Carcanet are surviving, and thriving. And although nostalgia doesn’t figure in Michael Schmidt’s repertoire, the past is important. He laments the modern, creative-writing course’s obstinate refusal to teach the history of poetry, along with the shift in contemporary poetry to performance.

‘They’re missing out on everything poetry can be,’ says Michael Schmidt

He has no worries about the poets of Carcanet though, and he leaves the final word to their, and in a different sense, our, future:

‘If you’re not interested in the past, the future won’t be interested in you. And it should be both ways shouldn’t it? Now, I’m inordinately proud of our younger poets.’ He leans forward and rests his elbows on the table. ‘Most of them do look both ways.’

The interview and article were conducted and written by Liam Bishop

For more information on Carcanet at 50: https://www.carcanet.co.uk/cgi-bin/scribe?showinfo=ip051