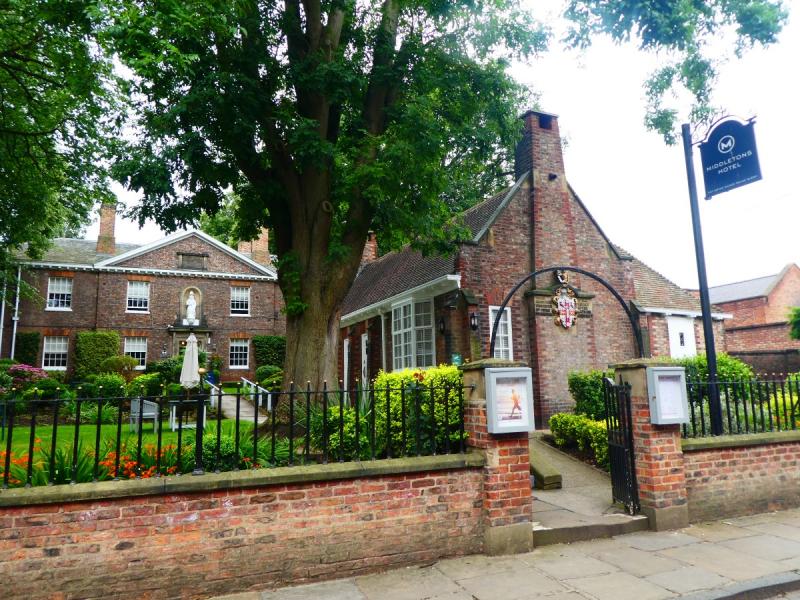 It goes without saying that York is steeped in history but if you also want to stay somewhere that is embedded in York's rich historical tapestry then the Middletons Hotel could be the one for you.

The hotel is tucked away down Skeldergate and is spread across various historic buildings. We were fortunate to stay in the Grade 2 listed Sir Joseph Terry Cottages which were refurbished internally in April to a high standard.


The Chocolate Room
The "Terry Memorial Houses" that are located in the garden of Middletons were designed by architect Walter G Pentry in 1899 funded by public subscription to the memory of the late Sir Joseph Terry. Fittingly the two cottages are named Chocolate and the other Orange!


Interior of Sir Joseph Terry Cottage
The "Chocolate" room had a boutique feel, certainly spacious the room could sleep 5 guests. With a sitting room the TV was fortunately hung on the wall so that you could actually watch it from the settee, whilst not straining your neck when looking up. In fact there was another TV in the bedroom.


Also by Graham Clark...
Turtle Bay Delivers A Taste Of The Caribbean In LeedsPopworld Is Coming To LeedsThe Winner Takes It All - Bjorn Again Are Coming To York RacecourseNot An Illusion - Leee John Is Coming To LeedsPAZZA Arrives In Leeds
With a fridge that had two small bottles of proper milk and water, a Lavazza coffee machine, tea and biscuits and a hamper that had Yorkshire goodies such as home made Parkin, Yorkshire crisps, pear and rhubarb and custard sweets you could not have wished for anything more.

There is a Chocolate Orange too hidden somewhere in the room but that is up to you to find it!

The bathroom came with a bath and walk in shower. I also liked the various plants that were dotted around the accommodation as it gave a more homely feel. They have thought of the modern traveller too as there were copious amounts of plug in points. The free Wi Fi worked well too and was fast.

It's a friendly place, upon check in the receptionist told you all you needed to know. The reception desk itself is actually an old counter for measuring lengths of cloth from the old York firm of Hunter and Small Page - a firm of high repute as furnishers and haberdashers.

The restaurant has an extensive menu from steaks to fish. My partner chose the fried hake which was beautifully cooked and delicious - the fish was fresh and flaked away.


Fish and Chips
My Beer Battered Fish and Chips was a plentiful serving - a big piece of fish with a good batter mix and chunky chips.

Desserts of my Knickerbocker Glory and my partner's Yorkshire egg custard tart served with raspberry sorbet ended a delightful meal. The background music was set just at the right level so that you could have a proper conversation.


Knickerbocker Glory
Breakfast is either a continental buffet or a cooked to order English breakfast. This too was delicious - they even have a gluten free corner.

The free car park was a bonus though the centre of York is a 3 minute walk away.

If you fancy a touch of luxury in the centre of York without wanting to break the bank I think you might have found your answer at Middletons. I would definitely return.


Also by Graham Clark...
Turtle Bay Delivers A Taste Of The Caribbean In LeedsPopworld Is Coming To LeedsThe Winner Takes It All - Bjorn Again Are Coming To York RacecourseNot An Illusion - Leee John Is Coming To LeedsPAZZA Arrives In Leeds