Midweek Beer: Nothing Better Than A Cold Bath In Harrogate 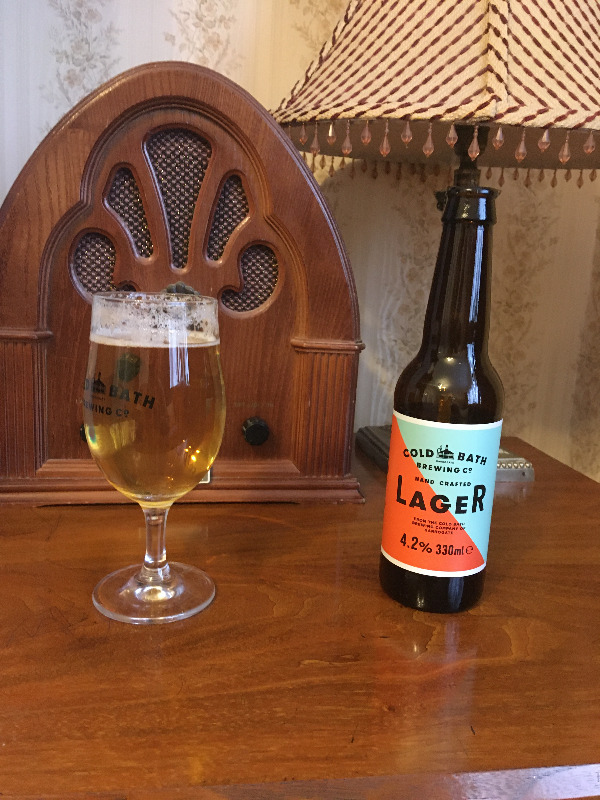 Our midweek beer is an extremely palatable lager, a drink for all seasons which appeals to a very wide range of drinkers and which goes particularly well with fine dining. It was originally inspired by the belief that craft lager could match the craft revolution and was the brain child of founder, Jim Mossman.

Jim describes having been on ‘an exciting journey of a lifetime’ ever since, in 2018, when he founded Cold Bath Brewing Co - along with two partners, ‘both with a head for business’. Roger Moxham was for many years the chief executive of Mitchell and Butler, one of the largest operators of restaurants, pubs and bars in the UK, and Mick Wren, the former owner of Hoxton North café, in the Royal Parade.

They now have more than 250 accounts, throughout the country and beyond, a remarkable achievement. It certainly has been a meteoric rise for the Harrogate-based company which now finds itself dining with the elite. Or to put it another way, their four core ales are now served not just in their own two craftbars in town, but across Yorkshire in Michelin-starred restaurants and haute cuisine hotels. Indeed, just today, he has been working on a collaboration with one of Leeds’s most famous chefs, Matt Healey, who has restaurants in that city and in York.

The firm obviously takes its name from the road into town, now a lively upmarket area with many fine restaurants and bars. The road's nomenclature dates back to the 1880 when St Magnus’s Well, or the Cold Well, was uncovered, one of many in a spa town, the purity of whose waters were first recognised in Roman times - and ideal for brewing.

From the moment they secured the former tyre depot on King's Road, directly opposite the Conference Centre, they have not looked back. Initially they received invaluable technical assistance from Sean Franklin, a legendary figure in brewing circles, described by Jim as the Godfather of craft beer in the UK. ‘What he doesn’t know about brewing isn’t worth knowing’.

Almost overnight they found their brand had become famous - ‘synonymous with Harrogate’ - chiefly through the sincerest form of testimonial, word-of-mouth recommendation. At first this came chiefly from people who had been drawn to the taphouse, with its remarkable ambience, the opportunity to sit in the heart of Harrogate, beneath stainless steel brewing equipment up in the gallery. Later the word was spread by people who dined in local restaurants.

Jim says, still with an element of incredulity at their success: ‘Who would have thought that a craft lager would appeal so strongly to the fine dining market, formerly the place for wine drinkers.’


Also by Andrew Liddle...
King Neptune's Baptism Of FireWhy I Didn’t ClapThe Pub ReopensBeer Of The Week: Selby Blonde From Jolly SailorBeer Of The Month Of July: Leeds' Incomparable Best
He puts the success down to the fact that ‘We use pale malts and continental yeast strains to create a clean, crisp base. Traditional European hops add complexity and subtle flavours more commonly associated with ales. Gentle carbonation allows the slight bitterness and delicate spice notes to shine through.’

I can confirm that it is indeed a remarkably special lager, piquant, zesty and fruity, enormously refreshing and, to my palate, very nearly a pale ale.

At present, Jim and the staff are readying themselves for re-opening on July 4th. ‘It looks like cleaning staff are going to outnumber bar staff, we’ve got so many things to sanitise and keep that way.’ Does he expect many changes? ‘Clearly the landscape has changed’, says Jim reflectively. ‘At the moment there are no sight lines. We’ll just have to wait and see.’

One thing seems clear: those with a taste for Cold Bath Beers, and who have continued to consume it during the pandemic in bottles and minikegs, will be flocking back at the earliest opportunity.