The Formula 1 circus remained at Silverstone for a second race following the dramatic closing stages of last weekend’s British Grand Prix and, after an increasingly bitter inter-team war had broken out off track, it was Red Bull’s mighty Max Verstappen who ended Mercedes’ domination of victories so far this season despite the latter again looking invincible prior to the race. It was Red Bull’s first win at Silverstone since 2012. 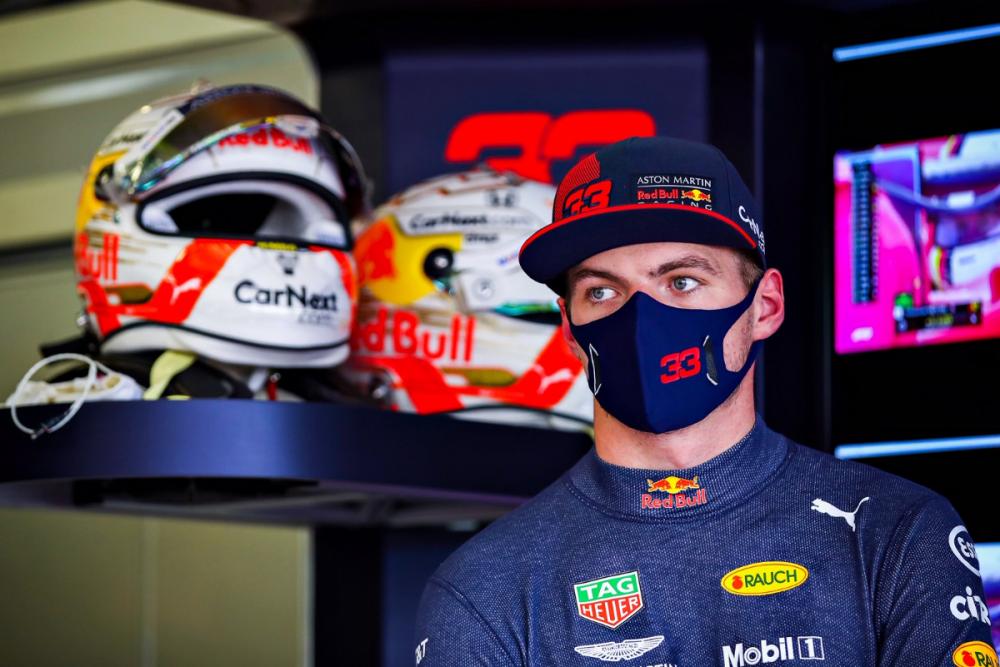 Max Verstappen showed true class as he led the Mercedes duo home
The event was given the apt title of the 70th Anniversary Grand Prix as back on 13 May 1950 the first ever Formula 1 championship race was held at this former RAF airfield in Northamptonshire, and it was a shame that an event which was intended to be a superb commemoration of 70 years of Formula 1 motor racing was somewhat tarnished and overshadowed by the escalating row about the copying of parts, about which I’ll expand further below.

Again the pandemic meant that all the ontrack action had to be held behind closed doors without any fans and only very limited media allowed to attend. Of course tyres and the failing thereof were the initial major talking point. With last week’s failures being mainly related to the teams trying to run the hard specification tyres for longer than intended following Kvyat’s big off early in the race, the softer tyre choices already selected for the 70th Anniversary event were retained as they would encourage more pit stops and thereby increase safety. A new section of kerbing was also installed at the exit of Becketts and before Chapel corner to help drivers adhere to track limits and reduce stress on the tyres at this section of the track.

Racing Point advised on Thursday afternoon that they had received confirmation from Public Health England that their driver Sergio Perez had completed his quarantine period after testing positive for coronavirus the previous week and that the results of a further test were awaited. Unfortunately for the Mexican, this again proved positive and so, although feeling well, he had to stay away from the F1 paddock and Nico Hülkenberg continued to deputise for him. The likeable German was very much hoping that this time he would actually make it to the grid for the race without any technical gremlins intervening as last Sunday. 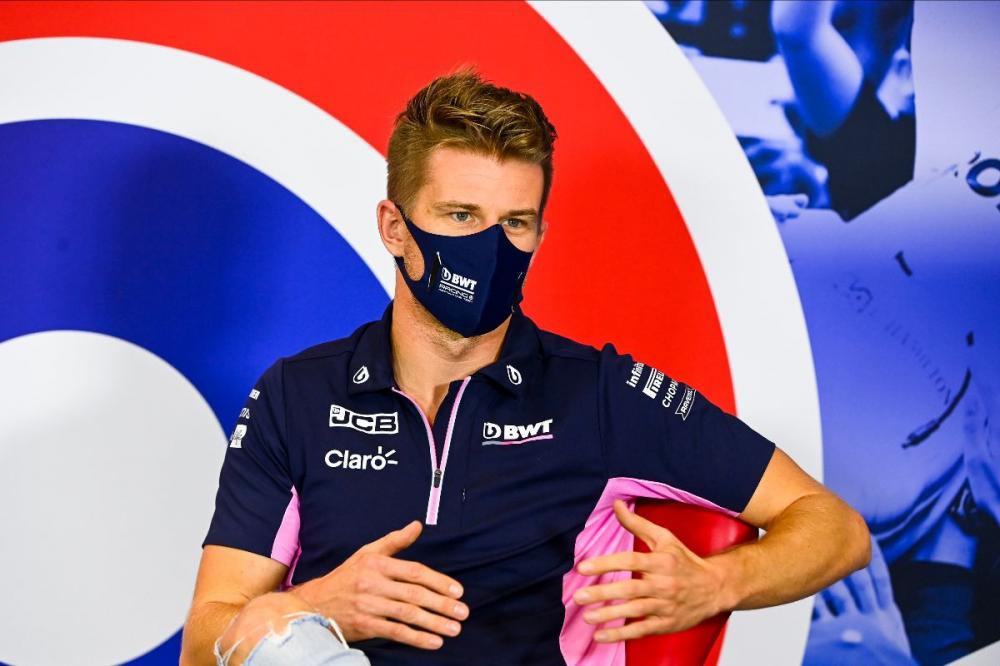 Nico Hülkenberg was delighted to get back behind the wheel for Racing Point again
The Silverstone based team very much remained in the news on Friday morning too when FIA stewards adjudicated that it would be fined 400,000 Euros and lose 15 Constructors Championship points in relation to the Mercedes related design of the rear brake ducts on this year’s RP20 car. The officials even revealed that in early January this year Racing Point received from Mercedes a complete set of brake ducts from their 2019 car.

Racing Point felt very aggrieved about the judgment, whereas other teams, including Renault, felt they had been let off lightly for the advantage already gained and still to be gained further throughout the rest of this season, asking how parts which were found to be illegal could still be allowed to remain on the car. So, the stewards’ decision seemed to please no-one and on Friday evening we learned that Ferrari, McLaren and Renault were intending to appeal against the judgment, including a wider desire for it to be clarified just how much a car can be copied from another team’s successful design. The following day Racing Point declared its own intention to appeal too, in the hope of clearing its name, whilst Williams joined the other three teams looking for a more severe penalty. This issue will take some time to be resolved as it heads to the International Court of Appeal with plenty of lawyers involved.

Elsewhere in the paddock at least Valtteri Bottas, like Hülkenberg, was a man with a smile on his face. A deal to remain at Mercedes beyond the end of this year was agreed in principle a few weeks ago and the contract extension was officially confirmed on Thursday, the Finn having competed for the team alongside Lewis Hamilton since 2017.

Mercedes team principal Toto Wolff was not a happy chappy though on a different front as he was refusing to commit his team to the new Concorde Agreement, which most others seem happy with and which is set to make a more equitable distribution of F1’s prize money with effect from next year. Wolff feels his highly successful team deserves to retain a larger piece of the cake, closer to the current situation, but F1’s owners Liberty Media, who have been working on the new Agreement for some time, have set a deadline of 12 August for teams to sign up so that the sport can move forward without further ongoing arguments about money and governance.

Over in the red camp there is a willingness to accept the new deal, with Ferrari team principal Mattia Binotto saying “I hope Mercedes will sign as it would be great to have them with us next year, but it’s up to them to decide”. Binotto had been the iconic Italian outfit’s technical director before stepping up to the main job last year, but he had carried some of his former responsibilities forward with him. However, following a recent restructuring he is no longer directly involved in the team’s technical operation, a welcome move as he always seemed to be a man with too many demands on his time. 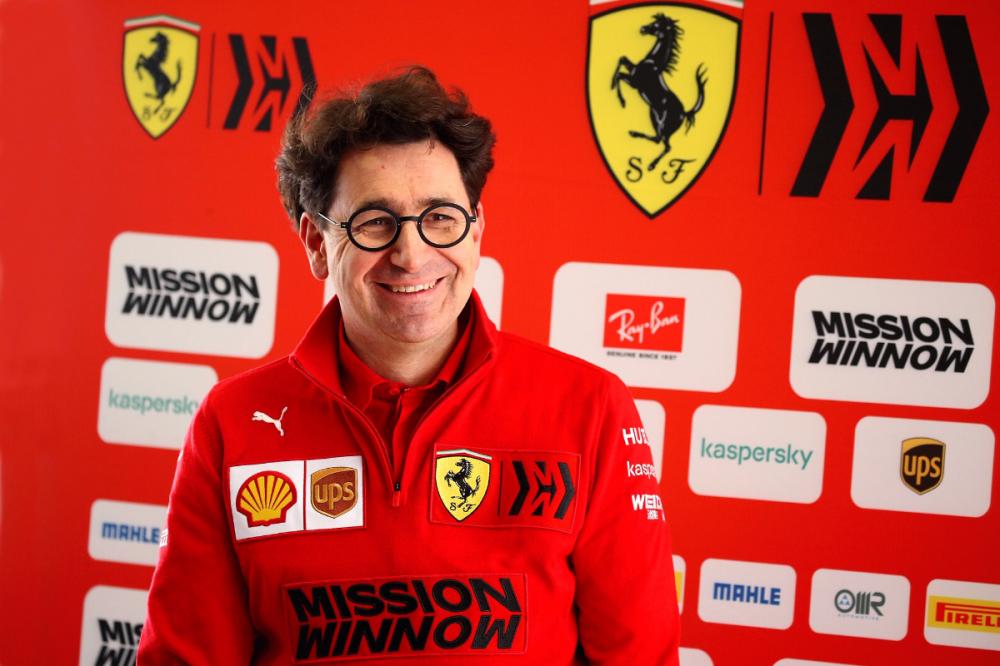 A restructure at Ferrari has eased the burden on team principal Mattia Binotto
Turning to the ontrack action, it came as no surprise in Friday’s pair of opening free practice sessions when the two Mercedes cars again continued to dominate proceedings, with Bottas edging out Hamilton in the morning before the order reversed in the afternoon. Best of the rest honours were shared by Red Bull’s Max Verstappen and subsequently Renault’s Daniel Ricciardo, although both were well off the pace of the black cars. Meanwhile Ferrari’s woes continued as in the afternoon session Charles Leclerc was only seventh fastest and Sebastian Vettel was down in 14th position before a late power unit failure forced him to grind to a halt on track.

The predictable pattern continued in Saturday morning’s final practice period as the Mercedes duo again topped the timesheets, with McLaren’s Lando Norris third quickest, and then we had more of the same again in qualifying as Bottas beat Hamilton to pole position. Hülkenberg put in a superb effort to claim third place on the grid for Racing Point, if almost a second slower than Mercedes, a gap which is an eternity in F1 timescales. Of course Racing Point being literally best of the rest behind Mercedes and even ahead of fourth placed Verstappen only served to fuel the fires of those teams appealing for a greater punishment for the pink cars.


Also by Graham Read...
The Pandemic Forces Further F1 Calendar ChangesA 100th Pole And A Sixth Spanish Victory For HamiltonHamilton Extends His Championship Lead In Portugal﻿F1 Approves Sprint Races At Three 2021 Grands PrixDoncaster’s Ewen Sergison Claims A Podium Finish In Monaco
The conditions were hot and sunny as the pit lane opened for the cars to head to the grid and it was a relief to see Hülkenberg make it. Alongside him on the second row Verstappen was the only driver in the top ten starting on hard specification tyres, which would normally make his Red Bull slower off the line but provide greater strategic options as the race developed.

Despite the lack of fans present there was still that usual tension as the race start approached and when the red lights went out Bottas led from Hamilton, but Verstappen simply shot past Hülkenberg into third place despite his hard tyres. Initially the two black cars began to edge clear, but Verstappen pegged the gap before then closing on Hamilton as the front duo suffered from blistering tyres in the heat. Bottas and Hamilton pitted in quick succession for hard rubber, handing the lead to Red Bull’s Dutch charger.

By lap 21 both Mercedes cars were already starting to struggle on their new rubber as Verstappen was faster despite still being on the tyres he started the race on and it was clear that Red Bull’s strategy and Verstappen’s management of his tyres were really starting to pay dividends. 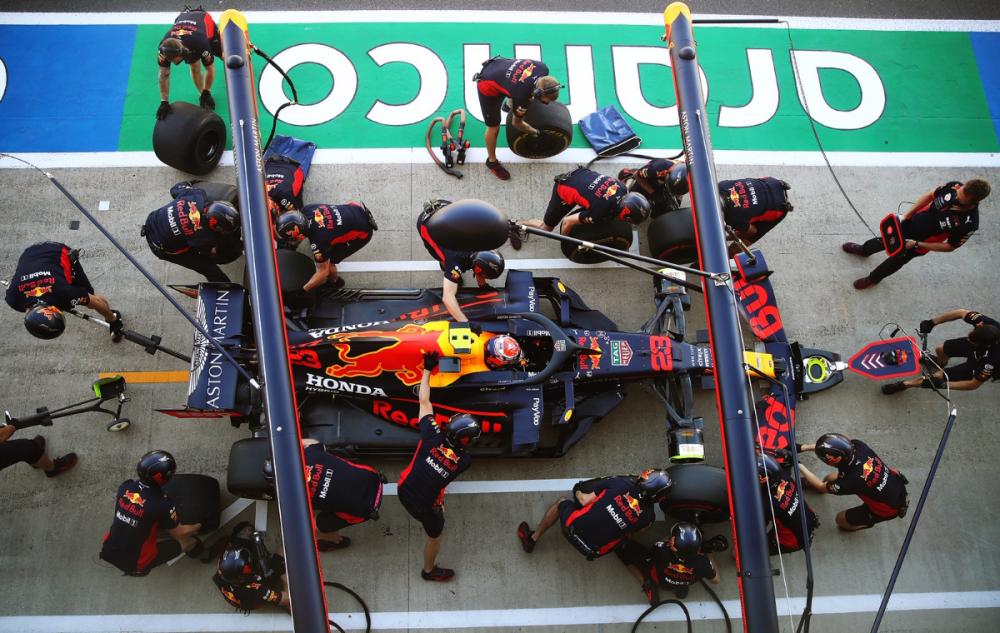 Red Bull pit stop practice before a strong race day performance
On the 27th tour Verstappen pitted for medium rubber, but quickly regained the lead from Bottas with a superb manoeuvre around the outside at Luffield. Then, just a handful of laps later the pair both headed down the pitlane again for hard tyres, with Hamilton inheriting the lead on increasingly worn rubber. It was highly unlikely that the championship leader could have survived to the end of the Grand Prix and, with ten laps remaining, his team pitted him for hard tyres.

Rejoining in fourth position, Hamilton passed Ferrari’s Charles Leclerc and then Bottas, who was struggling on older tyres, and so the podium trio at the chequered flag comprised of Verstappen and the Mercedes duo, with Hamilton picking up the extra point for fastest lap. Leclerc was delighted to finish a fine fourth after a one-stop strategy and fifth place for Alex Albon gave further reason for a party within the Red Bull bubble afterwards. It also hardly went unnoticed that Lance Stroll and Hülkenberg finished a strong sixth and seventh for Racing Point. 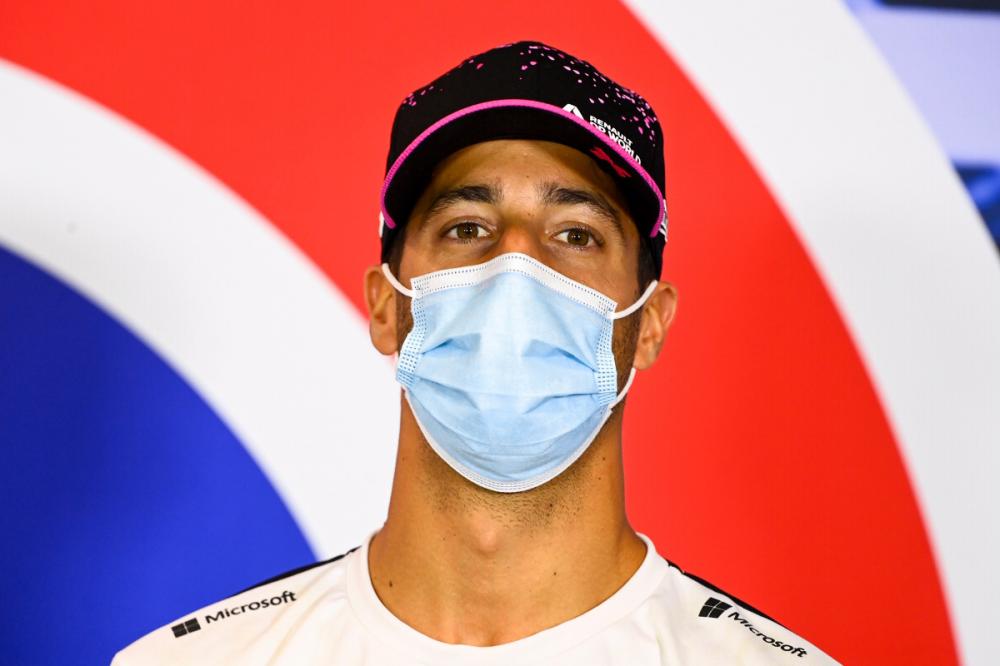 Daniel Ricciardo, displaying an F1 driver’s muscular neck, finished a disappointing 14th for Renault
Next up in this second tripleheader of races on consecutive weekends comes the Spanish Grand Prix and so, as soon as the chequered flag had flown at Silverstone, the teams were already busy packing up, ready to relocate south to the Circuit de Barcelona-Catalunya. This of course is subject to the difficult pandemic situation in that part of the world still allowing Formula 1 to travel there and hold a full race weekend and also subject to France not closing its border with Spain as so much is transported by road between Grands Prix in Europe.

Mercedes had very much proved to be quickest at Barcelona in pre-season testing, but we shouldn’t have long to wait to see whether at least Red Bull can keep taking the fight to them.