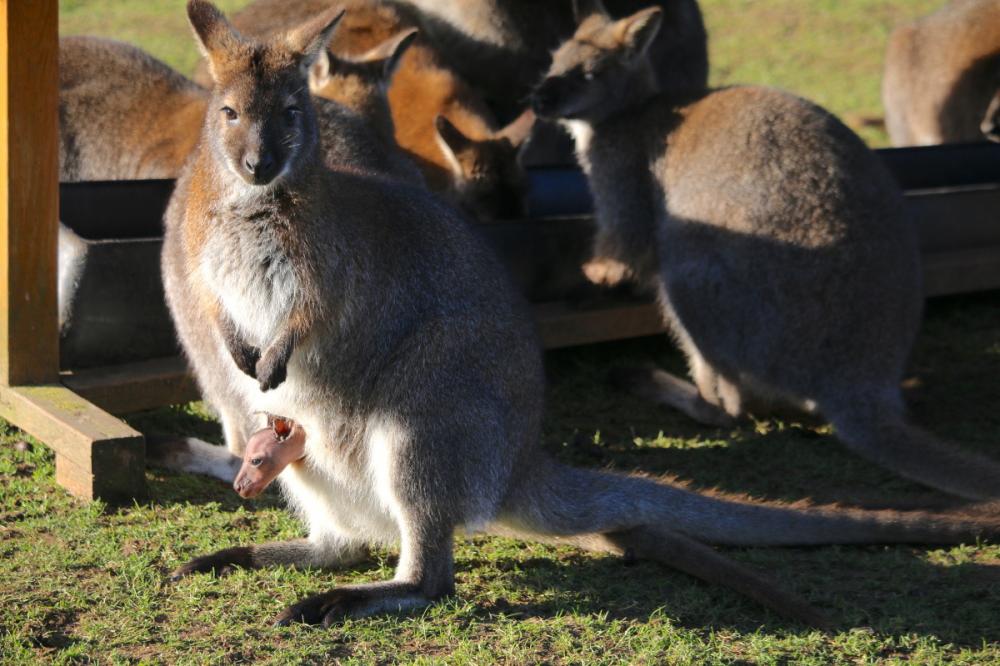 A wallaby, who recovered after being shot by thugs, has given birth months after being left for dead and is now spearheading the Yorkshire Wildlife Park Foundation campaign to raise funds to help crisis-stricken wildlife in Australia.

New mum named Wilding, who was nursed back to health and rehabilitated at the award-winning Yorkshire Wildlife Park after the sickening incident, and her baby are both healthy and thriving.

The baby - a joey – will stay in Wilding’s warm, safe pouch for at least the next 3 months before venturing out into the world but he (or she – as rangers don’t yet know the sex of the joey) is regularly seen peeping out of the pouch and watching the world go by in the Wallaby Walkabout. A joey stays in the mother’s pouch until they can no longer fit but will only start standing on their own at around six months old.

“It is such a wonderful ending to her horrific story and everyone here is delighted with the news and their progress,” said Daniel Messer, deputy animal team leader at the park, at Branton, near Doncaster.

“We are all so happy to have a new addition at the park but the fact that Wilding is the mum after all that she has been through makes it that little bit extra special.”

Wilding was shot on a common in Berkshire, in August, by a group of teenagers who filmed the incident on a smart phone, the wallaby, who was believed to have been living wild in nearby woods, was wounded but managed to limp away and be rescued later.

She was named Wilding after the Game of Thrones characters because of her resilient nature and was given a new home at the Wallaby Walkabout at Yorkshire Wildlife Park where she slowly recovered her health and surprised rangers with the birth of her joey.

The joey has been named Aruma - the Aborigine word for happy.

Thousands of wallabies are among the estimated billion wild animals wiped out in the Australian bush fires. The Yorkshire Wildlife Park Foundation, which is based at the park, has launched an appeal in Aruma’s name to raise funds for wildlife in Australia.

Despite the recent cooler conditions in parts of Australia, there are still many devastating bush fires burning across the continent, with reports now estimating that 800 million native animals, such as kangaroos, wallabies and koalas, have been affected by the disaster in New South Wales alone.

Disturbing reports now claim that more than one billion animals are believed to have died nationally in the crisis, with many more injured or displaced due to habitat loss. Without the safety of their habitats, it also means that native species are increasingly more vulnerable to harmful predators.

YWPF is proud to be working with the Zoo and Aquarium Association, Australasia (ZAA) to raise money for the wildlife affected in Australia.

The ZAA is formally coordinating a phased response for immediate support, the emerging needs of affected wildlife and also the longer-term requirements of wildlife and habitat rehabilitation, rewilding and population sustainability.