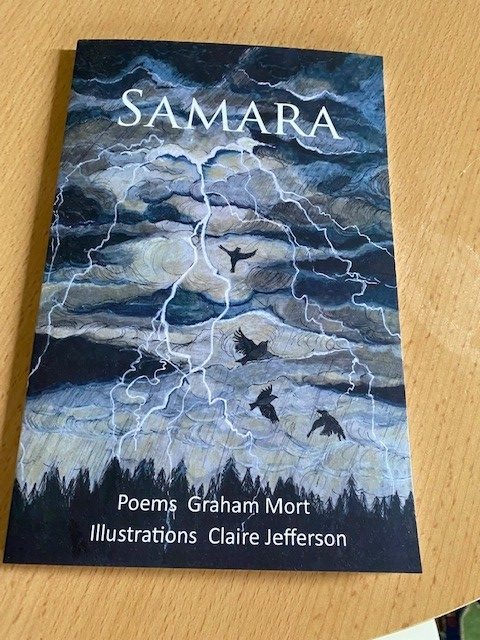 A sense of Ted Hughes is inescapable in Graham Mort’s powerful new collection, though he might not thank you for the inference: the ‘dwarf god growing / into lordship of its world’ in ‘Froglet’, and the lizards silent on stones, adored by the heat of the sun in ‘Waking in Picardy’, both anthropomorphically aggrandize the stature of the animals and suggest a centred, focused power not shared by their observer in the benighted shadows. Samara is a very beautiful suite of poems and illustrations, which takes as its central theme a vision of a steroidally-enhanced landscape, as though casting the reader into a familiar yet fundamentally separate world of titanic exposure and elemental mystery. Mort’s images distort perception, abandon his audience to the raw instinct of stimulus and response, to a cataclysm interpreted only in the minds of the sentient.

This is fine, delicately wrought writing, even in the skewering of bloody instinct.
The separation of the human from the animal world resides in our capacity to re-invent and transmit all we see in metaphor, to point our antennae skyward, and to give wings to fear and trepidation. Mort’s poem of unseen kinetic energy pulls at the kite’s strings to describe a universe in maelstrom, of careening birds and unanchored figurative possibility. ‘Storm Larks’ is as breathtaking as Hughes’ brazenly atmospheric ‘Wind’, and it yields, in its entirety, a monument to the elements, a sense of awed subjection before the ‘stunning’ and blitzing of the air. The ‘faltering’ of the narrator’s breathing is an apposite physical reaction to anxiety, underlining a remote, primeval connection to the instinct for flight. The apprehension is palpable:

‘We’re sheltering by this gable-end, watching
the town blitzed to monochrome, seeing skylarks stall
then fly on singing into the air’s stunned height.’ 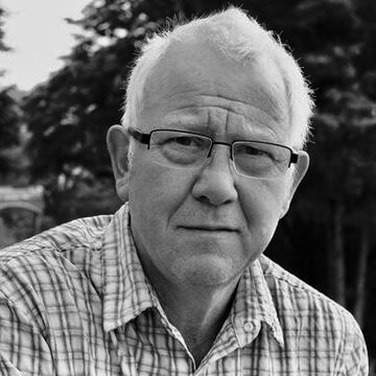 Graham Mort
And above all a sense of something above and beyond our reach in the effortless magnificence of secret animal knowledge, that confers the authority of ‘attenuated hope’ and describes a limitless capacity for endurance and survival. We are repaid in multitudinous spades for our doubt, as dark regiments of jackdaws squat squarely on our rooves, as stoically immoveable as Ukrainian soldiery:


‘We never thought they’d wait, squat the republic of our
roof, biding there like facts, their kind of
patience stark as poverty or war.’ (‘Jackdaws’)

Claire Jefferson’s brilliant illustrations share a commerce of rigorous detail with Graham Mort’s poems, accompanying each with a velocitous tableau that acts to echo the studied rhythm of the words. Not least in the striking skyscape of the ‘Storm Larks’ image, whose airborne birds are flung into the vortex as though abandoned to the apocalypse.
Foregrounding them against the backdrop of shifting skies or limpid water, Jefferson imbues her birds with an inner energy, lit by the suggestion of sudden bursts of electricity. Hinting at a worthy consonance of artistic and poetic intention, the illuminating introduction to Samara is perhaps wrong to question the potential for appropriation of anthropomorphism: here, instead, is the innocence of a learning process, a genuine desire to find marks of recognition in nature, even as we are subsumed into the fabric of false identifiers; the observer is engaged in contribution, not subtraction.

Mort reifies Jefferson’s attention to pictorial detail in clottings of colour and movement
The distance between the human and the natural worlds, and between humans and other humans – we remain, as Mort suggests, fundamentally separate – need not obviate the urge to find connections. His poems do so without recourse to introspection: given up to moments of acute observation and insight, Mort’s words are vehicles of reverence, moving towards identification whilst being obliged to accept the ‘life force beyond inscribed media, beyond our selves’. And his poetic contribution teems with a sense of purpose, as though it were possible to animate irreconcilables in the drama of metaphor. Mort reifies Jefferson’s attention to pictorial detail in clottings of colour and movement. ‘Metalwork’ is an alchemy of the polychromatic tincture of water and base-metal, of the silvered sibilance of the sea trout and the salmon, forged into a sense of ‘Everything becoming / something else'. Consistent to its underpinning metaphor, the poem betrays constancy as it illuminates the power of the mutable, like the heron, whose ungainly uplift is rendered negligent by the brutal and incisive purpose of its ‘bright / steel dart, acetylene eye’.

This is fine, delicately wrought writing, even in the skewering of bloody instinct. The title poem, ‘Samara’’s fragility of tone is cross-hatched with Jefferson’s complex illustration of a network of roots and airborne sycamore seeds, whose filigree structure echoes, in turn, the insect wings of Mort’s words. The melding of the past with the present, the transforming of hope into possibility, is conceived in the contemplation of a single, otherwise unprepossessing, detail in nature. Gifting the narrator a means of mental escape, the natural impulse, if not the formal accoutrement, is Wordsworthian:


‘A sycamore seed on the roof outside my window
stuck to slates wet with rain. Little insect wing

if I could enter your vortex of air, I’d be inside that
giant tree in the legend of our childhood , its green

In many ways a thematic departure for Graham Mort, Samara never loses that sense of being in the place and the moment which gives a kind of definition to his oeuvre. One of the finest poems in this brief but astonishingly vibrant collection finds a transfiguring solemnity in a vision of the moon, judged from a distant vantage point. Alone, save for a roan mare and a passing horse and rider, the narrator’s impression of the ripening moon at dusk embellishes its enigmatic scale to the point of illusion, yet its symbolic authority is preternaturally invoked as it actuates into movement ‘towards a snow- / dappled ridge’. The final quatrains of ‘Moon Illusion’ foregather the totems of primitive instinct, of unexplained inference, of death and unknown purpose:


‘Moss on the paddock fence is
this amazing green; my heart
pads out towards night’s deepest
shades; the licked moon’s

illusion; the mare’s inexplicable
loss; the way all sense of scale
is changed this close to dying
where everything is huge.

Samara is published by 4Word Press
More information here
Also by Steve Whitaker...
Review: Ings Strings At Art In The Dale, Kirkby MalhamPoem Of The Week: 'This train has left the city ...' by Paul HenryAlbum Review: Staring At The Sun: Talking About X By JARRPoem Of The Week: 'Giorno Dei Morti' By D. H. Lawrence (1885-1930)Inhabiting The Night: The Book Of The Barn Owl By Sally Coulthard