This month, Leeds’s own incredible glass harp is set to strike a chord with visitors to a new exhibition celebrating hundreds of years of the city’s musical memories.

Made in 1820 by Leeds craftsman Joshua Muff, the glass harp is a beautiful example of an instrument which first became popular in the 18th century.


Kitty Ross tunes up the Georgian glass harp which will be on display as part of Sound of Our City
Played by running a chalked or moistened finger round a series of glasses of different shapes and sizes, the instruments were even played at concerts in London and Copenhagen by maestros such as Richard Pockrich and Christoph Willibald Gluck. 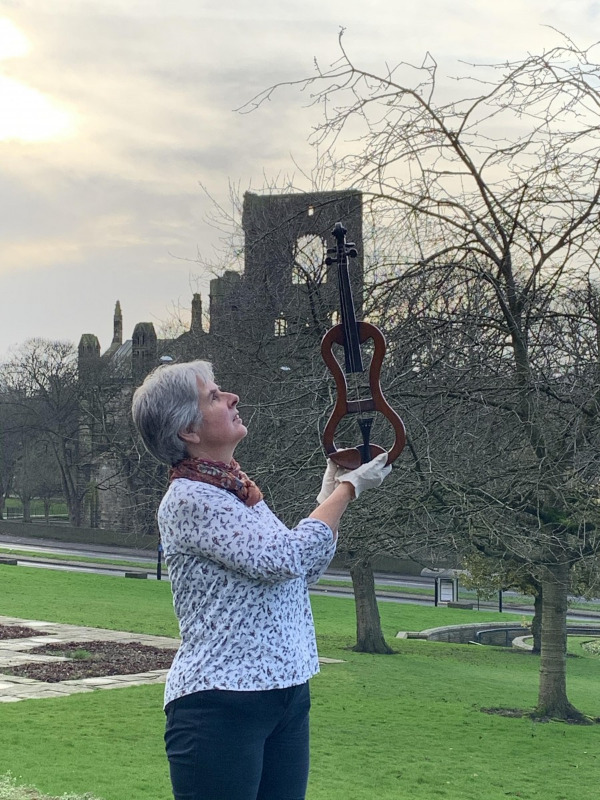 Curator Kitty Ross with a mute or skeleton violin dating from around 1880. The design allowed musicians to practice without making too much noise.
First acquired by Leeds Museums and Galleries collection in 1953, the Leeds glass harp is set to star in the Sounds of our City exhibition when it opens at Abbey House Museum later this month.

Kitty Ross, Leeds Museums and Galleries’ curator of social history has been bringing a huge range of instruments and Leeds music memorabilia together for the exhibition.

She said: "The glass harp is a really beautiful and unusual example of the many different ways music has inspired people from different eras to create new ways of making sound, performing music and expressing themselves.

"Leeds has an incredibly rich and diverse musical history stretching back hundreds of years. The city has been home to superbly skilled artisans who created beautiful instruments, a leading centre for the manufacture of vintage gramophones and radios and a host for some historic concerts by iconic stars.

"This exhibition draws on that history as well as the individual stories, memories and experiences which have made music such an important part of the lives of people from communities across the city."

Sounds of Our City includes other exhibits which explore how we first encounter music at home and school, Leeds-made instruments and sound equipment and some of the different venues associated with music in the city over the past 200 years.

Other objects on display will include a stunning newly-restored 1850s Dearlove double bass, made in Leeds and a skeleton or mute violin from around 1880, which was used by musicians so they could practice more quietly.

Also part of the exhibition will be a song book, featuring a song entitled This is our Opening Day, which was written and performed for the opening of Roundhay Park in 1872.

The song was written by a local estate agent and has been newly performed and recorded for the exhibition by a group of local students.

Sounds of Our City will also include a series of workshops inspired by the exhibition, including a talk on forgotten women composers and a session on Roundhay Park’s part in live music in Leeds, which will look at a series of personal recollections, photos and objects.

Sounds of Our City opens on January 25 and runs until December 31. More details on the exhibition and workshops can be found at: https://museumsandgalleries.leeds.gov.uk/events/abbey-house-museum/sounds-of-our-city