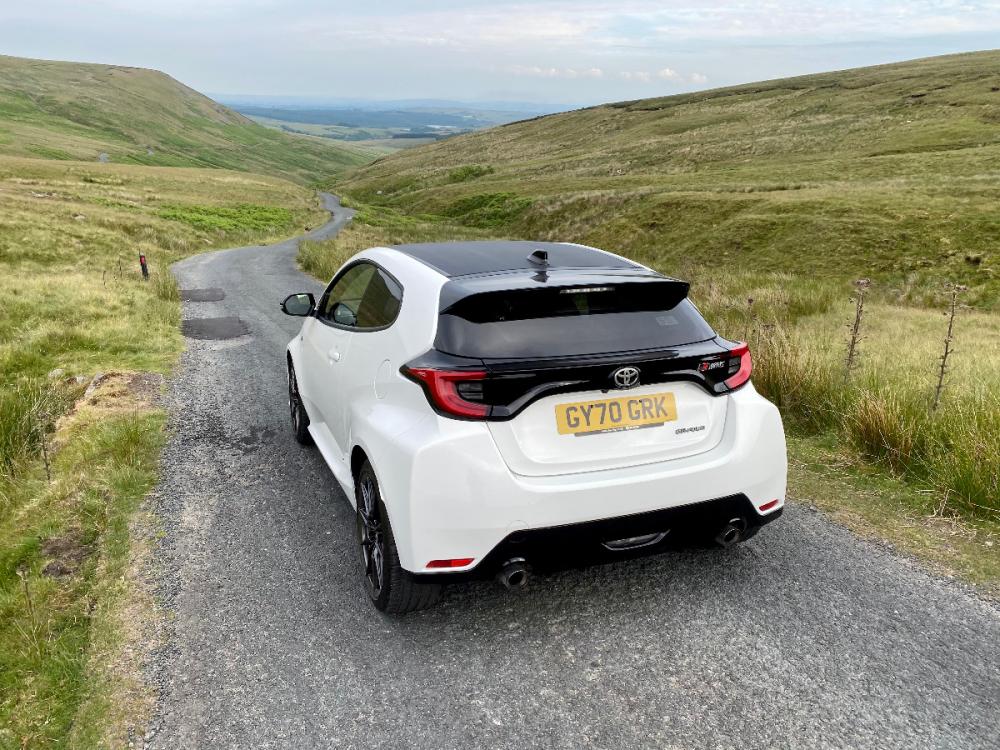 A couple of test cars from the good folk at Toyota was a good way to start. I’ve owned my Landcruiser for 14 years and it continues to give good service. It sits idle too much these days, usurped by the shiny metal that passes my way.

The Highlander would be a good replacement, seating seven and feeling more modern to drive. However, it was the GR Yaris that I was eager to get my hands on and the pocket rocket did not disappoint. For those unacquainted, it is effectively a rally car for the road and every mile covered was a delight. Razor sharp handling, sparkling performance and yet quite civilised enough to use as any other Yaris. It says it all that it is sold out for 2022, with long term supply uncertain. 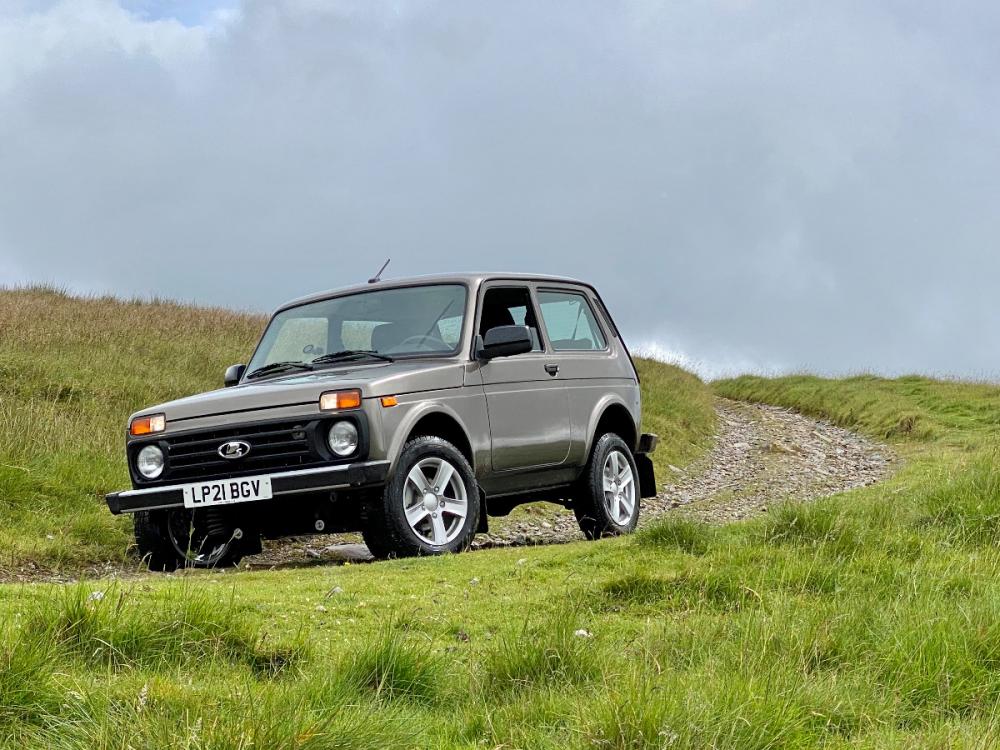 ‘Old school Lada Niva still on sale‘
I was also afforded a brief drive in a Lada Niva – remember them? This left-hand drive Soviet 4x4 is still being imported into the UK in very small numbers, though with production due to end, not for much longer. Slow, noisy, capable off-road and boasting an interior with an overpowering aroma of cheap rubber, it proved to be quite engaging. From £16,995 if I have piqued your interest. 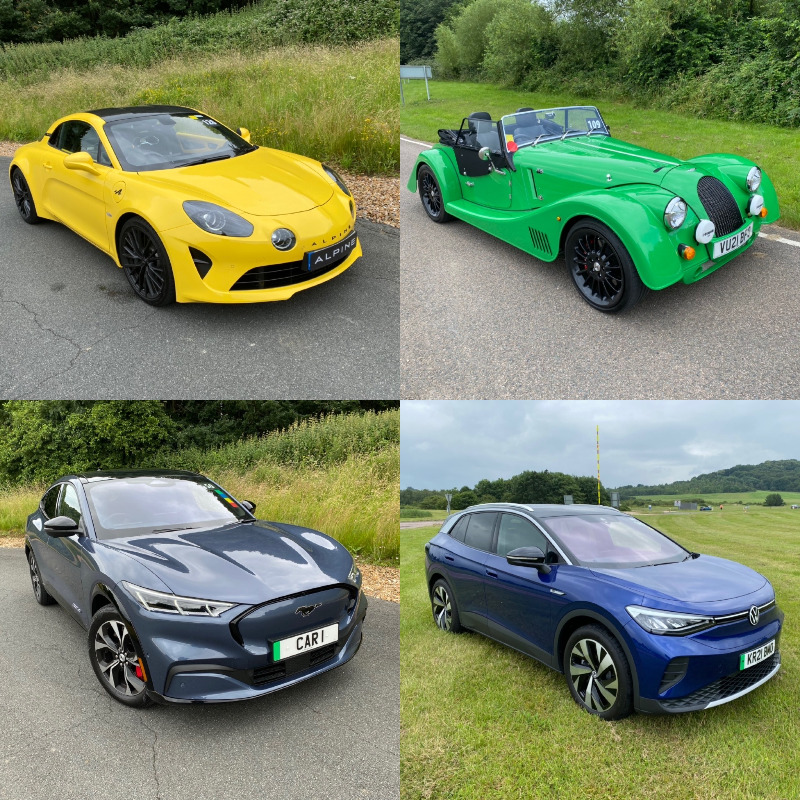 ‘Millbrook test day - a calendar highlight‘
Other test cars for the month came courtesy of Volvo, their XC40 and XC90 SUVs proving to be agreeable charges. Lovely interiors, a classy image and ever-improving hybrid powertrains are the highlights. Highly recommended.

A trip south in the middle of the month saw me take in three events. First was the annual SMMT Test Day at Millbrook Proving Ground, a chance to catch up with fellow journalists and manufacturer PRs. Always a useful day, I was able to briefly sample a selection of cars had yet to drive. A Morgan Plus 6 proved to be the most thrilling around the Alpine hill route, but the Alpine A110 and Toyota Supra weren’t that far behind. 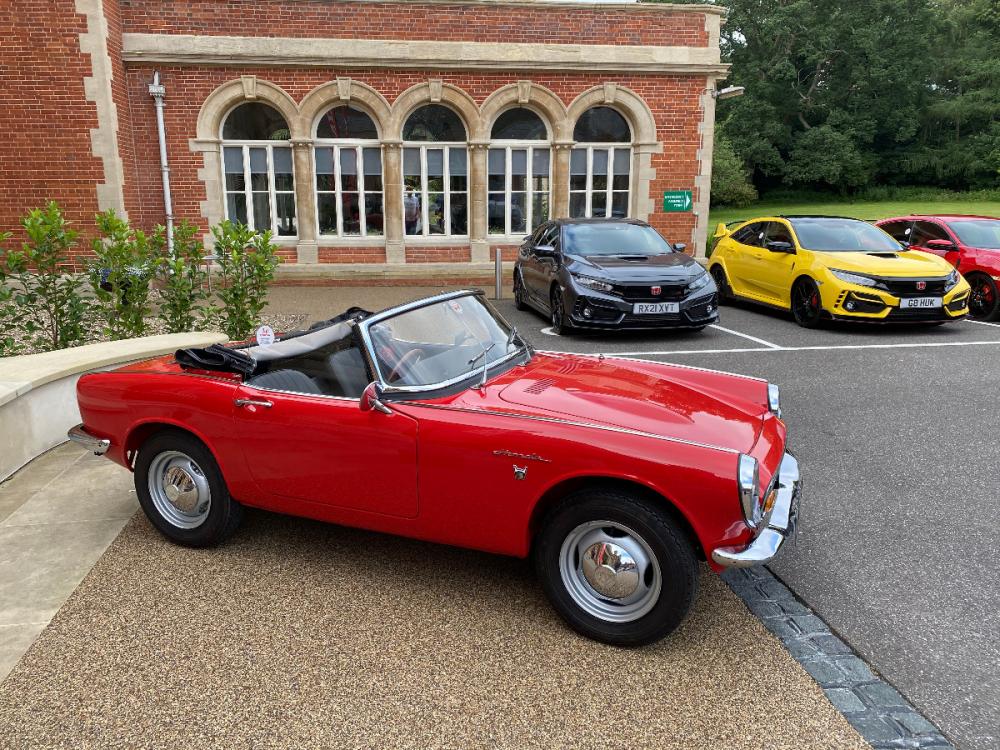 ‘Diminutive S800 - a highlight of Honda’s drive day’
After an exhausting day it was on to a Honda range day, the undoubted highlight of which was a brief drive in their newly restored S800, part of their extensive heritage fleet. It was a car everyone wanted to drive, even though the purpose of the day was to drive their latest products, including the funky ‘e’.

Last but by no means least, was a Hyundai event, staged to primarily launch their new all-electric Ioniq 5. Distinctive looks, a spacious and comfortable cabin, refined driving characteristics and a decent range was how I summed it up in my review. 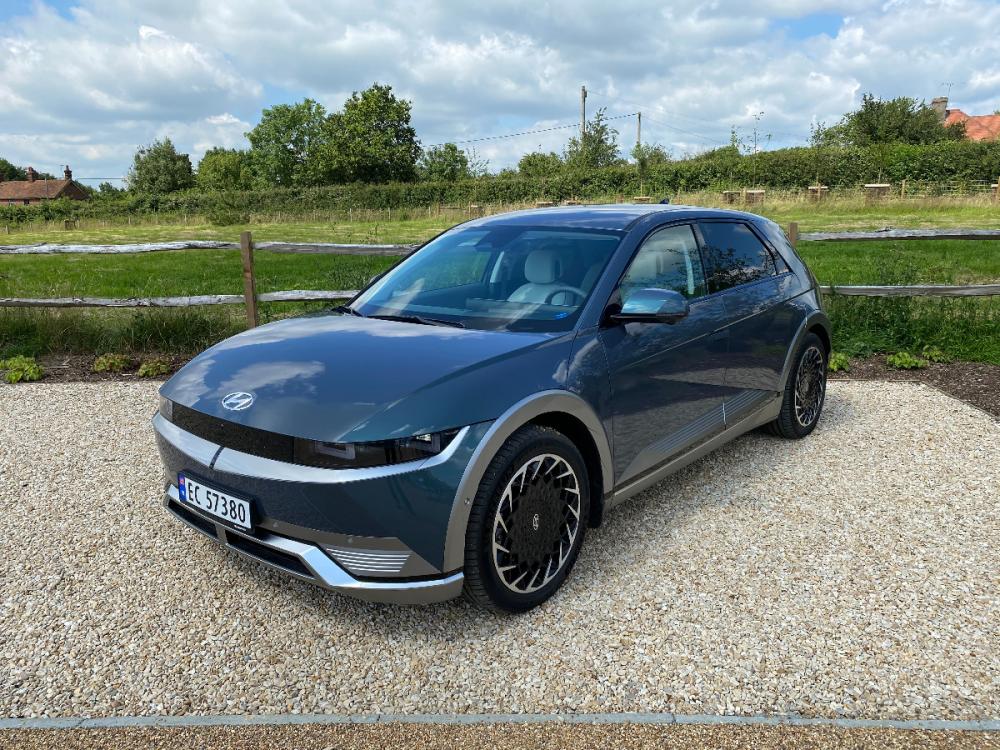 ‘Ioniq 5, Hyundai’s game-changing EV’
All too soon it was time to hit the road for a couple of local events. Mazda bought its range of cars to Bowcliffe Hall near Wetherby and with the sun shining, the quartet of MX-5s proved to be as popular as ever. Missing from the day was the electric MX-30, a shame as I was keen to try one once again.

Kia too saw the benefit to bringing their cars to Yorkshire and in sweltering heat and managed to refresh my memory by sampling five models in their now extensive range. From the diminutive Picanto to the supersize Sorento, there’s a well-built car to cater for all tastes. 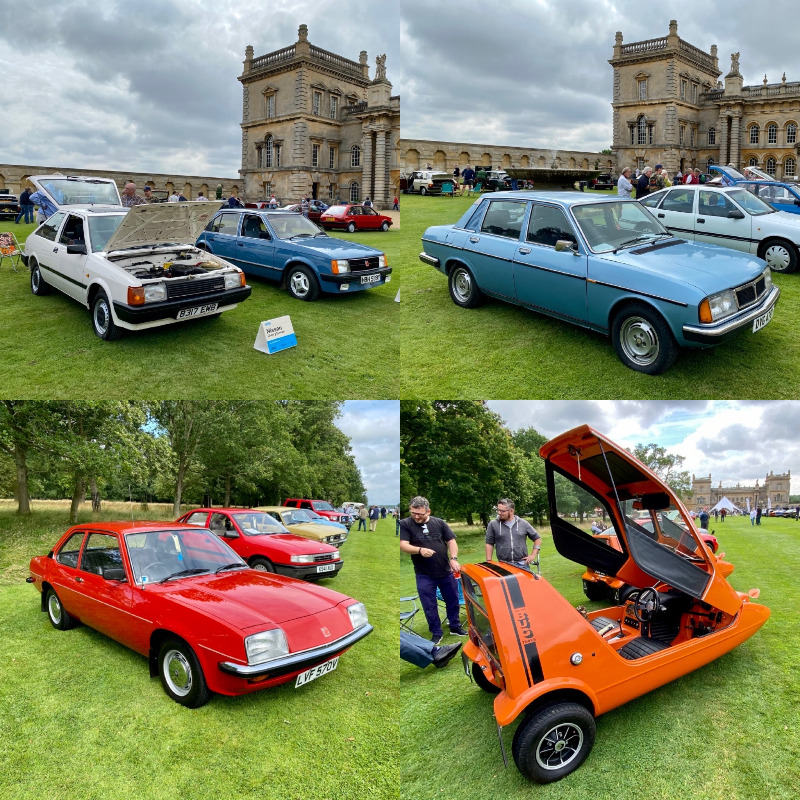 ‘Festival of the Unexceptional stars’
The event was also a chance for the Northern Group of Motoring Writers to hold their AGM, where I was delighted to be asked to stay on as chairman for a third year.

The month ended with my first visit to the Festival of the Unexceptional, held at Grimsthorp Castle in Lincolnshire.
A celebration of long-forgotten everyday family cars from 1968 to 1989, it was an enjoyable and nostalgic day in the company of fellow enthusiasts. Sure to be held again next year, book early would be my advice as they were substantially oversubscribed this year. I will definitely be back, and who knows, I might have my own unexceptional car by then in which to travel!

A thankfully quieter month as the launch diary finally calmed down. With prefect timing a couple of convertible press cars came to stay. The MX-5 made an interesting comparison with my ageing 2003 model, but the essence of what makes the car so popular was undiminished. An easy to lower fabric roof, engaging handling and enough power to have fun on the public highway without attracting unwanted attention is what sets the MX-5 apart. When mine finally gives up the ghost, I suspect I will replace it with another.

The BMW 4-Series cabrio was a much swisher offering. Room for four, lots of equipment and ample performance were the highlights. It attracted plenty of attention on a trip south for a family gathering and was a super long-distance cruiser.

It was swapped was a completely bonkers M4 Competition. Can a car be too fast for the road? With a sub four second 0 to 60mph sprint time, this 510bhp monster needed handling with care, especially in the wet.
Racing bucket seats were a challenge to get in and out of and were a tad hard after an hour or so behind the wheel. Almost £90,000 with options too. I would gladly have had the cabrio back…

From the sublime to the ridiculous, next up was a week with an Isuzu D-Max pickup. Tested in basic guise, the double cab truck proved as adept at off-roading as it was capable of hauling a surplus of detritus to the local tip. From a tad over £20,000, it’s good value too.

Camping for a night or two was the plan for the Bank
Holiday weekend. Never a fan of life under canvas, a Ford Nugget Camper was to be my billet for a couple of nights in the Dales. Sadly, the pricy camper (circa £70,000 with options) had a faulty leisure battery which meant that nothing worked. I had to content myself with a couple of days out, using the commodious interior as a picnic spot. 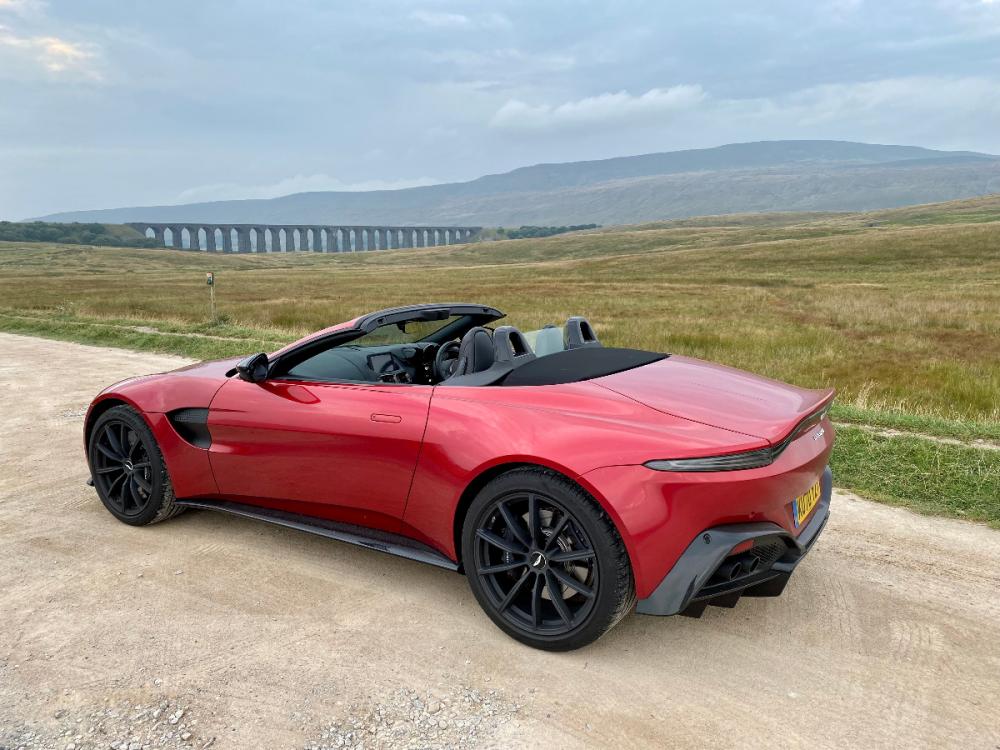 I began the month channelling my inner Bond with one of Aston Martin’s finest. I am not sure JB would drive a red Vantage Volante, as top-down motoring might see him arrive at journey’s end a little shaken and most definitely stirred.

I on the other hand, had an absolute ball, covering around 400 or so miles during the few days the car was in my capable hands. Exceptionally fast, with a gorgeous soundtrack from the powerful twin-turbo V8, all my miles were covered with the roof stowed. Would any car have attracted more attention? Doubtful, and returning to the car usually meant a chat with enthusiasts who had gathered around for a closer look. I don’t blame them.

All too soon the car was on it way back to its maker, though sadly with a slight graze where the delivery driver caught my gatepost as he arrived chez moi. I suspect he wasn’t very popular… 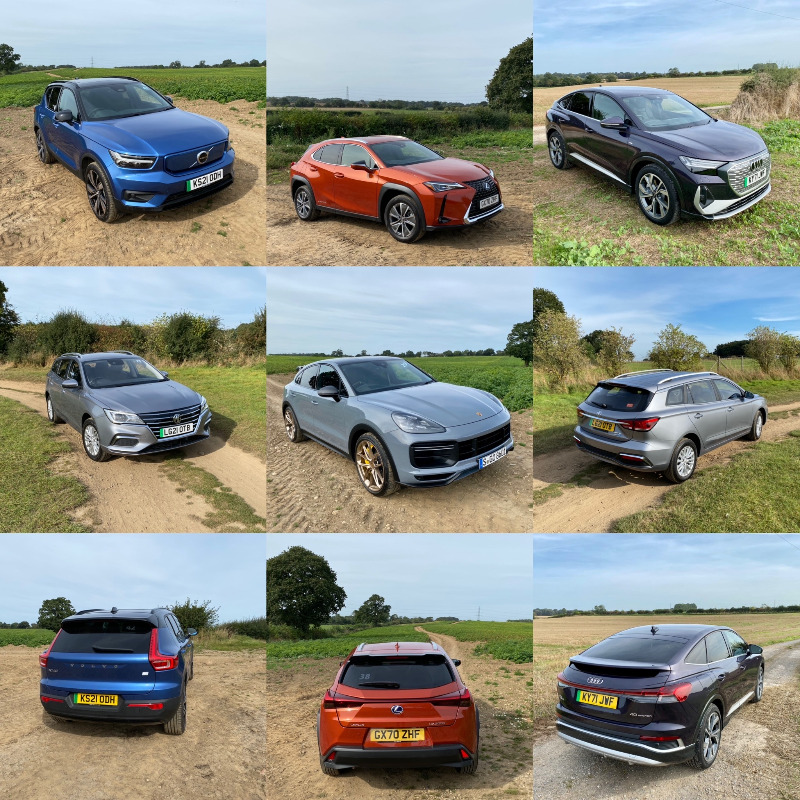 ‘Lots driven at SMMT Test Day North’
More British built loveliness followed, with two plug-in hybrids from Land Rover. The Discovery Sport and Range Rover were as accomplished as ever, even though the latter was about to be replaced. Reassuringly expensive and well equipped, two enjoyable weeks behind the wheel were had.

My only event was the SMMT North Test Day, held as usual at Wetherby Racecourse. As per the Millbrook event, another chance to catch up with industry friends and drive cars. A perfect day out in my book.

The Northern Group of Motoring Writers used the occasion to announce our Car of the Year, the award going to the Toyota GR Yaris. It certainly got my vote. The Toyota PRs were genuinely delighted to be presented with our traditional inscribed miners’ lamp and a bottle of fizz.

Last, but by no means least, was a week spent with the new electric version of Fiat’s diminutive 500. A surprisingly fun car in which to tackle my favourite local test routes, the only downside as far as I was concerned was the car’s rather lurid pale gold paintwork. It met with some appreciation, from dare I say it, the fairer sex.

The ideal urban runabout, with a decent range of up to 199 miles, there was much to praise.