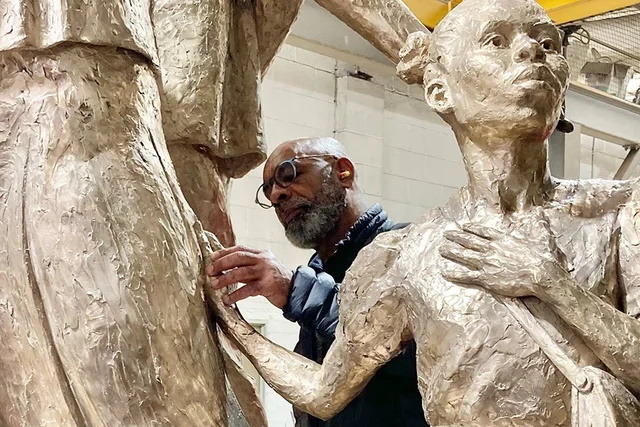 Members of the Windrush generation joined HRH Duke and Duchess of Cambridge at London Waterloo Station today (22 June 2022) to witness the unveiling of the National Windrush Monument.

Designed by renowned Jamaican artist Basil Watson and delivered with £1m funding from the Department for Levelling Up, Housing and Communities, the Monument symbolises the courage, commitment and resilience of the thousands of men, women and children who travelled to the UK to start new lives from 1948 to 1971.

The three figures – a man, woman, and child – dressed in their “Sunday best” are climbing a mountain of suitcases together, demonstrating the inseparable bond of the Windrush pioneers and their descendants, and the hopes and aspirations of their generation as they arrive to start new lives in the UK.


The Windrush generation has come to be defined as those people who emigrated from the Caribbean to Britain between the arrival of the MV Empire Windrush on 22 June 1948 and the Immigration Act 1971.

Following public engagement in 2021, in which Basil Watson’s design resonated the most, he was commissioned to create the Monument by the Windrush Commemoration Committee (WCC), chaired by Baroness Floella Benjamin DBE DL. Basil worked collaboratively with a team at Pangolin Editions in Stroud, Gloucester to complete the monument.

The Monument’s location, London Waterloo station, was chosen due to its significance in the Windrush story as thousands of people who arrived from the Caribbean passed through the station on their way to start their new lives across the country.

The Monument was delivered by the Department for Levelling Up, Housing and Communities with the support of the Windrush Commemoration Committee, and UP Projects.

Thirty Five different projects across England are also celebrating the day providing community events and activities funded by share of £500,000 from the Windrush Day Grant Scheme.

2022 is the fourth annual National Windrush Day and this year’s projects will focus on bringing communities together – across different ages and ethnic backgrounds – to commemorate, celebrate and educate their local area about the contribution of the Windrush generation and their descendants across the country.


Chair of the Windrush Commemoration Committee Baroness Floella Benjamin DBE DL said:
“The National Windrush Monument will be a permanent place of reflection, celebration and inspiration for Caribbean communities and the wider public, especially children.

“It will act as a symbolic link to our past and a permanent reminder of our shared history and heritage for generations to come. I hope it will be a catalyst for other monuments across Britain commemorating the extraordinary contribution to this country by the Windrush generation.

“I am grateful to the members of the Windrush Commemoration Committee for their boundless dedication to ensuring this monument comes to fruition, and hope the Caribbean communities who we have sought to serve, believe that we have done them justice.”

For more information on the about the Windrush story and the memorial please visit a new website which will go live on 22 June.