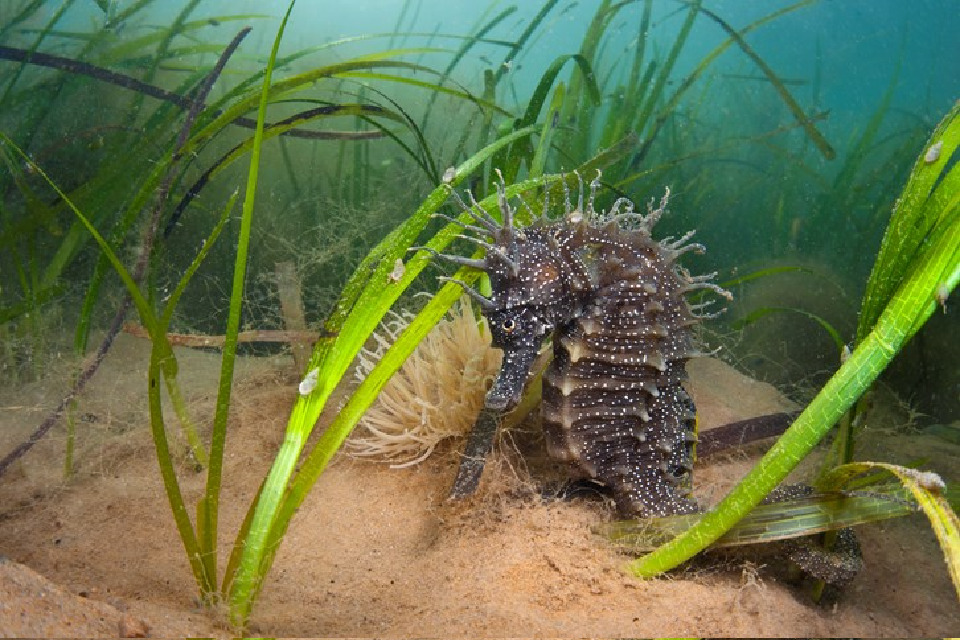 The LIFE Recreation ReMEDIES project, led by Natural England, will protect seagrass meadows - a critically endangered EU red listed habitat which are easily damaged and slow to recover. They are threatened by anchoring, mooring and launching of recreational boats, as well as trampling from walkers and bait collectors. The project will provide environmentally friendly moorings, voluntary codes, targeted training and habitat restoration, in five areas across southern England.

Seagrass meadows stabilise the seabed, clean surrounding seawater and absorb carbon, helping to prevent climate change. It has been estimated that seagrass around our shores can absorb and store at least as much carbon per hectare as trees in UK woodland. These plants are havens for many marine animals including rare seahorses, stalked jellyfish, and rare seaweeds. These habitats are also perfect for fish nurseries, including commercially valuable flatfish such as plaice and flounder.

"We want to make sure that everyone can enjoy England’s rich coastal landscapes, and this £2.5 million funding boost will help protect and restore critically endangered species and habitats as well as tackling climate change.

"This project is a win-win-win for the planet, for people who use the sea and for the marine environment by protecting the delicate sea bed and restoring sea grass meadow, a vital carbon sink, as well as providing new places for boats to moor."

The scheme has been awarded £1.5 million from the EU’s LIFE fund and is the result of more than 12 months of working together with several partner organisations including the Ocean Conservation Trust, Marine Conservation Society, Royal Yachting Association and Plymouth City Council. The other £1 million has been match funded from Natural England and the other partner organisations.

The project, running from July 2019 to October 2023, will be publicly launched at a project workshop at the National Marine Aquarium in Plymouth tomorrow (30 January) looking at Advanced Mooring Systems that are more gentle on delicate underwater habitats, building on previous wildlife friendly mooring workshops run by the Royal Yachting Association.

The techniques and evidence drawn from Recreation ReMEDIES will be evaluated to measure the conservation benefit and assess how it could be repeated across Europe.

The programme will directly train nearly 2,000 recreational users, helping to:

collect seed and replant seagrass (a first for England at this scale);
inspire better care of the seagrass beds by recreational boat users;
roll-out solutions including advanced mooring systems that are more gentle on delicate underwater habitats.

"We are pleased to have the chance to show recreational boating and sensitive habitats coexisting. ReMEDIES is a great opportunity to exhibit Advanced Mooring Systems to recreational users."

"Seagrass beds are massive carbon sinks, but have been severely reduced in English waters since the industrial revolution.

"If - through this project - we are able to create new beds, and enhance existing ones, it will be of a huge benefit to fish and invertebrates. It will help secure and grow a habitat that is proven to absorb massive amounts of CO2."

"We’re delighted to be a part of this vitally important project to protect and restore seagrass habitats across the UK.

"Seagrass meadows are amongst the most productive marine habitats in the U.K and offer a wide range of benefits to the coastal communities that live near them. With seagrasses in decline worldwide we’re very excited to apply innovative techniques to seagrass ecosystem restoration to replace some of the lost benefits we see with decline of the habitat."

Natural England is the government’s adviser for the natural environment in England, helping to protect England’s nature and landscapes for people to enjoy and for the services they provide.