New Footbridge Touches Down In Wigan

The moment a new footbridge touched down over a busy motorway junction near Wigan has been revealed in new timelapse footage.

Highways England’s contractors worked through the night last month to install the new 30-metre-long bridge over the A577 slip road at Orrell Interchange, where the M6 connects to the M58.


Timelapse footage shows the new footbridge being installed at Orrell Interchange.
The footbridge was brought onto the site on the back of a truck and lifted into place using a crane.


Contractors worked through the night to install the footbridge.
YouTube footage showing the lift is available here: 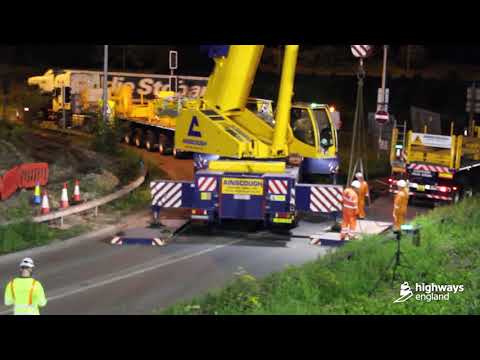 The new footbridge will reconnect communities in Pemberton and Orrell.
A previous bridge at the same location, which links Pemberton to the east of the M6 with Orrell to the west, had to be removed after it was struck by a lorry.

The new footbridge, which is due to open to the public later this month, has a higher barrier on both sides, making it suitable for cyclists. A new ramp will also provide step-free access over the slip road for people with prams and wheelchairs.

“The new footbridge is now firmly in place and we’re on schedule to open it later this month once we’ve completed work to the paths on either side.

“The new bridge will reconnect communities in Orrell and Pemberton, so residents will no longer have to go the long way round to visit friends and family, or get to the shops or park.”

Temporary narrow lanes and a 30mph speed limit will remain in place on the A577 slip road for the safety of drivers and road workers until the footbridge opens. Highways England’s contractors are following strict safeguarding measures to prevent the spread of Covid-19.

More details on the scheme are available at: https://highwaysengland.co.uk/regions/north-west