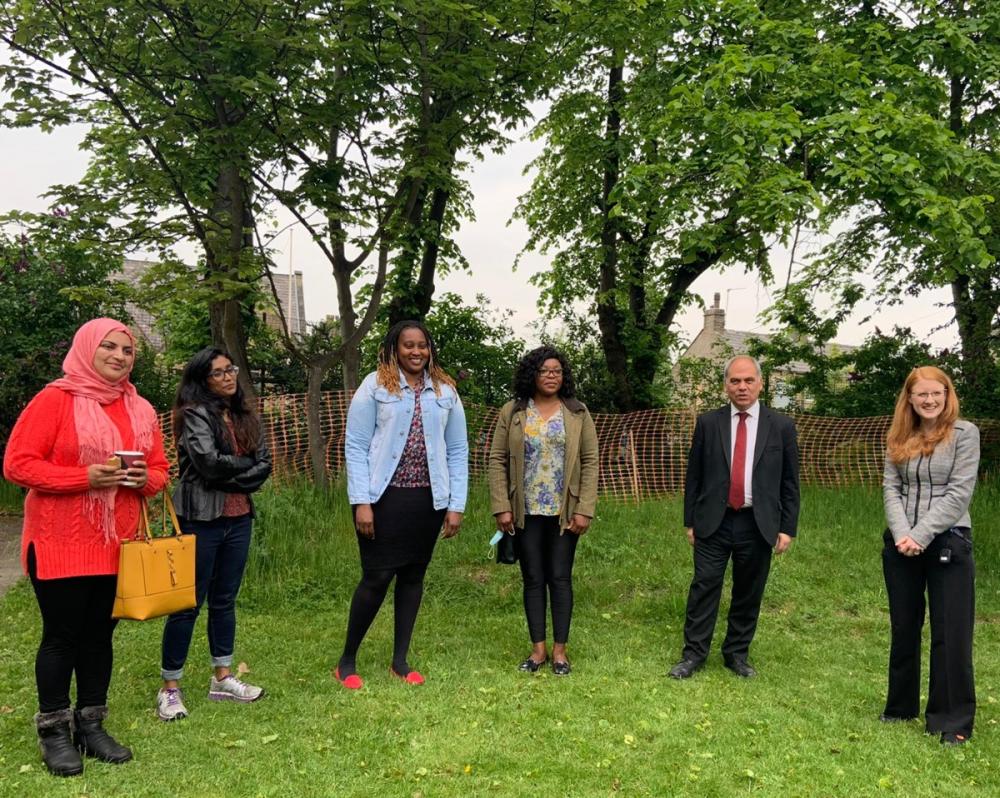 Bambos and Holly came together with members of the St Augustine’s community and partner organisation Sisters United to share people’s experiences of the asylum system and discuss ways in which we can campaign to make it better.

Sara Robinson, Centre Director of St Augustine’s said: “It was a powerful discussion that shone a light on moving and often unheard human stories. We heard about the failures of a creaking and inhumane immigration process, which all too often causes people who have fled war and persecution further, unnecessary pain. We cannot underestimate the detrimental impact this is having on people’s health and wellbeing. This is not the kind of approach the Britain I know and love would usually take.”

“We are really proud to offer a warm welcome and safe space to people seeking support and sanctuary here at St Augustine’s Centre. We work across our local community and beyond, sharing stories of integration, cohesion and community. Our centre members bring multiple skills, resources, life experiences and a huge will to helps others locally. By working with local organisations, schools and groups, this cohesive approach to community that recognises people for their contributions to society is something British people have historically always done and is something we should be very proud of.”

Bambos Charalambous, MP for Enfield Southgate and Shadow Immigration Minister, said: “I was so pleased to visit St Augustine’s Centre, which does incredible grassroots work, and hear people’s lived experience of the asylum system. I was very concerned to hear about unnecessary delays and bureaucracy in the asylum system. There is great need for reform, and I will be doing what I can to campaign against the government’s flawed new plan for immigration and make sure the system is fair and humane.”

“It is legal to seek asylum. It is the foundation of human dignity to live in peace and we are all stronger for knowing and listening to each other’s stories.”

An asylum seeker centre member of St Augustine’s who attended the meeting said: “the only thing I ever wanted from the UK was to be safe and treated fairly. These values of humanity, safety and compassion are what brought me to the UK, and I want more than anything to contribute to the country that I care for so much.”

Particularly during the pandemic, St Augustine’s has seen many members of its community step up to support each other and their local communities – volunteering with local charities or health organisations and contributing to the effort to keep people safe and combat the virus.

A spokesperson from St Augustine’s said: “instead of making life more difficult and the system more stuck, we could save taxpayer’s money by creating an asylum system we can be proud of – with an efficient process that examines each (person’s) case fairly. A patriotic system in line with traditional British principles of solidarity and compassion, that treats people with dignity and provides them with the support they need to rebuild their lives. Too often, the government chooses to detain or deny rights to those seeking safety or rebuilding their lives.”

“Priti Patel’s ‘New Plan’ for Immigration conflates two completely separate issues: immigration and asylum. Asylum is a humanitarian obligation accounting for only 6% of total immigration. The government’s proposals undermine the ability of refugees to claim asylum if they “entered the UK illegally”, but most people seeking sanctuary or fleeing persecution have no other option. Criminalising asylum seekers, as the government are setting out to do, is wrong, breaches international refugee convention and will worsen the refugee crisis.”

“Migrants make a significant contribution to our economy and bring important skills as doctors and nurses in our NHS, public services and wider society.”

Holly Lynch, MP for Halifax, said: “I am so proud to have St Augustine’s Centre in my constituency and I greatly value and support their work. The community focused activities they do really shines a light on the positive stories of integration and cohesion we always have and need more of in the UK.”

“It was a real privilege to hear first-hand accounts of some people’s shocking experiences of the asylum process and I will always do what I can to support individuals and lobby government for the changes we need to improve the system and make it more humane.”

As we approach refugee week (14-18 June), St Augustine’s will be campaigning locally and nationally to celebrate our refugee community and the contribution they make to the UK. This year’s theme is ‘We Cannot Walk Alone’, which is an invitation to extend your hand to someone new, who is outside your current circle, has had an experience you haven’t, or is fighting for a cause you aren’t yet involved in. Now, more than ever, at a time when communities around the UK have come together in the face of a global pandemic, we hope people can stand proudly together with us.