Next Steps To Tackle Plastic Waste

The war on plastic waste is set to be ramped up with fresh plans to stop the supply of a range of single-use plastics that threaten our natural environment. 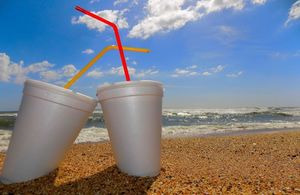 Single-use plastic plates, cutlery and polystyrene cups are among a raft of items that could be banned in England as part of a new public consultation being launched in the Autumn. These proposals will lead to businesses using more sustainable alternatives and prevent plastic litter from polluting our landscapes.

It is estimated that each person uses a staggering 18 single-use plastic plates and 37 single-use plastic items of cutlery each year in England. The durability of plastic means litter from items used for a few minutes can last for centuries in landfill or as litter in the countryside or ocean. Around the world, more than one million birds and over 100,000 sea mammals and turtles die every year from eating or getting tangled in plastic waste.

Industry is taking action to tackle plastic waste, such as through the UK Plastics Pact, a collaboration between businesses from across the entire plastics value chain, supported by the government and coordinated by the Waste and Resources Action Programme (WRAP). Pact members have identified eight problematic plastic items for elimination and are investigating further items. We want to build on both the progress being made by industry and our action on plastic waste.

The UK government has already taken major steps to tackle plastic pollution, banning microbeads in rinse-off personal care products, dramatically reducing the number of plastic bags being used and restricting the supply of single-use plastic straws, stirrers and cotton buds. These plans will build on the success of those measures and form part of the Government’s commitment to prevent all avoidable plastic waste by the end of 2042.

Environment Secretary George Eustice said:
"We’ve all seen the damage that plastic does to our environment. It is right that we put in place measures that will tackle the plastic carelessly strewn across our parks and green spaces and washed up on beaches.

"We have made progress to turn the tide on plastic, banning the supply of plastic straws, stirrers and cotton buds, while our carrier bag charge has cut sales by 95% in the main supermarkets.

"Now we are looking to go a step further as we build back greener. These plans will help us stamp out the unnecessary use of plastics that wreak havoc with our natural environment."

Jo Morley, Head of Campaigns at City to Sea, said:
"We welcome the news that the government are taking steps to tackle some of the most polluting single-use items. This is a much-needed move, that we as campaigners have been calling for, along with thousands of our supporters and members of the public.

"We need now to take a leading role in banning unnecessary single-use plastics to see real benefits for the nation’s and the world’s wildlife."

Further details of the consultation, including the full list of single-use items under review, will be announced in the upcoming weeks.

The UK is a global leader in combatting plastic waste. Following the huge success of the 5p charge on single-use carrier bags, which cut sales in the main supermarkets by 95% since 2015, we increased the minimum charge to 10p and extended it to all retailers, ensuring we can take billions more bags out of circulation.


The government's landmark Environment Bill will give a raft of new powers to step-up the war against plastic pollution and litter, including:

Introducing a Deposit Return Scheme for drinks containers to recycle billions more plastic bottles and stop them being landfilled, incinerated, or littered. Through a small deposit placed on drinks products, the DRS will incentivise people to recycle;
The Extended Producer Responsibility scheme will mean companies will be expected to cover the full cost of recycling and disposing of their packaging. Producers of commonly littered packaging will be made more responsible for their littered packaging, with fees paid to cover the cost of cleaning up and for litter prevention activities; and
The plans for Consistent Recycling Collections for every household and business in England will ensure more plastic is recycled.

The government will also introduce a world-leading plastic packaging tax from April 2022, set at £200 per tonne, on plastic packaging which doesn’t meet a minimum threshold of at least 30% recycled content. This will encourage greater use of recycled plastic, leading to increased levels of recycling and plastic waste collection, helping to tackle the problem of plastic waste and protect our environment.