In the latest instalment of its year-long campaign to encourage more people to ‘Drink Cask Beer’, Black Sheep Brewery has enlisted the help of comedian Maisie Adam, to dispel some of the common misconceptions that surround cask beer, and tackle the cask trolls, head on!

With numerous comedy shows under her belt, such as Mock the Week, Have I Got News for You, and 8 Out of 10 Cats, the Masham brewery has partnered with fellow Yorkshire comedian Maisie to create a “Mean Tweets” video, reading some of the negative, false and downright hurtful things that people have said about cask beer online – before Maisie retorts in her usual, blunt style to explain exactly why they’re so wrong. 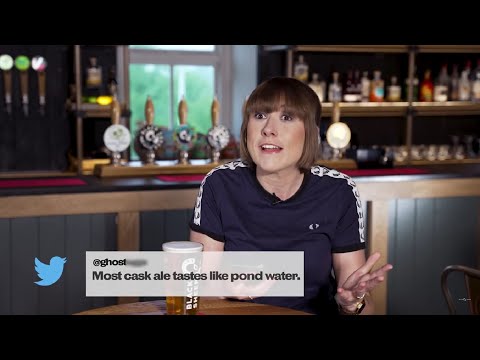 Despite being the ‘original craft beer’ – rich in flavour, variety and heritage – cask beer has experienced a steady decline for several years due to changing consumer habits, the growth of other drinks categories, and repeated pub closures during lockdown.

However, the Masham-based brewery is on a mission to change this, with the brewery launching its high profile ‘Drink Cask Beer’ campaign in February this year.

Since the launch, the brewery has worked with spoken word artist, Matt Abbott, to commission a bold, powerful poem detailing the history, tradition, and relevance of cask ale for all. Abbott’s poem was then performed in a thought-provoking video production, featuring Bradford actress, Chantelle Pierre.

The brewery also recently created a pop-up pub The Breathe Inn, beneath Yorkshire’s iconic Ribblehead Viaduct, serving only its new carbon-neutral cask beer, Respire, to offer hikers a moment of respite as they take on one of Yorkshire’s famous three-peaks routes.

The brewery’s latest partnership with Maisie is the most recent edition to its ongoing campaign – with more big, bold perception-changing initiatives to come in the future.


Charlene Lyons, Chief Executive at Black Sheep Brewery, said: “Over the years, cask beer has found itself unfairly categorised as a drink for the older generation – and one for men in particular. But this quite simply isn’t true!

“We believe the cask category needs genuinely disruptive campaigns like ‘Drink Cask Beer’ to help the category back into growth. We’re so passionate about cask and we’re keen to lead the movement and reposition it with new and lapsed drinkers.

“There’s so much variety in cask beer now that it really is a drink for everyone, and we were keen to tackle the ‘haters’ head on, but in a fun way. And we felt Maisie was the perfect partner to help us do this – she’s an amazing comedian, down-to-earth and best of all – from Yorkshire!

“It was an absolute joy - and a great laugh - to welcome Maisie to the brewery to fight back at some of cask beer’s biggest online trolls. In Maisie’s own words – “look, just drink cask beer! It’ll change your life”.