Of Mice And Men By John Steinbeck 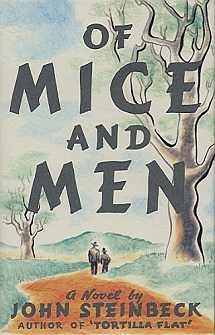 Of Mice and Men first edition
In their wisdom, the powers-that-be decided to change the choice of books which could be studied for English Literature at GCSE level, for 2015 and beyond. It was an obvious decision given the title of the course since they banned all literature which wasn’t of English origin – it made sense. What happened, however, was that it wiped out certain stalwarts which English teachers had relied on for years, such as Steinbeck’s Of Mice and Men (1937). The film version, made in 1992, starred Gary Sinise (perhaps better known for his TV role in CSI) – who also directed it - as George, and John Malkovich as Lennie. Inimitable and sympathetic performances brought the two characters to life.

What of the book though? I would recommend it to anyone to read. It is not simply a dry school text but a worthy document of social history, sympathetic to the characters and their predicaments, thought-provoking in subject matter and as relevant today as when it was written.

Set in America, in the Great Depression of the mid-thirties, Of Mice and Men tells the story of George and Lennie, two itinerant ranch hands. Their relationship borders on that of parent and child since George has long shouldered the responsibility of looking after the giant-with-the-mind-of-a-child, Lennie. Lennie is unaware of his strength and is unable to control it; the violence, which increases as the book progresses, is evident from the start - with the death of a mouse. The narrative traces events over just one weekend, from Thursday evening to Sunday afternoon. 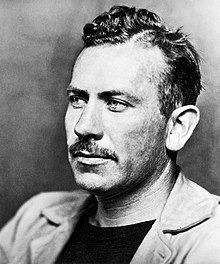 John Steinbeck
Characters are clearly delineated. There are not many of them. Slim, the skilled foreman is respected by all as ‘the Prince of the ranch’; he is fair and tolerant, while Curley, the Boss’ son, is like a coiled spring, full of aggression and the need to prove himself. Carlson lacks subtlety and fails to understand what is happening in front of him, while Candy is old and waiting to be ‘canned’ - Steinbeck’s aptronyms are not subtle.

Steinbeck, of course, had a message or in this case, several messages. A native Californian who had experience of working on ranches, he was struck by the contrast between the surrounding natural beauty and the misery and hardship faced by the people who had to live and work there.

In this novella, he reflects on and criticises the treatment of women at that time. The only female character we meet is Curley’s wife – who isn’t even given a name. Steinbeck is critical of the racial intolerance – his use of language, whilst offensive to a contemporary reader, was typical of the era and highlights the abuse suffered by negroes in the southern states at that time. He demonstrates, also, the lack of understanding of disability and the lack of compassion for the elderly. There is no blatant reprimand; the book is written in such a way as to evoke sympathy for the childlike Lennie, the aged Candy, the disabled negro Crooks (so-called because he has a crooked back, the result of being kicked by a horse - a subtle way of suggesting that even animals were further up the social hierarchy in those days) and even ultimately, Curley’s wife.


Also by Artis-Ann ...
'You'd Better Get Yourself Off Then, Pet': The Seagull By Ann CleevesThe Bonds That Define Us: And The Mountains Echoed By Khaled HosseiniReview: Beast By Chris SpeckReview: The Girl From The Hermitage By Molly GartlandReview: The Guardians By John Christopher
George and Lennie’s dream is described repeatedly; a mantra to calm Lennie and something for both to cling to. It is Steinbeck’s comment on the American Dream and I leave it to you to decide whether there is any optimism at the end of this book.

It’s a novella which can be read in one sitting and I defy you not to feel something when George’s hand shakes as he holds the gun shortly before the end and demonstrates true friendship.

Of Mice and Men was first published by Covici Friede and later by Penguin.