Strip the Prime Minister’s utterances of the verbal formulations and tricks, the phoney politenesses - the honourable membering, the if I may say so-ing, the with all due respecting – and what have you got? Not that much when it’s all boiled down to actual meaningful content, even when he’s trying to make a point rather than avoid answering a question.

Imagine if all he spouted were delivered in one of those accents commonly associated with dullness, the parochial or stupid instead of one synonymous with the patrician class, intelligence and natural leadership. I assume he would not be leader of the Tory Party. 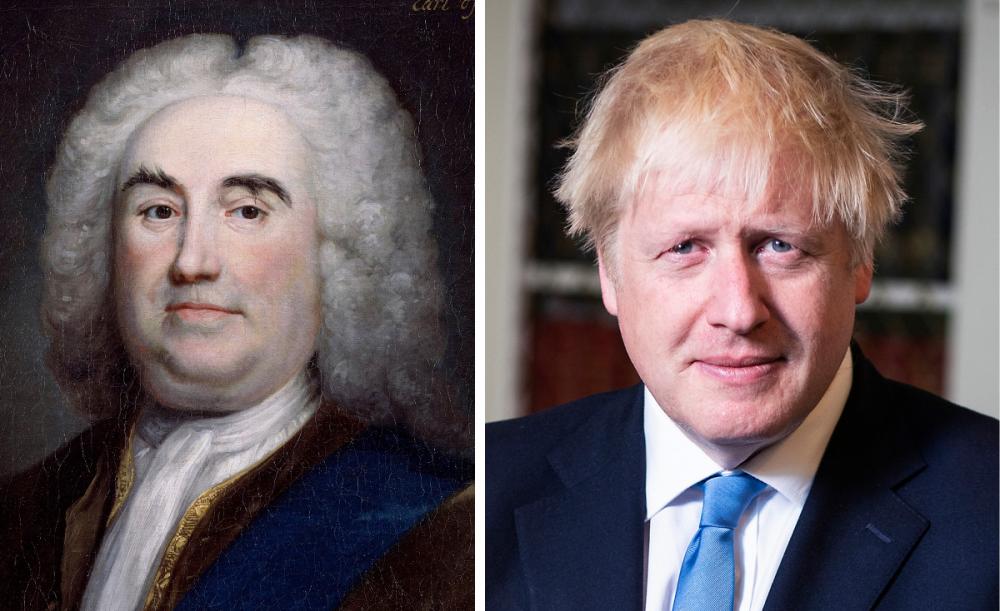 Walpole and Johnson. The old school haircut has barely changed
For reasons entirely to do with indoctrination and inherited perceptions, Boris Johnson’s accent and the way he delivers his words seem to many people’s ears to freight them with more weight than they deserve. Even the halting delivery, the occasional suggestion of an aristocratic stammer, slightly reminiscent of the Queen’s father’s, George VI, are all part of the act.

It’s interesting that Johnson and people from his background rarely if ever go in for the sort of unconscious speech accommodation, as the sociolinguists call the modification of accent - which is a form of politeness to suit the company and situation. Why would they when they have been brought up to believe that theirs is Received Pronunciation, received no less from the very highest of the high, conferring for life the mark of prestige, wealth, education, automatic membership of the social elite. Interestingly. Tony Blair, the great chameleon and social climber, could never be accused of this. It was often said he was a Cockney when addressing a meeting ‘darn sarf’ and had a distinct tendency to modify nouns with ‘wee’ when north of the border (and become dewy eyed over his Fettes College days in Edinburgh). Margaret Thatcher from Lincolnshire tried to copy it and sounded like a gross parody but succeeded through sheer force of will that Bojo hasn't got.

Johnson’s particular distortion of syllable and sound, I’m guessing, is peculiar to Eton. His school chum, David Cameron, has many of the same affectations – as did another unrelated Johnson the cricket commentator, Brian, who was at Eton from 1925-31 and got a good grounding in it. After Johnson’s death, Henry Blofeld, another old boy, moved into the vacant commentary box chair as almost the perfect clone in manner and sound. Have a guess where Jacob Reece-Mogg went to school.

All of these men will say ‘ter’ instead of ‘to’, for example – and I notice that the odious Matt Hancock, born in Chester and with no connection to Eton, has recently taken up this alternative pronunciation. He might be destined to go places but for his obvious lack of ability. Still that is not an insuperable barrier as Johnson himself and most of his cabinet have proved.

When Johnson says ‘rarely’, we have to remind ourselves he actually means ‘really’. ‘Where’ is his way of saying ‘we’re’. ‘You’re’ emerges as ‘yore’. ‘Because’ is ‘becuz’. It’s ‘terday’ and ‘termorrow’ but, bizarrely, ‘yestoday’.

Now, personally, I love the rich diversity of regional accents and my party piece used to be to guess a stranger’s geographic origins. I rejoice in the memory of asking a lady many years ago if she came from Dudley, one of the easiest accents to get. ‘Yis,’ she said in amazement, ‘but how did yow now? Oi deedn’t theenk Oi’d got an akzent at awl.’

I’ve stopped embarrassing myself trying to do this as my hearing is not as distinct as it was and neither in many cases are accents. I have no possible objection to the way anybody forms their vowels or stretches their intonation – although I admit some urban accents do grate. What I strongly object to, however, is the assumption that any one accent is of its nature better than any other.

As long as it’s recognised that what Johnson speaks is actually nothing more than a dialect belonging to a certain narrow class of people then I can accept it for what it is. The problem is that those who possess it often seem to have a distinct tendency to project both their voice and their ego. They seem to naturally assume superiority. Perhaps this is not surprising given that since Robert Walpole, the first, there have been a score of British prime ministers, including six in the last century and two in this, who went to this most elite of educational establishments. 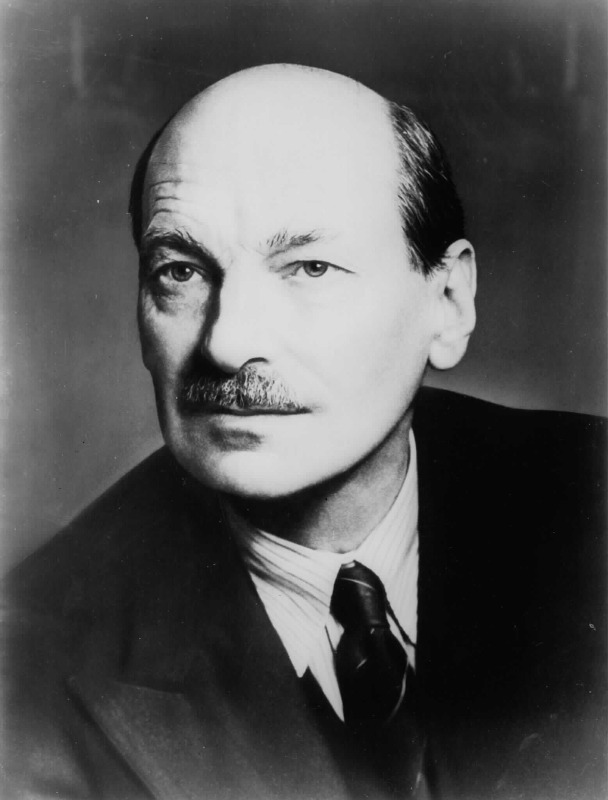 Clem Atlee. Not an Old Etonian
Strangely of those comparatively recent politicians I most admire among those who attained the highest office, Lloyd George, Clem Atlee, Harold Wilson, James Callaghan and, lest this looks like a political bias, let me add Edward Heath and John Major as worthy in some ways – none are old Etonians.

Irrational though it may be whenever I hear that voice of authority, that particular peculiar stentorian patrician baritone, I am guaranteed in principle, consciously and unconsciously, to resist anything it is telling me to do. My hackles rise immediately.

I appreciate as much as anybody that it’s very difficult to escape from being unduly influenced rather more by the form of delivery than the actual content. Some years ago I was part of a panel involved with selection of ‘exemplar material’, as the educational jargon had it, looking to establish a bank of filmed evidence of what constituted particular grades in the GCSE English Language oral examinations – for use by teachers and examiners as touchstones for assessment.

I remember harbouring the suspicion that one guileless boy with a strong Barnsley accent was more worthy of a higher grade than a very well-spoken girl who in the course of her five-minute presentation had managed to slip in a couple of references to her father being an Oxford professor. After much discussion, it was eventually agreed that in actual pithy content the boy had delivered far more and his meaning was clear and unambiguous.


Also by Andrew Liddle...
Doors Opening For The Georgian Theatre RoyalAnd Then There Were TwoMeet Magic Rock's Christa SandquistSunak Is A Bit Of A DragRadio Gaga
Strip away the accent, the verbal camouflage, the empty rhetoric, the knowledge of the latest buzz words, the classical references, the ability to name drop and, above all, the sense of entitlement that rings bright and it becomes clear that Johnson is by no means the most articulate of individuals. Neither, of course, was Michael Foot, leader of the Labour Party, who had no difficulty piling one clause upon another but could never climax an actual sentence - and here, I suppose, we are straying away from accent to other aspects of linguistics.

Some of the best phonetically-pure and resounding English I recall hearing was in Scotland. In the course of researching my doctoral thesis on Robert Burns, I made it my business to study and record the accents of Ayrshire where the poet came from. It was my conviction and discovery that Burns was not the ‘heaven-taught ploughman’ of popular conception though certainly a genius, and what he wrote was a product of his background and time. Ayrshire folk still speak in a remarkably rich and engaging way, their language brimming over with choice phrases and happy extemporisations.

I would suggest the average man or woman in the street in auld Ayr – which the bard said ‘ne’er a town surpasses for honest men and bonnie lasses’ - is likely to be more articulate and more interesting than Alexander Boris de Pfeffel Johnson.