On The Eve By Turgenev: An Allegorical Love Story And A Plea To A Nation

Turgenev, by Ilya Repin, 1874
“To see a World in a Grain of Sand”, the opening line of William Blake’s Auguries of Innocence (1803) - one of his “prophetic works” - could be a useful way marker when approaching Turgenev. On The Eve, published in 1860 and translated into English in 1895, may be seen as a work utilising an ostensibly sentimental, if undeniably tragic, historical love story, as a thinly veiled cypher for a profoundly insightful political protest novel. The anguished soul of a poet speaks to us through the medium of fiction. An author with a poetic soul, addressing the sickness within the soul of his nation. On The Eve is a literary gem; as flawed, multifaceted and as beautiful as it is tragic.

Turgenev’s genius was to observe everything and convey all with brevity and ease. His “Grain of Sand” was a young girl awakening to love and her immediate circle of family and friends. His “World” was the entire nation of Russia. For beneath the surface of this novel’s deceptively romantic leitmotif, lies a heartfelt, but deeply lugubrious pronouncement upon Russian society on the eve of reform. An anti-establishment protest sits like an iron fist within the literary glove of his lyrical prose and sublime characterisation. Literary innovation, paeanistic celebration of landscape, and an exquisite attention to detail populate an allegorical tale which raises an historical romance to the heights of a humanistic, if tainted masterpiece.

So, I’ve extolled the novel’s virtues and suggested a thematic potency more likely to be recognised within the hallowed pages of works penned by Russian authors of infinitely higher repute than Turgenev (1818-1883). I’m not alone in finding the book to possess masked depths. Edward Garnett, in his foreword to the novel’s 1895 translation, wrote, “the clear waters of a pool conceal its surprising depth”. Garnett who later assiduously edited D.H. Lawrence’s Sons and Lovers (1913) in order to appease prudish censors, was a literary critic of great perspicacity. He recognised, in On The Eve, a book cloaking its real message in “the simplest and most consummate art”.

In addition to passing up the chance to publish Joyce’s A Portrait of The Artist As a Young Man (1916), perhaps another of Garnett’s less significant critical errors was to conclude that Turgenev avoided allegory as a literary device. He rightly concluded that, “Turgenev was a psychologist not merely of men, but of nations” and that, “as a politician he foretold nearly all that actually came to pass”. Whilst I agree with much of what Garnett has to say about, On The Eve, he’s perhaps guilty of inferring an authorial intent, without appreciating how he’d been made to see it! Bold stuff to assert from a literary nobody like me, however intimidation by repute can’t silence this Raznochinets armchair critic.

For me, applying an allegorical interpretation to this particular literary “pool”, creates an anagnorisis-like awakening to both its power and its truth. Turgenev, presents us with a romantic fable, albeit realistically hewn from exquisitely rendered characterisation, about two unlikely lovers, and simultaneously reveals an entire nation’s character and its tormented soul. As Moissaye Olgin (1874-1939) tells us in his The Soul of The Russian Revolution (1920), Turgenev and his contemporaries were, “children of their times”, willing to “scrutinise the economic, the social and the political life of their country”. Turgenev did not utilise an allegorical model merely for its inherent literary power. Other factors were at play. 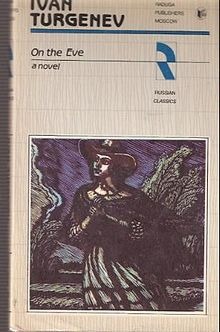 Reading this novel through the prism of an allegorical love story may have been Turgenev’s authorial intention, reflecting a bold creative choice and a circumspect political strategy. You will of course want me to support my interpretative proposition and give it a modicum of credence. Literary nobodies don’t get by on reputation alone!

Olgin tells us in his scholarly, A Guide To Russian Literature 1820-1917 (1920) that Russian literature of Turgenev’s epoch was the product of the nobility. Pushkin, Lermontov, Gontcharov and Tolstoy all wrote about life regarded from their privileged vantage points. However, the ruling autocracy maintained a climate of ruthless ideological censorship. Turgenev had even been exiled to his own estate for writing a piece in response to Nikolai Gogol’s (1809-1852) death. This outpouring had ruffled the feathers of a ruling establishment prone to paroxysms of anaphylactic shock when criticised.

Olgin informs us that Literature became, “a means of keeping the mind and the soul awake to the important problems of existence”. However, speaking overt truth to power was dangerous. In 1856, Turgenev left Russia for good and based himself in Paris. He did eventually return to his beloved homeland, but by then he was safe within his coffin.

So, Turgenev observed a nation somnambulistically walking towards catastrophe. A people whose soul was riddled with spiritual lassitude. On The Eve was his response. Indeed, all six of the novels he wrote between 1830-1870 address these issues, albeit ever more urgently. With the Crimean War looming as the Ottoman Empire began to atrophy, Turgenev used On The Eve to portray his nation as one harried by malevolent external forces and suffering from internal oppression. A message unlikely to delight the Tsar and his antediluvian cronies. Recalcitrant progressive urgings were an anathema to be crushed. Nothing was allowed to damage the nation’s status quo, especially something as powerful as progressive ideas.

Turgenev’s utilisation of an allegorical method seems to me to have been an act of creative genius and also rather prudent !

Anna Yelena, Elena and her doomed love for a Bulgarian revolutionary in the form of Dimitri Nikarovitch Insarov, plays out the very themes we’ve just explored. Her romantic passion cannot be catalysed by any of the Russian suitors she meets, for they are not made of the stuff of heroes. Echoing Lermontov, the flippant and cynical artist Pavel Shubin laments the utter absence of such men from Russian society. Andrei Bersenyev, his friend and another member of the privileged bourgeoisie is not a man of action, but an intermediary too pusillanimous and weak-hearted to capture Elena’s heart, or change his nation’s destiny.

Elena’s family are superfluous to Russia’s pressing needs, mired in lethargy and unable to authentically respond to life and its callings. Insarov is a proxy hero, a foreigner devoutly committed to the independence of his nation and his principles. He is virtuously motivated, not by self-centred abstract ideologies, but by love. The love of country. Cometh the hour, cometh the man…Turgenev could find no Russian worthy of the call and placed the burden upon the wide shoulders of a taciturn and charmless Bulgarian student. Insarov is spoken of as a hero, though he serves as a contrived facsimile for one. 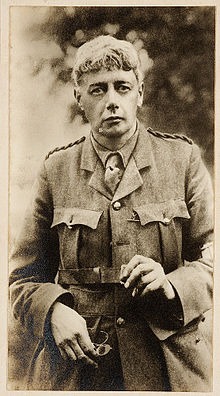 Edward Garnett
The Romeo and Juliet echo of Elena and Insarov’s doomed love powerfully reflects a nation’s fate. Turgenev drove his message home by rendering Elena with great authorial skill. Seen through no less than six pairs of eyes and her revelatory personal diary, we are given a profound psychological insight into her emotional life and mental hinterland. Her very being is revealed. In giving us Elena and her interaction with minor characters almost as stunningly realised, Turgenev allows us to both see and feel the soul of Russia. Her fate is Russia’s fate.

Turgenev has us enraptured by his allegorical love story. His denouement requires a crescendo of heightened emotional force. Just as Verdi exploited Violetta’s emotional and psychological tumult to devastating effect, Turgenev harnesses the dramatic force of La Traviata, first performed at La Fenice in Venice in 1853. Insarov echoes Violetta’s destruction, as does his own consumptive cough as she sings, “Gran Dio !...morir si giovane”. Insarov squeezes his bride’s hand, but it is too late. Elena, as Alfredo, will have to go on without love to face the future.

Pechorin’s antithesis could only be found in a foreign rebel and his flame would be snuffed out, leaving only darkness. Elena’s dreams are like those of generations of young Russians, destroyed by forces beyond her control. Turgenev found a way to not only invest his allegory with sublimely well-drawn characters, he loaded it with European pathos to further deepen its ideological and visceral tragedy.

Insarov may be regarded as the book’s Achilles Heel, for he is a clothes horse of a hero. The clockwork embodiment of qualities Turgenev yearned to find in a true Russian. He is, for me, a pale facsimile of such a man. Turgenev would recognise this himself towards the end of his life. Perhaps Turgenev had given all his poetic power to Elena and considered Insarov unworthy of his passion. Insarov’s contrived Being is perhaps a forgivable deus ex machina on the part of an author, unable to find a satisfactory Russian model for his novel’s hero.


Also by Paul Spalding-Mulcock...
‘Why Endure My Own Dehumanization?’: Assembly By Natasha Brown'Hurt People, Hurt People...': An Ordinary Wonder By Buki PapillonAmericana Meets Aesopica : Fox 8 By George SaundersGothic MusingsInterview With Victoria Princewill
Another altogether more minor flaw lies in the almost farcical construction of Elena’s father, Nikolai Stahov with his pigeon-French, who is more a caricature than a fully realised character. That said, both of these flaws may be forgiven by a generous reader, for they do not diminish the novel’s narrative integrity, or its emotional resonance.

A story derived from a notebook given to Turgenev by his friend Vassili Karatyev before he left to die in the Crimean War, became the basis of a small book with the allegorical potency of a Greek myth. On The Eve is a work of astonishing authorial brilliance. A minatory tour-de-force and a lovelorn indictment of a spiritually inert nation, languidly awakening from slumber, to the full consciousness of its power. It is as prophetic as it is disheartening, with its final image of Uvar Ivanovich Stahov waggling his “fingers” as he “gazed cryptically into the distance”.

Allegory or otherwise, it came from Russia with love. For me, this flawed literary gem will always sparkle, despite its flaws.