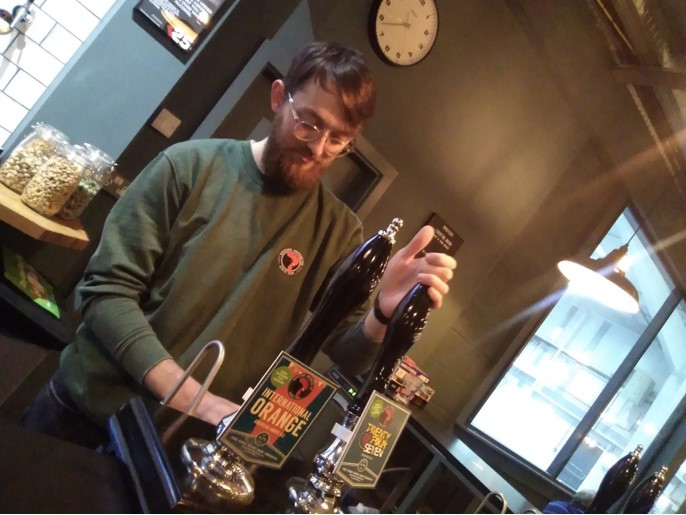 My partner has always wanted to attend a gala opening of some sort. It won’t matter what; it could be a book launch, the opening night of a show or a film premiere. Naturally, he was the first person I thought of when I spotted news that local craft brewery Rooster’s was moving premises and opening a taproom on site. We were lucky enough to be among the first customers to enjoy a drink in the taproom when it opened last week.

Roosters has been a North Yorkshire institution for over 25 years, brewing New World style pale ales first in Harrogate and then in Knaresborough. The brewery was founded in 1993 by Sean Franklin, who had previously owned Franklin’s Brewery, and his wife and son. He wanted Rooster’s to stand out from the crowd, so aimed deliberately away from the traditional English style of darker ales. A lot of American pale ales use more aromatic hops than their English counterparts, and Roosters has followed this style throughout its history, and, while it has added some darker brews to its repertoire, it has always kept the emphasis on flavour and aroma.

Shortly after moving the brewery to larger premises in Knaresborough in 2010, Sean decided it was time to retire and found the perfect buyer for his family business in Ian Fozard and his sons, Oliver & Tom. The Fozard family were already well-known in licensed hospitality in the area, having established the beer- and food-oriented pub group Market Town Taverns. While Oliver concentrates on oversight of the brewing process, Tom looks after the commercial side of the business. With three family members in brewing, I imagine family parties can be a lot of fun! 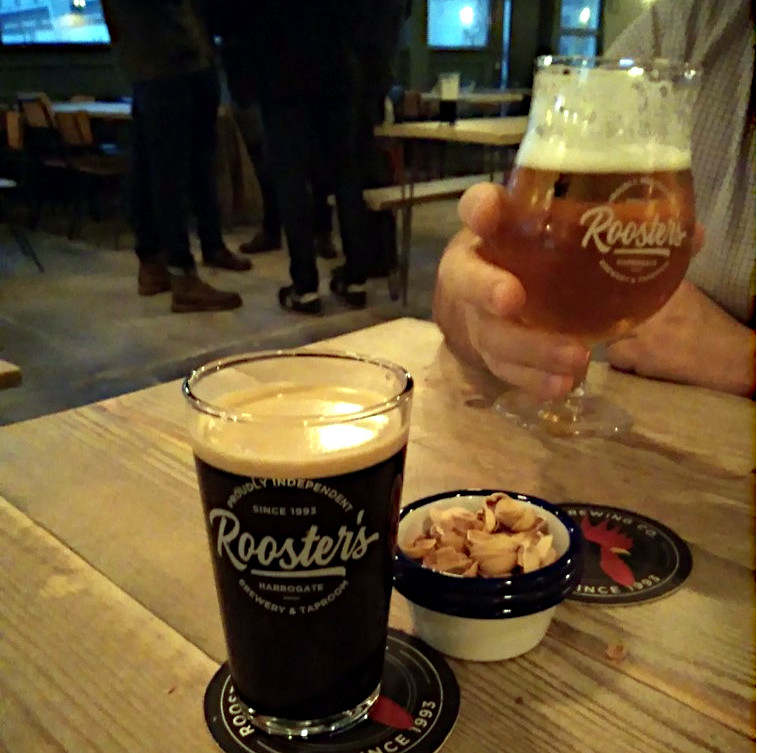 In recent years, Tom tells me, the existing premises had begun to feel a bit small. “It wasn’t that we couldn’t manage what we wanted, but it was a bit like one of those puzzles, where you always have to move one bit first to get the bit you want into place.” Finding suitable premises wasn’t going to be easy, though. Neither Knaresborough nor Harrogate have much of an industrial heritage, and they wanted to stay close to the brewery’s roots as possible. Good fortune fell their way in the shape of a unit on the Hornbeam Park commercial estate. Unit H5 came free last year, just after they enquired after a neighbouring unit. At three times the size of the Knaresborough premises, it is large enough to move the whole operation over and develop new facets to the Rooster’s identity. Tom says they’re particularly excited that the new premises afford them space to develop barrel ageing.

Innovation has been part of Rooster’s identity since the beginning, and the space at Hornbeam Park affords many opportunities. Last year, to celebrate their 25th anniversary, the brewery invited a host of other breweries to come and collaborate on a series of unique, limited edition beers. This included six breweries from the USA, with each of their brewers making the trip to Yorkshire especially. It’s obvious this innovative style is to continue. As Tom showed us the view into the brew room, where a large, stainless steel brew kit is ready to be installed, he pointed out a smaller kit in the corner – equipment ready to develop new products and limited-edition brews. Indeed, we were already being treated to a one-off brew that had been created for the occasion: a ginger flavoured porter that was really quite lovely.


Also by The Aperitif Guy...
A Brief History Of GinLocal 4 LentA Taste Of Italy, All The Way From LeedsRemembering Robbie Burns Over A Glass Of WhiskyWinter Warmers
A taproom hadn’t always been part of the plan for the move. It had long been a dream to serve beer directly at the brewery “in time,” but the sheer size of the new unit has allowed them to make this dream a reality now. The move has seen the creation of a dedicated social space, with a huge viewing window into the brew room. It has a smaller space for private parties above the bar and a large beer garden that catches the sun all day. Tom is already exploring ideas for providing food on site, and they have taken on a well-known and popular manager to run the taproom.

The brewery now employs 16 people directly, including new bar staff and the manager. I did ask Tom to estimate how many jobs are supported in the region indirectly by the brewery, but he wasn’t willing to have a guess. I’d imagine a well-established name like Rooster’s probably supports a good couple of hundred jobs through its supply chains and in the pubs that sell its beer. For that reason alone, we can all rejoice in its expansion.

Hornbeam Park is not in the middle of Harrogate, so won’t feature on anyone’s town-centre pub crawl, but the distance offers as many opportunities as challenges. Sited in the most commercial part of the town, it has hundreds of thirsty workers on its doorstep, as well as a hotel, gyms and the Harrogate College. It’s less than 10 minutes’ walk from Hornbeam Park railway station, on the Harrogate-Leeds line, and has no near neighbours to disturb at night. With the loss of so many traditional pubs in the area, I can see it becoming the place to drink for quite a few residents in the southern part of Harrogate, and I doubt it will be long before Tom is advertising festivals, band events, open days, tours and whole host of exciting events to draw in the crowds. Wedding reception at a brewery, anybody?

And the opening night? Well, we were the nearest thing to paparazzi, and Madonna appeared to have lost her invitation again, but it was a fun night, in a friendly pub with good beer. You can’t say better than that.

More information about the Rooster’s Taproom, including opening times, can be found on the Rooster’s website: https://www.roosters.co.uk/taproom-

The Aperitif Guy has a regular blog at blog.theaperitifguy.co.uk or you can follow him on Twitter @AperitifGuy