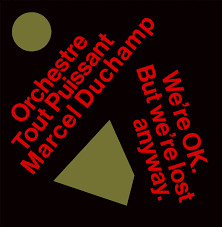 If you feel like discovering some new music that transverses genres and concepts from post punk to free jazz then you might enjoy this varied album from Orchestre Tout Puissant Marcel Duchamp.

The Orchestre are a 12 piece from Switzerland with guest English singers. It is not however, an easy listen - the listener has to give the album time to reveal itself.

If Later … With Jools was still airing on BBC2 the Orchestre would provide a good musical diversion for Mr Holland. They are the type of act that would appear on the show and would make you think afterwards “what was that all about?”

The tracks here continuously show disregard for genre and traditional song structures. Lead single Beginning kicks things off with a dark and minimalist groove, eventually building up to a climax with an epic ending.

Second single So Many Things (I Feel Guilty About) mixes a gritty 90’s post punk sketch with a bouncy rhythm which features English vocalist Abby Vulliamy.

Beginning feels like a throwback to acts such as Talking Heads before they went down the commercial route.

The album concludes with Silent where a violin mixes in with a vocal that sounds like Sinead O’ Connor or come to think of it, Enya.

You probably would not play the album again in quick succession - give it a few days before you make another listen and you will learn that by refusing to stand still and stick to any genre that they are a force to be reckoned with. *****