Our Man in Havana: A Very Unconventional Spy Story

Graham Greene in 1939
You always know you’re in safe hands with a Graham Greene novel, which can be reassuring when you’re in need of a new read and end up reaching for one of those familiar, orange-jacketed Penguins. And what could be more appropriate, whilst stuck at home, than a vicarious trip to Cuba on a sun-drenched holiday?

Greene’s Our Man in Havana (1958) is not a spy story in the traditional sense; if anything, it openly satirises the Secret Intelligence Service.

Our protagonist is as far from his contemporary, James Bond, as you could possibly imagine. He is an expat Brit, based in Cuba, but in the lowly capacity of a vacuum cleaner salesman. And, though he is also a James, his surname, sadly, is Wormold. Now there’s nominative determinism for you! With an appellation of this sort, you don’t visualise an alpha male, firing on all cylinders; rather a down-trodden, milk-livered nobody. Sure enough, that’s exactly what we get: a drinker, barely making ends meet, held hostage to the profligate spending habits of his teenage daughter, Milly.

That is, until a fellow countryman by the name of Hawthorne visits his shop with a unique proposal. In short, the “Service [must] have [its] man in Havana”, and Hawthorne sees Wormold as the man for the job.

As of this moment, you might be misled into thinking Greene is initiating a spy story, what with Wormold being asked to conduct surveillance on the Cuban regime. But not so. Wormold doesn’t want to play ball, and has been practically cajoled into doing so by a fast-talking recruiting sergeant.

Wormold therefore proceeds to lead his masters at MI6 astray, accepting their generous pay packets without contrition. No espionage work of any kind is undertaken, no covert operations are enacted, his reports are entirely fictitious; he even goes so far as to invent fellow spy characters, whom he has supposedly sub-recruited, killing them off with impunity as soon as their respective actions and very existences become untenable. Such a charade he sees fit to maintain, even when an adjunct, Beatrice, is despatched to assist him in an administrative capacity – the Service somehow seeing fit to devote more resources to his cause. Greene renders MI6 very inept in this way, his portrayal being somewhat contrary to the well-oiled machine of Fleming’s Dr No, also released in 1958. Indeed, the Service appears to be delighted with Wormold’s reports, seeing continual progress in them, despite their nebulosity. In this respect, you’d now suspect Greene of shifting the tone of his story to comedy. One such report contains drawings of a supposed Soviet weapon, which are in fact schematics copied from one of Wormold’s model vacuum cleaners, only with the dimensions slightly enlarged! This a moment of comedy gold reminiscent of one of the old Ealing pictures, and it is perhaps no coincidence that the 1959 film adaptation featured Alec Guinness, one of Ealing’s perennial stalwarts.

Certainly there is always an acute, cutting humour and searing wit to Greene’s writing. There will always be at least one, if not several, zingers that stay with you. Havana is no exception. In my case, the line that did the trick was Greene’s description of Captain Segura, Havana’s chief of police: “He had an easy rapid insolence you had no time to resent before he had given fresh cause for annoyance”. 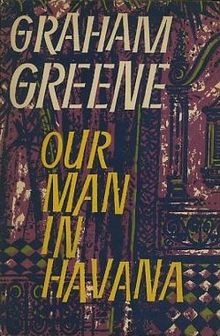 First Edition Cover
Greene also uses character to great comedic effect in Havana. There are no stock additions to be found in his dramatis personae. Each character rests indelibly on your memory, from the Service’s absurdly-monocled spy chief to Wormold’s obsequious sales assistant, Lopez. Not least Beatrice, the feisty and polymathic new secretary, who makes her first appearance halfway through the novel and pretty much rules the roost from then on in, taking charge of the operation, if not the main thrust of the remaining narrative!

And yet, for all its comedic overtones, Havana is a little too close to vice and violence to pass for an outright comedy. The hands of Captain Segura, for instance, are a little too bloodstained for him to be of conceived of simply as a laughable authority figure – literally so, if the rumour of his cigarette-case being coated in human skin is to be believed! Additionally, you fear for Wormold as he continues to spread his tissue of lies. At times you’re practically willing him to end his bluff before matters get out of hand. But no, it comes to the point where the opposition views Wormold as a legitimate threat, and devises a plan to assassinate him!

There are also political tensions underpinning Havana, which throw a different perspective on the novel’s lighter touches. Contextually, the novel was well-timed, depicting the turbulence of its setting during the Cuban Revolution. Written during the final days of the Batista regime, Greene appeared to be painting his picture with an all-too-prescient brush. Shortly after Havana’s publication, Batista had been defeated and Castro instated as prime minister. And this hadn’t been the first time Greene had written a novel on the cusp of a crisis. His earlier work, The Quiet American, researched and set in Saigon, was published in 1955 at the commencement of the Vietnam War. Either he had been astonishingly forward-thinking in his anticipation of political powder kegs, or his works were coincidentally well-timed. In each case, he had perceived the loose pebbles before avalanche!


Also by James Goodall...
The Digital Cage – What Price Progress In H. G. Wells’ The Shape Of Things To Come And Heather Child’s everything About YouWhat Is Alien? Bridging The Abyss In The Man Who Fell To Earth And Under The SkinLockdown Discoveries: Character And Class In Jane Austen’s EmmaLessons From The Past: A Retrospective Of Mary Shelley’s The Last ManSci-fi For Our Times: Rediscovering The Body Snatchers And Roadside Picnic
When it came to filming Havana in 1959, representatives from the new regime actually participated in its production, to ensure proper representation. The film was directed by Carol Reed, who had previously directed Greene’s The Third Man to great acclaim. There are very few adaptations for cinema which surpass, or at best equal, their literary peers. The Third Man manages this rare feat, with Orson Welles cast memorably as the elusive Harry Lime. Havana, on the other hand, is less well-remembered.

And this is all too often the case with adaptations of Greene’s works. John Boulting’s 1948 treatment of Brighton Rock makes a decent stab, but doesn’t quite pack the same punch as the original page-turner. 1944’s The Ministry of Fear is largely unknown, despite being directed by the legendary Fritz Lang, of Metropolis fame. I would argue this is the case largely because reading a Greene novel is an oddly more cinematic experience in its own right, despite the difference in medium. Perhaps this is the reason why so many of his works have been adapted for the big screen. But the film treatment of Havana is nowhere near as brutal or visceral as its original source material. So, too, with Brighton Rock, despite a stellar performance from a young Richard Attenborough. You could argue this may have been due to the censor of the day, which will have toned down certain depictions of sex and violence for general cinema viewing. As a consequence, such film treatments of the 1940s and 50s were oddly more prudish than their literary models. But, even by more modern standards, say Philip Noyce’s 2002 Quiet American – which is a perfectly serviceable, step-by-step adaptation, with Michael Caine perfectly cast as Fowler – this still doesn’t quite capture the grittiness or even the humour of Greene’s original pages.

In short, and though it is a rather facile point to make, there is a greater world of enjoyment to be found in Greene’s original works than their filmic counterparts. Sometimes it is possible even to be deterred from reading a novel where you know its associated movie isn’t quite packing the same heft. But we needn’t be. Every novel is an artistic entity in its own right and deserving of its own attention. And with Our Man in Havana, you won’t be disappointed.