Debs Newbold
Square Chapel Arts Centre in Halifax presents an ambitious new co-production with their associate artist Debs Newbold (King Lear Retold, Lost in Blue), generously funded by Arts Council England. Outrageous Fortune is a piece of theatre inspired by Shakespeare’s Hamlet, but projected through the eyes of his mother, Gertrude. A fearless woman whose power is consistently undermined by the men around her, and whose character is typically sidelined in traditional stagings of the work, this unique, parallel narrative is a bold exploration of femininity, power and sexuality and will demand answers that take us beyond Hamlet as we know it.

How does a mature, experienced woman respond to having her sexuality ridiculed, power quashed and agency denied by the men around her? What would Gertrude make of female post-forty sexuality in 2019? In the 400 years since Hamlet was written, what has changed? Set in purgatory and placed under a twenty-first century lens where #metoo and #timesup campaigns are publicly shaming inequality, corruption and the abuse of power, Outrageous Fortune will offer an alternative perspective that is both funny and fierce, putting a woman front and centre in a notorious story of male revenge. Debs Newbold explains:

Gertrude would have loved the chance to tell her story. In Hamlet, Shakespeare hardly lets her speak. Well now, she’ll have me. And a drum kit. So, she can make as much noise as she likes. 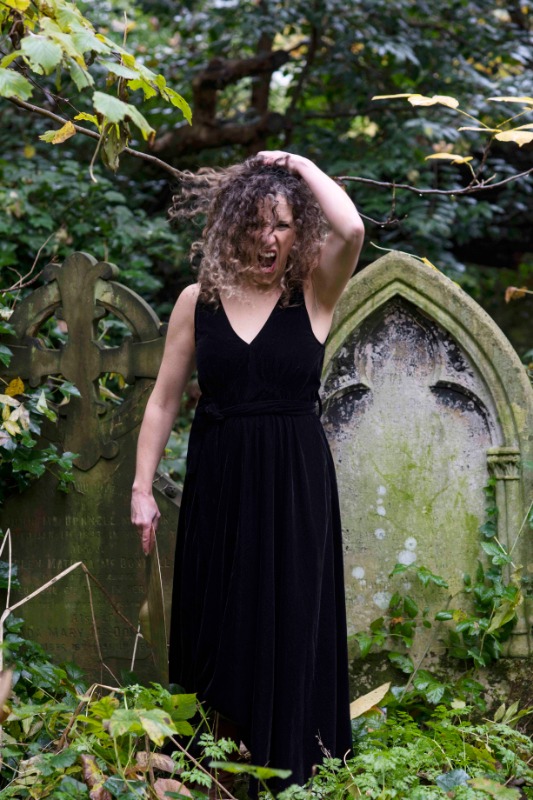 Following a successful research and development phase supported by Harrogate Theatre, York Theatre Royal and Greenwich Theatre, the new production will be performed at its premiere at the Halifax Arts Centre on Wednesday 25 and Thursday 26 March, followed by a national tour. This is the first time ever that the arts centre, in the heart of Halifax, has independently produced a piece of work that will subsequently go on tour to other UK venues.

Debs Newbold of Calderdale, West Yorkshire, is one of the UK's leading performance storytellers, creating fresh, playful work that will dig deep beneath the skin. Her charisma and innovation have seen her work with prestigious venues such as the Royal Opera House, the Southbank Centre and Shakespeare's Globe among many other theatres and festivals, both in the UK and internationally.

I have long admired Debs’ enthusiasm, passion and exquisite skill for the work she creates. Whether it’s a brand-new piece of writing or a retelling of an existing text, her delivery is fierce and charming in equal measure. I’m particularly excited about this collaboration with John Wright and Luke Harney, and the new dimension that a live drum score will bring to her work. It’s also an honourto be producing this show and being part of the team who will be taking the first Square Chapel production on tour across the UK.

For more information and to book tickets, theatre goers can visit www.squarechapel.co.uk or call the box office on 01422 349422.