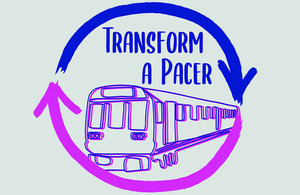 Three winners to receive a Pacer carriage for community use.

Platform 1 mental health charity, Airedale NHS Trust and Fagley Primary School announced as 3 winners of the Department for Transport’s Transform a Pacer competition on the One Show
winners have each won a Pacer carriage to renovate for a new future
competition marks removal of Pacers from the rail network and a renewed focus on levelling up infrastructure in the north

Three groups in the north of England have won a Pacer carriage for community use as part of the government’s Transform a Pacer competition. The competition means that after 3 decades of service to northern communities retired Pacer trains will now serve them in new and exciting ways focused on bringing the community together.

The proposals put forward by Airedale NHS Trust, Fagley Primary School, and men’s mental health charity Platform 1 showcase the best ideas that came out of the competition. Their plans will help to improve NHS services, science and technology education and mental health care in towns and cities in the north.

Platform 1, a men’s mental health charity, will be converting their Pacer into a kitchen to teach cooking skills to those they support. The charity, located at the former Platform 1 of Huddersfield Station, already use retired train carriages as a safe space, counselling and learning environment to help hundreds of local men deal with mental health issues.

Airedale NHS Trust plan to transform their carriage into a mixed-use, non-clinical space to improve the experience of patients using Airedale General Hospital. With a particular focus on helping children and families, as well as those suffering with dementia, it will provide a unique communal environment to support patients during their stay.

Fagley Primary School, based in Bradford, will set the Pacer up as a new science lab for students, helping promote STEM learning. The train carriage will also benefit the wider community, who will have access to the space for talks and events.

The winners were announced on last night’s The One Show on BBC One. Platform 1 was profiled as part of the show alongside other shortlisted entrants. The programme spoke to staff, volunteers and people whose lives have been improved by the mental health charity.

Transport Secretary Grant Shapps said:
"The 3 winners are incredibly deserving, having presented creative and innovative ideas that will see their Pacer have a lasting and positive impact within their community.

"As their 3 decades of service comes to an overdue end, it is satisfying to know that new life for 3 of the last Pacer trains will ensure future generations can experience them in a different light."

"Lots of communities have benefited from this action over the years, we only have to look at the preserved railways and what they mean to rural communities.

"Where passengers might not miss the Pacers – their loss to the railways are these organisations’ gain."

The judging panel have worked through submissions to decide on 3 winners, selected for their creativity and their potential to engage with and serve the local community. The winners were the best examples of projects that will change lives and help those in need in the local area.

The Department for Transport will now work with the winners to start on the installation and conversion of the former train carriages.