York Theatre Royal’s 2020/21 Cinderella may have been postponed until next year – but the good news is that there will still be a panto this year! 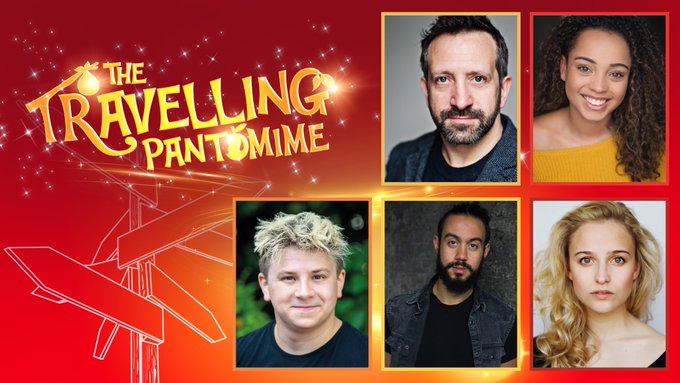 Rehearsals began this week for the Theatre Royal’s Travelling Pantomime - which is planned to tour every neighbourhood, in York, all 21 wards in fact. This follows confirmation from the Government’s Department of Culture, Media and Sport that though entertainment venues must close from Thursday, theatre rehearsals may continue behind closed doors.

An upbeat Chief Executive, Tom Bird, said:
“We are delighted to welcome our fantastic cast to York Theatre Royal to begin rehearsals for our Travelling Pantomime. We have put Covid safety measures in place and will be carefully following Government guidelines over the weeks ahead but are thrilled that we can carry on with our plans to take our Pantomime out to the people of York this year.’

Promising more details to come, he added:
‘We also plan to film and broadcast the show, so be assured, one way or another York Theatre Royal’s Travelling Pantomime will be coming to you.”

York Theatre Royal’s Associate Director Juliet Forster directs the Travelling Pantomime, with Hannah Sibai as designer and Hayley Del Harrison as choreographer. Musical director is James Harrison, who was musical supervisor-director for Cinderella at Sheffield Lyceum Theatre last Christmas, for which he scooped the Best Music prize at The Great British Pantomime Awards.

The cast of five includes several performers familiar to York Theatre Royal audiences. Robin Simpson (Dame Dolly) was last seen there in Northern Broadsides Much Ado About Nothing. Other YTR appearances include The Railway Children, The Wind in the Willows, Pinocchio and Pygmalion. He has played Dame at the Lawrence Batley Theatre for the last three years.


Also by Andrew Liddle...
Doors Opening For The Georgian Theatre RoyalAnd Then There Were TwoMeet Magic Rock's Christa SandquistSunak Is A Bit Of A DragRadio Gaga
The cast includes York entertainer and magician Josh Benson, whose previous credits include the BBC Morecambe and Wise biopic Eric and Ernie (playing Little Ernie) and the musical Calendar Girls in its world premiere production in Leeds and at London’s Phoenix Theatre.

Actor and writer Reuben Johnson (Fleshcreep / Ratticus Finch) was seen in the YTR production of Arthur Miller’s A View from the Bridge last year.

Intriguingly, audiences will have a say in which of three of the most popular pantomime titles they want to see - Dick Whittington, Jack and the Beanstalk or Snow White.

Award-winning pantomime writer Paul Hendy is writing all the scripts and with the actors performing whichever show the audience choose on the night.