South Yorkshire Police and the RSPB are appealing for information regarding the poisoning of a young peregrine falcon found on the outskirts of Barnsley in July this year. 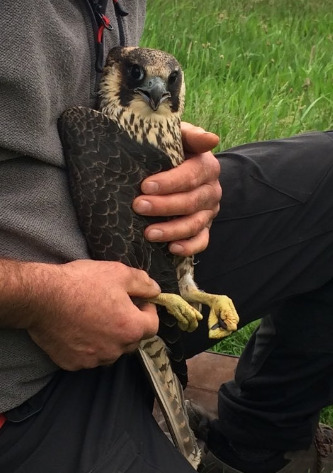 The bird was discovered ill and unable to fly in the Fish Dam Lane area, on 4 July 2020. Sadly the bird, a juvenile which will have only hatched this summer, subsequently died. The body was forensically examined under the Wildlife Incident Investigation Scheme administered by Natural England, and the results showed that the bird contained the highly toxic pesticide bendiocarb, and that poisoning was the cause of death.

PC Fran Robbs de la Hoyde of South Yorkshire Police said:
“It is believed the poisoned peregrine falcon ingested bait laced with the poison which may have been deliberately set out to target a bird of prey. Poisons commonly used to commit a crime like this are incredibly toxic to humans and pets, and should any person locate any dead or injured birds they are strongly advised not to touch them or let pets come into contact with them.”

Tom Grose, RSPB Investigations Officer, said:
“It’s always a privilege to catch a glimpse of a peregrine. The fastest birds in the world, they are highly adaptable creatures and often make their homes in urban areas these days. Bendiocarb is one of the most commonly-abused substances for the illegal killing birds of prey and we have sadly seen it used for this purpose on many occasions.

“We’re facing a worsening climate and ecological emergency and losing our wildlife at a frightening rate. We all have a role to play, which is why we need an immediate halt to incidents such as this. We urge anyone with information to come forward – together we can bring the illegal killing of wildlife to an end.”


If you have any information relating to this incident, call South Yorkshire Police on 101 and quote the crime reference: 14/104692/20.

If you find a wild bird of prey which you suspect has been illegally killed, email RSPB Investigations on crime@rspb.org.uk or fill in the online form: https://www.rspb.org.uk/our-work/our-positions-and-campaigns/positions/wildbirdslaw/reportform.aspx

You can also call the confidential Raptor Crime Hotline: 0300 999 0101. This is for sharing information related to the illegal killing or targeting of birds of prey only.