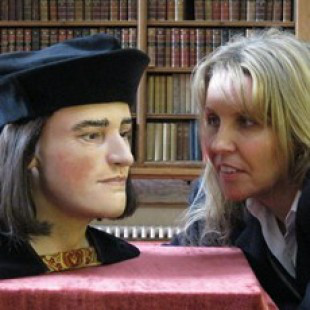 On 22 August 1485 Richard III was killed at Bosworth Field, he was the last king of England to die in battle. His victorious opponent was Henry Tudor (the future Henry VII). Richard's body was displayed in undignified fashion for two days in nearby Leicester and then hurriedly buried in the church of Greyfriars. Fifty years later, at the time of the dissolution of the monasteries, the king's grave was lost. It was thought that the body had been thrown into the River Soar, and that the coffin had been used as a horse trough.

Philippa Langley was a screenwriter who had become fascinated with Richard who had become a byword for a ruthless and heartless King, after starting to read about him. 'It was a revelation, he was pious, loyal and just, and I wondered how he can exist in both universes.' As part of her ongoing research she visited a car park in Leicester, and explained 'I just felt that I was walking on his grave' as she stood on the very spot where years later his body would be discovered.

Historian Michael Jones felt that as part of their quest to explain the real Richard that 'his reputation had been buried under a mound of hostile propaganda that had started with Henry Tudor, to reinforce his claim to the throne. More importantly though it meant that they were fighting against the power of Shakespeare.

The authors talked through the incident for which Richard is most well known, the mystery of the Princes in the Tower. While writing they still couldn't agree on what they thought had occurred, so both of their opinions were included in the book. Philippa Langley felt that 'it was against his character, and that the incident would have played into the hands of his enemies.' Michael Jones set it in the context of the times, and felt that 'he would have only contemplated it with utmost reluctance, but that he had felt compelled to preserve his dynasty.'

As the event drew to a close though and questions were invited from the audience, it was fitting that the question that most people wanted answering was left to the end. Where did the people who had found Richard III think that he should be buried?

Philippa Langley who had spent eight years on the project took a deep breath before explaining that 'the due process of law now has to take place. I get where York is coming from, I'm from North Yorkshire, but when I went into Leicester Council to ask them for permission to dig up the car park, they said that he had to be buried in Leicester.'

Michael Jones eloquently summed things up when he said 'the most important thing is not where he is buried, he had no dignity in his death,' and dignity for his burial is what he wants now for Richard.

The Search for Richard III The King's Grave is published by John Murray Publishers.