Planning permission has been granted to build the country’s first national Holocaust Memorial and Learning Centre in Victoria Tower Gardens, next to Parliament, with construction starting later this year. 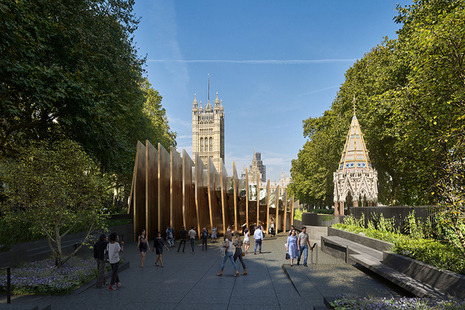 The new Holocaust Memorial will be the national focal point to honour the 6 million Jewish men, women and children who were murdered in the Holocaust, and other victims of Nazi persecution, including the Roma, gay and disabled people.

The co-located Learning Centre will also focus on subsequent genocides in Cambodia, Rwanda, Bosnia and Darfur. The world-class facility will give visitors powerful and engaging experiences to learn about the Holocaust and subsequent genocides through a variety of mediums including historic photographs, film footage and audio recordings so that the stories of survivors can be heard by younger generations, present and future.

The government will provide free entry to all visitors, in perpetuity. Government support will supplement funds raised from visitor donations and other charitable contributions to cover the running costs of the Memorial and Learning Centre which is expected to open in 2024. The government has already announced that it will contribute up to £75 million towards construction costs, to be supplemented by £25 million from charitable donations.

Following planning approval, works will start on the site later this year with an anticipated completion date of 2025.

The decision comes on the back of the sad loss of Asa Bruno of Ron Arad Associates, a crucial member of the design team.

Communities Secretary Rt Hon Robert Jenrick MP said:
"This is an important moment for the whole country: today’s decision means that the National Holocaust Memorial and Learning Centre will be built in the heart of Westminster, right next to Parliament. The government will now move forward with the construction of the memorial, which will start later this year.

"We have a duty to ensure that the history of the Holocaust is never forgotten and never repeated – the Memorial and Learning Centre will allow everyone to reflect, remember and honour those who suffered and died and to educate future generations in anti-Semitism, where, if unchecked, antisemitism and hatred can lead.

"I’d like to thank all those who have worked tirelessly – and will no doubt continue to do so – to make this a reality. The UK Holocaust Memorial Foundation is driving this project forward and I know this will be deeply appreciated by many, including Holocaust survivors who can be assured that their stories and the history of the Holocaust will continue be told to future generations."

Eric Murangwa Eugene MBE, Survivor of the Genocide Against the Tutsi in Rwanda, said:
"I am extremely delighted by today’s decision to grant planning permission to build the UK Holocaust Memorial and Learning Centre at such an iconic location in London. This is truly a ground breaking moment, and I most sincerely wish that the UK and the world will use this centre to learn more about the Holocaust and other Genocides, remember and honour the victims but more importantly, to renew our commitment to the concept and obligation of Never Again."

Ed Balls and Lord Pickles, Co-Chairs of the UK Holocaust Memorial Foundation, said:
"This is an important milestone, bringing closer the day when we have a national Memorial which properly commemorates the 6 million Jewish men, women and children and all others murdered by the Nazis.

"Our planning system is rigorous, fair and transparent, and enables all points of view to be expressed. I’m grateful to the Minister and the Planning Inspector for giving such careful thought to our plans and to the objections raised. Our responsibility now is to move as quickly as we can towards completion, creating a Memorial that the whole nation can be proud of, and one which ensures that essential lessons are never forgotten."

Speaking on the passing of Asa Bruno, Lord Pickles said:
"Asa, had so much to give, his patience and calmness at the planning inquiry did us all a great service."

Chief Rabbi Chief Rabbi Ephraim Mirvis said:
"This is a significant moment on our journey towards a major national Holocaust memorial. Now the sacred work to enshrine our country’s commitment to teaching the essential lessons of the Holocaust in a monument and learning centre beside parliament, can truly begin. I would like to take this opportunity to thank all those responsible for bringing the project to this point, particularly Ed Balls, Lord Pickles and their team.”


Sir Ben Helfgott, Holocaust survivor, said:
"Holocaust survivors like me came to the UK after liberation, and we made Britain our home; British forces liberated my sister at Bergen-Belsen concentration camp. The Holocaust is part of British history.

"I am proud that the UK Holocaust Memorial and Learning Centre is being built, in the heart of our country, so it can be visited by millions. I know that long after I, and the other survivors, are gone, the UK will continue to remember the Holocaust and learn what happened when hatred reigned."

Karen Pollock CBE, Chief Executive, Holocaust Educational Trust, said:
"As the Holocaust moves from living memory to history, there could not be a more important time to build this Memorial, in the shadow of Parliament, as a reminder for generations to come of what happened when antisemitism and hatred were able to flourish. This Memorial and Learning Centre will be an important addition to the excellent foundations of Holocaust education and remembrance already established in this country and will help to ensure the legacy of the Holocaust for generations to come.

"The Holocaust is part of our shared history that everyone should know about and remember, and I’m proud that this UK Holocaust Memorial and Learning Centre is going to be built at the very heart of our democracy."

Nina Olshan, Micro Rainbow
"We support the decision to build this memorial in the centre of London, remembering the 6 million Jewish men, women and children murdered in the Holocaust as well as all other victims of Nazi persecution. It is essential that this memorial captures the diversity of the communities the Nazi’s murdered. This memorial can serve as a reminder of how far we still have to go."