Poem Of The Week: 'Forget What Did' By Philip Larkin 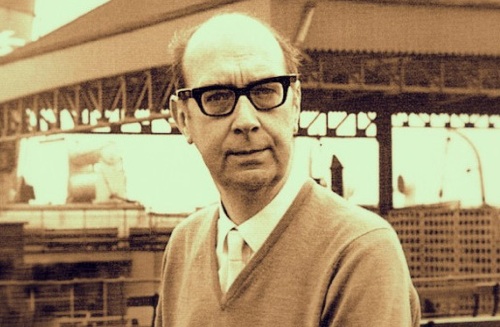 Philip Larkin
Forget What Did

Stopping the diary
Was a stun to memory,
Was a blank starting,

One no longer cicatrized
By such words, such actions
As bleakened waking.

I wanted them over,
Hurried to burial
And looked back on

Like the wars and winters
Missing behind the windows
Of an opaque childhood.

And the empty pages ?
Should they ever be filled
Let it be with observed
Celestial recurrences,
The day the flowers come,
And when the birds go.


Though Philip Larkin was always capable of poetic levity, 'Forget What Did' is as serious in theme and tone as any of his oeuvre.

And in a sense, the ceasing of a diary foreshadows the poet's testamentary wish a decade or so on from the publication of his last collection, High Windows, from which this poem is taken: all of Larkin's diaries were to be destroyed subsequent to his death.

The tendency of diaries to illuminate former pain, and failure to convey a truth beyond the humdrum, gives impetus to this fine perambulation on the subject of change, escape and release.

This being Larkin, inference can never be free of the suspicion of ambiguity: his narrator's reflection is retrospective, conceived in hindsight, as though the decision to close down that part of personal memory that amounted to what, elsewhere, he calls a 'forgotten boredom', was made at some unspecified point in the past. But the failure of the diary's words to any longer heal, to cicatrize, the open wound of a former existence underwrites, rather than otherwise, the significance of that time, and by extension, its recorded emollient.

The dull, daily ache of 'bleakened waking' precipitates an urgency to be free of documentary reminders. Larkin's subsuming of the details of an introspective provincial life into a detached, acceptably contained, generalia, is a brilliant representation of the power of distilled economy...and a careful concealment:

Like the wars and winters
Missing behind the windows
Of an opaque childhood.

The culminating visionary landscape of yearning is, for this poet, a not untypical moment of transcendence. Larkin's near-injunction is a monumentally affecting celebration of people-less seasonal and equinoctial 'recurrence', reflecting a desire, almost, for Heraclitean immersion into that which is permanent and inviolate.