Poem Of The Week: 'Digging' By Seamus Heaney 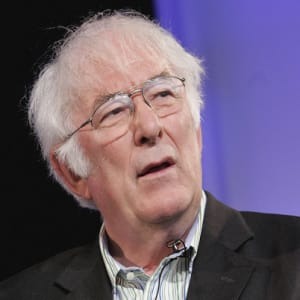 Between my finger and my thumb
The squat pen rests; snug as a gun.

Under my window, a clean rasping sound
When the spade sinks into gravelly ground:
My father, digging. I look down

Till his straining rump among the flowerbeds
Bends low, comes up twenty years away
Stooping in rhythm through potato drills
Where he was digging.

The coarse boot nestled on the lug, the shaft
Against the inside knee was levered firmly.
He rooted out tall tops, buried the bright edge deep
To scatter new potatoes that we picked,
Loving their cool hardness in our hands.

By God, the old man could handle a spade.
Just like his old man.

My grandfather cut more turf in a day
Than any other man on Toner's bog.
Once I carried him milk in a bottle
Corked sloppily with paper. He straightened up
To drink it, then fell to right away
Nicking and slicing neatly, heaving sods
Over his shoulder, going down and down
For the good turf. Digging.

The cold smell of potato mould, the squelch and slap
Of soggy peat, the curt cuts of an edge
Through living roots awaken in my head.
But I've no spade to follow men like them.

Between my finger and my thumb
The squat pen rests.
I'll dig with it.

This early exemplar of Seamus Heaney's poetry made a kind of statement of intention: a declaration of poet as artisan wordsmith, claiming ground previously trodden by generations of his farming forefathers, as fertile land for the growing of words.

That 'Digging' is the first poem in the first volume Heaney published - Death of a Naturalist - consolidates a more general approach he had initially aired to the Belfast Group of poets, before publication in 1966. Although many poets have spoken of the profound sense of self-worth conferred by identification, few have done so with such poignant gravitas, or affecting simplicity. 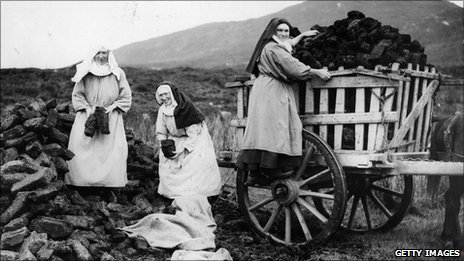 Ted Hughes' hymning of the 'square shouldered self-respect' achieved through writing, and Tony Harrison's 'busking' of his father in his own words, both demand to be heard, but Heaney's phenomenally skilled use of form and language acts to underwrite historical continuity, and to declare cultural allegiance, by rendering poet and artisan indivisible in ways that run deeper than a turf trench.

Present in his imagination as he writes, the narrator conjures a vision of his father and grandfather, each at his labours, each blent in an act of reverence before his potato-bed or peat hag, as strong and silently stoical as oaks. Not reverence in the religious sense: rather, in the paying of due homage to a landscape both men understand instinctively, a terrain which commands respect as it yields to the 'bright edge' of steel.

The clever metrical heft of the verse - mostly steady iambics - shadows the regular 'clean' rasp of a sinking spade, and the slicing and chopping of soil or turf which follows. But most we remember the satisfying extraneous sounds of the farm and the moor, rendered onomatopoeically: the rasping, straining, heaving, squelching and slapping which effortlessly draw the reader - or more properly, listener - to a rural Northern Ireland of the imagination.


Also by Steve Whitaker...
Poem Of The Week: 'In Memory Of Jane Fraser' By Geoffrey Hill (1932-2016)Poem Of The Week: 'Edwardiana' By Geraldine ClarksonPoem Of The Week: 'Italy Vs. England' By George Gordon, Lord Byron (1788-1824)Flags And Flowers: These Mothers Of Gods By Rachel BowerCustody Of The Eyes: Like A Tree Cut Back By Michael McCarthy
We do not hear the sound of a trigger being pulled, but the double-edged presence of a gun image early in the poem strikes a deliberately discordant note.

Guns are not unusual in farming communities - the unsentimental facts of economic survival sometimes demand a pragmatic brutalism - and it is possible that Heaney is echoing his fear for an, at this point, uncertain writer's future in this unsettling oxymoron. But it is also seems likely that the 'Troubles', which began only a couple of years after this book was published, and continued for a further thirty, were stirring in the poet's mind at the time of writing.

Heaney finds a metaphor for the act of poetic creation, the art of writing itself, in the measured, rhythmical tilling of the land in 'Digging': grandfather, father and son are bound together, through labour and love, in an arc of endurance which is both productive and self-sustaining. The poem's final three lines - now as frequently repeated as many in Shakespeare - stake a claim for the idea of poetry as work, and vocation.