Poem Of The Week: 'First Foetal Movements Of My Daughter' By Penelope Shuttle

First Foetal Movements of My Daughter

Shadow of a fish
The water-echo
Inner florist dancing
Her fathomless ease
Her gauzy thumbs
Leapfrogger,
her olympics in the womb’s stadium 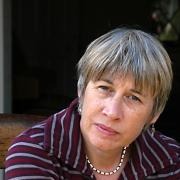 Penelope Shuttle
Against a cheerless backdrop of death and decline, of withering economies and strategic cluelessness, it is a simple joy to recall a poem of growth and hope. In Penelope Shuttle’s delicate, focused use of language, we hear the first echoes of life, feel the abstraction of an idea bursting from inertia into physical presence, like an astonished nudge.

For here is the obverse of entropy and dissolution: Shuttle’s skill at concision, at the accretion of metaphor to recreate the first impression of movement in amniotic suspension, is amphibian by suggestion – the autonomic responses of scientific observation take on the vigour of new meaning in a moment of overwhelming emotional engagement.

This necessarily brief celebration – the moment demands no more and no less of the poem – is a prelude to the final line, whose opening out into the ‘womb’s stadium’ anticipates an emergence into another kind of light, the final stage of a journey where the fragile occlusion of ‘gauzy thumbs’ clears to a baby’s tiny, heartbreaking grip.


‘First Foetal Movements of My Daughter’ is taken from The Penguin Book of Contemporary British Poetry.


Also by Steve Whitaker...
'As Though To Breathe Were Life' : Appius And Virginia By G.E. TrevelyanPoem Of The Week: 'Snowdrop' By Ted Hughes'To Travel Hopefully' : Stations Of The Mind'Thick Like Cream; Perfect Like An Egg': Beneath The Trees Of Eden By Tim BindingInto the Light: Sheaf (Digital) Poetry Festival 2020