Poem Of The Week: 'Lacrimae Hominis' By Vicki Feaver 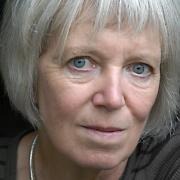 You’ve cried three times, you say:
once when your mother died,
once when you visited her grave,
and now, in powdery dawn,
as I sing, tentatively,
a song she used to sing,
‘The Ballad of Barbara Allen’.
Are you crying? Your eyes shine –
but the cheeks I touch
are hot, waterless.
If I dived into the black light
of your pupils, I’d break my head
in a dry pool. If I took an axe to you,
you’d weep like a fir –
resinous tears, amber drops
hardening in the air.

‘In a good poem the poet disappears’. The ‘strongbox’ of words affords protection for the poet, enabling a degree of detachment for the prosecution of emotional scrutiny. Vicki Feaver’s words breathe definition into a poem which is as ambiguous as it is subcutaneously pained.


Also by Steve Whitaker...
Poem Of The Week: 'Grace Darling' By Michael LongleyReview: Atalanta Forever At Piece HallPoem Of The Week: 'Those Winter Sundays' By Robert Hayden (1913-1980)The Smell Of Lemons: Japan Stories By Jayne JosoPoem Of The Week: 'Everest' By David Wilson
The address, here, may or may not be apostrophic; we cannot be certain if the figure is dead or alive, and only the poem’s title hints at gender: is the addressee the narrator’s husband or father, or is Hominis the generic of ‘Mankind’, a deliberate reference to male hegemony? For certainly, the dictation of terms by the expression ‘Tears of Mankind’ is made ironic in the contextual fabric of Feaver’s short, brutally reflective lines by the subsequent indication of taciturnity, of studied dispassion.

The poem’s dynamic is unspoken, leaving suggestion to inference. Behind the arras lies the minefield of domestic tectonics, of the possibility of conflicts unresolved, love undeclared, a sense of loss. And in Vicki Feaver’s shocking and unexpected final imagery there is a vague suspicion of elegy alongside the need for restitution: the axe’s violent blows are tempered by a species of vulnerability, even if the tears are forced, or those of a crocodile.