Adrian Lukis, who starred in the renowned BBC TV adaptation of Pride and Prejudice, returns to the role of Mr Wickham to set the record straight in his one-man show Being Mr Wickham. Discover his version of some very famous literary events. What really happened with Darcy? What did he feel about Lizzie? What happened at Waterloo? Not to mention Byron … 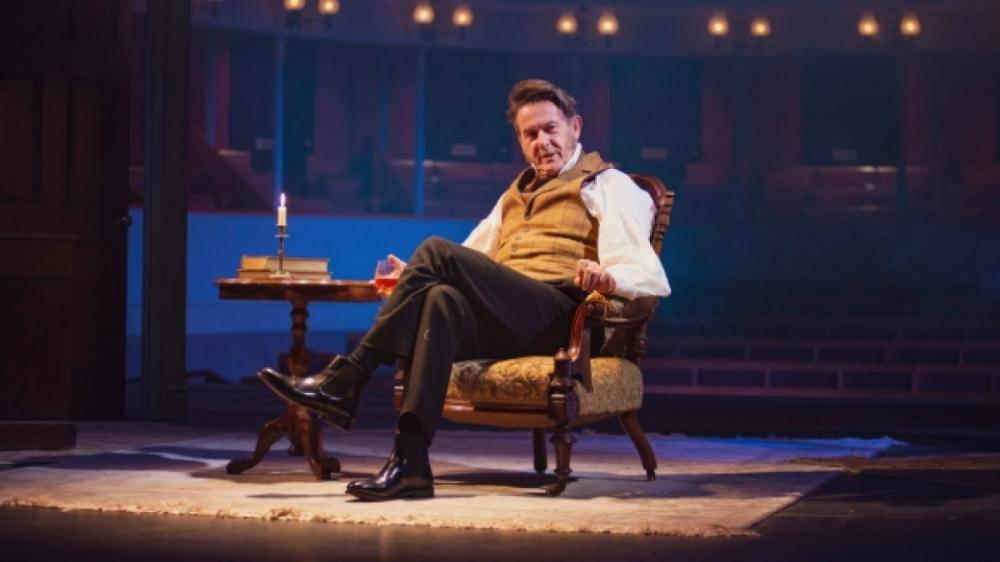 What inspired you to revisit the character of Mr Wickham, 25 years after playing him in the BBC adaptation of Pride and Prejudice?
When I turned 60 a few years ago, I started to wonder what it would be like for a man such as Wickham, who has been a rake and a ne’er-do-well, surviving on his looks and his wits, to have to deal with getting older. So I started to look at it with Catherine Curzon, who is an expert on the historical side of things, and read everything about Wickham and Pride and Prejudice I could get hold of. I found myself discovering how much I enjoyed the process of researching and writing. Once I started it just went like a storm.

The details we have about his life from the novel are rather sketchy. How did you go about filling in the blanks?
Firstly I looked at the way he is described. For example, Darcy says he has led a dissolute life in London, so I thought ‘well what really happened?’. I’ve also made up stories based on the historical facts, and imagined an entire life for him above and beyond the book. At one stage he enters a private club and gets into a punch up, but it’s based on a real place called Watier's in St James’s. I also wanted to explore things such as what he really thinks of Elizabeth Bennet, what he really thinks of Lydia. These questions were really interesting to me.

Seeing as he’s portrayed by Austen as such a rogue, did you feel it was important to fight his corner?
Absolutely. My premise was that people don’t tend to see themselves through a bad lens, and there are always two sides to a story. I could have written him like Flashman - an out-and-out bounder who just doesn’t care - but something I took very strongly from the book was that Wickham is plausibly a nice man. He is always described as being charming and amiable, rather than someone who’s constantly plotting and twirling his moustache. He admits he does some bad things, but turns it on the audience and asks ‘have you led a blameless life’? Also, he makes the point that life would be very dull without any rogues. I’d much rather spend an evening with him than with Darcy!

How do you think he would be thought of in today’s society?
It’s an interesting question. He would probably be labelled in contemporary terminology a bit of a ‘player’, and I think we all know men like that. But you have to view him in the context of his time. In Austen’s day, men who were not the first son had to set their cap at a wealthy heiress. That was a social pressure that we don’t really have today. So for a man with looks and charm like Wickham it made sense to try his luck with women, rather than going into the clergy. It would certainly be different today, although I think we are living through a very moral period, much more so than when I was growing up in the ‘70s. So perhaps he would still be considered a scoundrel.

Original Theatre Company filmed the production in an empty theatre during lockdown for a live stream. How did you find that experience?
It was certainly interesting, but it was inevitably a bit cold just being surrounded by cameras and technicians. There is no replacement for a live audience, being able to look at them and say, ‘you think you know my story but I’m going to tell you differently.’ I like to try and bring what I can of Wickham’s wit and charm to the table, and a lot of that has to do with looking the audience directly in the eye, which of course you can’t do in a live stream.

What are your memories of playing Wickham the first time round? Did you have any idea the BBC series would become such a phenomenon?
No idea at all, I don’t think any of us did. We knew it was a big production, and I thought the script was terrific, but we had no inkling of whether it would be a success. In that sense it was just another job. I remember writing to Colin Firth shortly after it came out, when he’d gone off to do some filming in South America, and saying words to the effect of ‘you have no idea what's going on back home, this series has gone through the roof and you’re famous.’ That being said a few weeks later we went for a pint together in London, and I thought we would get absolutely mobbed - Darcy and Wickham out together - but nobody recognised us!

Now it is finding a whole new generation of fans thanks to iPlayer and Netflix.
Yes, people seem to love it, even if they weren’t born when it first came out. And why wouldn’t they? It’s a really lovely adaptation of the most wonderful novel. Many people come up to me and tell me they still watch it with their family every year, which is great.

Was acting something you always wanted to do?
My father was in the Royal Marines and I was initially brought up in Australia, where I didn’t have much chance to try it out. But when I came to England in the 60s and was sent to public school, suddenly theatre was available to me and it was like being struck by a thunderbolt. I fell in love with it. My whole life soon became about being in school productions and when I was 17 I wrote my first play. At the time I thought I might be a playwright, so it’s nice I’m finally getting a chance to do it at 64!

You’ve clearly enjoyed the task of reimagining Wickham for the stage, but what do you think Jane Austen might make of it?
That depends on how you view her politics. She has been called all sorts of things, from a radical feminist to a staunch methodist. But I think it’s safer to assume she was something of a small ‘c’ conservative. So she probably would have disapproved of Wickham, and seen him as being a rather weak and vapid young man. But I hope if she was to see this production, she would say ‘good for you, you haven’t consigned him to the scrapheap and have found mitigating factors for his behaviour’.