After the deaths in recent days of both Murray Walker and Sabine Schmitz from the motorsport world I was also saddened to learn today of the passing of one of my footballing icons as a schoolboy, Peter Lorimer, aged just 74.

Record goalscorer Peter “Hotshot” Lorimer, (photo: Leeds United)
How I remember attending so many Leeds United games at Elland Road, stood on the packed Kop, as Don Revie’s mighty side achieved success after success. My personal hero was Allan “Sniffer” Clarke, but Peter “Hotshot” Lorimer was right up there too along with Billy Bremner, Norman Hunter, Jack Charlton, Eddie Gray and Johnny Giles to name just a few. Heady days indeed.

Lorimer was born on 14 December 1946 in Dundee, Scotland and signed for Leeds in May 1962. He made his first team debut in September of the same year in a home game against Southampton aged just 15 and is still the youngest player to ever appear for Leeds’ first team.

His glittering playing career, which included many appearance for his home country, featured two spells with Leeds during which he amassed a mighty 705 appearances and 238 goals and he remains the club’s all-time record goalscorer. He retired in October 1985 and sadly passed away after a long illness. 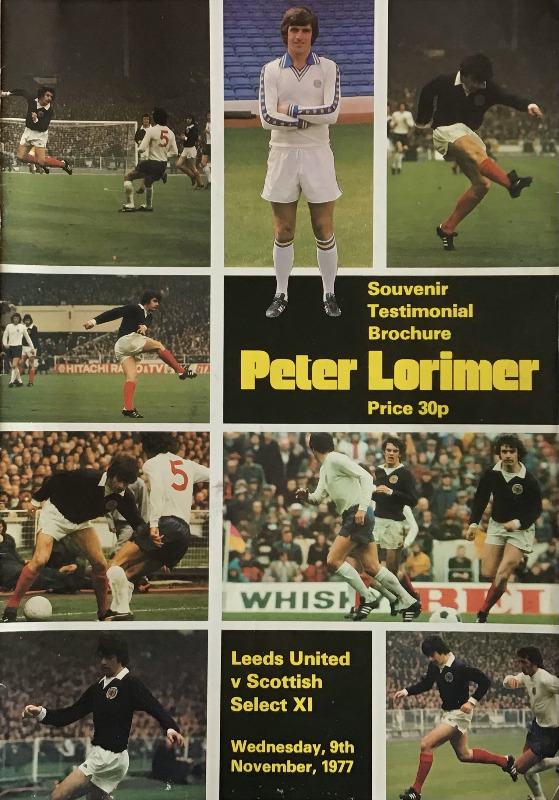 The souvenir brochure I still have long after attending Lorimer’s testimonial game in 1977
I may only have been young at the time, but well I remember attending Lorimer’s testimonial game at Elland Road back on 9 November 1977 when Leeds played a Scottish Select XI and I still have the souvenir brochure for the game which cost just 30p!

Rest in peace Peter with several other great Leeds United players who are no longer with us and thank you for the pleasure you brought so many of us throughout your illustrious playing career.