Real Heroes: The Girl Who Fell From The Sky By Simon Mawer 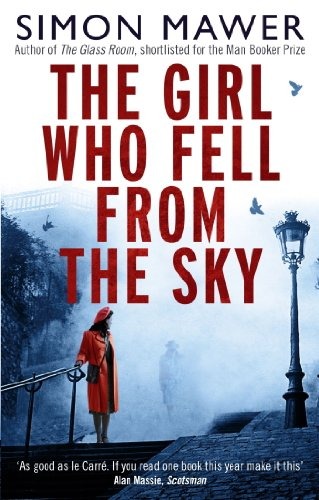 I have to admit, the Coronavirus is worrying, not only because of the financial and economic implications both for individuals and for the country but also because of the stark reality that some people we know and love might not survive.

There are things we can all do. Social distancing is ok, self-isolating is a bit more difficult but we can do it – it seems, we must. Stories of selfish people attacking supermarket shelves like locusts are shameful, so too the rudeness to staff who are working to keep things going – it’s time to think about the needs of the wider community not just oneself. Our battle is against a shared, invisible enemy, not each other, and hopefully, we will be able to overcome it sooner rather than later.

Various posts I have seen on Facebook were summed up by Piers Morgan this morning, love him or hate him: we are not being asked to go into the trenches, we are being asked to stay at home. Our predecessors were asked to take up arms and fight for their country, often in faraway places and often without a return ticket. Others, like Ann Frank, lived, isolated, in hiding, for twenty-five months, and her release from behind the bookcase was not a happy one. Two world wars, each lasted for years, and the best and worst of people emerged.

At the weekend I read in the paper an article about a son who had managed to fill in the six-year gap in his father’s history. He had discovered that the quiet, modest French teacher he knew had in fact been a secret agent working for the SOE – a real hero. I was reminded of Simon Mawer’s brilliant book The Girl who Fell from the Sky (published in 2012 and not to be confused with the book of the same name by Heidi W. Durrow) and its sequel, Tightrope
.

Simon Mawer
The Special Operations Executive recruited people - often the most unlikely people - for their particular talents. Perhaps the most famous is Odette, whose wartime experiences and enduring of a brutal interrogation and imprisonment, were chronicled in books and a motion picture; she was one of the few to survive Nazi imprisonment.

Mawer’s books, however, tell the story of Marian Sutro, a smart, cool-headed young woman of French and English parents whose ability to speak French and whose propensity for risk, attracts the attention of the Special Operations Executive. Eventually, she is parachuted into occupied France as an allied agent before she is even twenty years old.

Having been approached and subjected to a series of oblique interviews, she volunteers for training. In a remote hunting lodge in the Highlands, she is taught how to send messages in code; to operate in enemy territory; to jump out of an aeroplane; to survive interrogation; and, most important of all, to kill. Marian is a good student and soon after her training is complete, she is parachuted into south-west France where she works with the Resistance. Life is surprisingly good at first, but when her task is assigned she must make her way to Paris, where the danger of discovery will be extreme. One of the circuits operating in the city has fallen apart, and she must take new radio crystals to its "pianist" (radio operator), a nervous, emotional woman called Yvette whom Marian met during her training. But she has a second mission, too. Before the war, Marian was in love with a young French scientist, a nuclear physicist called Clément, who is now of vital importance to her superiors. She must try to persuade Clément to join colleagues who have already fled to Britain and, if he agrees, she must somehow arrange his passage.


Also by Artis-Ann ...
Standing in Another Person's Shoes: Noughts & Crosses and To Kill a MockingbirdReview: Moonlight Over Mayfair By Anton du BekeReview: EBORACVM: THE VILLAGE By Graham ClewsReview: A Body In The Bookshop By Helen CoxReview: Secrets of the Singer Girls by Kate Thompson
Mawer manages to evoke a keen sense of place and time while maintaining an underlying tension throughout. How do you keep the truth from your nearest and dearest? Marian is given many names over the course of the novel - code names, aliases- and the real "Marian" begins to get a little lost, necessary perhaps, given she can trust no one – not even herself at the end.

Mawer blends fact and fiction in this moving and believable novel which includes love and betrayal as well as thrilling action. Marian is a convincing character in a tightly-focused plot and Mawer’s research has been thorough.

Set some years later, Tightrope invites Marian back into the world of espionage; this time it’s the Cold War and Marian is as fascinating and compelling a character as ever: her active service, her relationships, her beliefs and principles all combine to produce a singular creation - until finally, it is over, in what is a touching ending. Honestly, I devoured them both!

If you want to escape into the world of heroes who serve the nation at a time of crisis, then these two books are worth a read.