For many the name Jeep conjures up images of a large, capable 4x4 powered by a burbling V8 engine. Either that or soft top Wrangler, the origins of which date back to the Willys Jeep from the second world war. 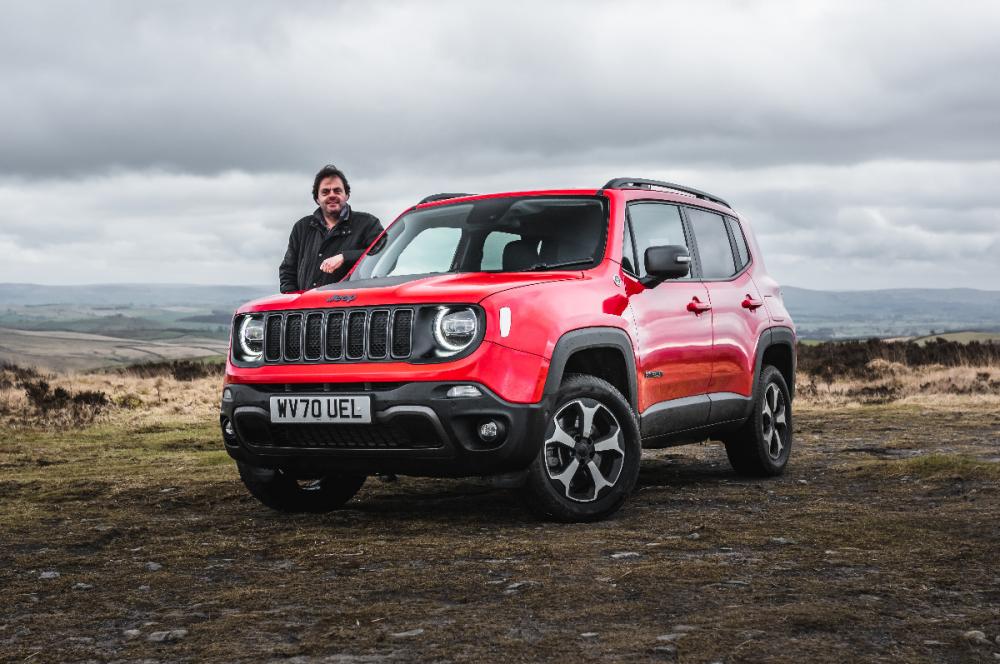 The Renegade on test here is an entirely different beast, especially so as the American company has now launched a plug-in hybrid version. In fact, it is the first PHEV from the Fiat Chrysler Automobile stable in Europe, though clearly a raft of other models will follow soon as companies rush to lower their ranges’ overall CO2 emissions.

The Renegade is a good seller for the brand, buyers being drawn to the outdoorsy appearance and genuine off-road capability. In a sea of bland SUVs, there’s no doubt the Jeep stands out from the crowd. 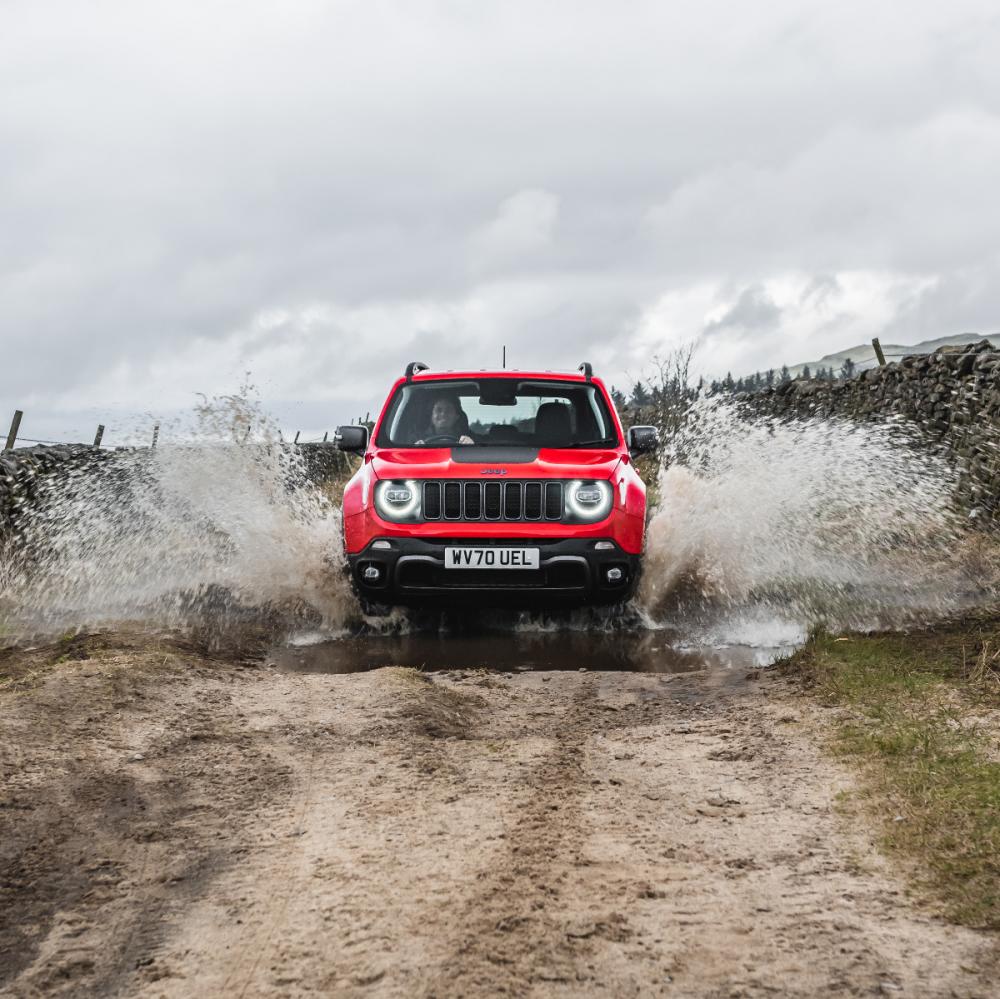 I have been fortunate enough to drive the Renegade in many guises both on and off road and it has been easy to fall for the car’s charms. So does this 4xe (I am told it’s pronounced 4 by e) version keep up the good work?

Under the bonnet sits a 1.3-litre turbocharged petrol engine, boasting either 130 or 180bhp in top-spec Trailhawk trim (as tested). This sends power to the front wheels, whilst a 60hp electric motor mounted over the rear axle sends power to the back. The result is a four-wheel drive system which does away with the need for a second driveshaft.

On paper, this all sounds like a recipe for sprightly performance and indeed a 0-62mph sprint time of just 7.1 seconds looks impressive. In practice it feels rather more sedate unless you are especially brutal with the accelerator. 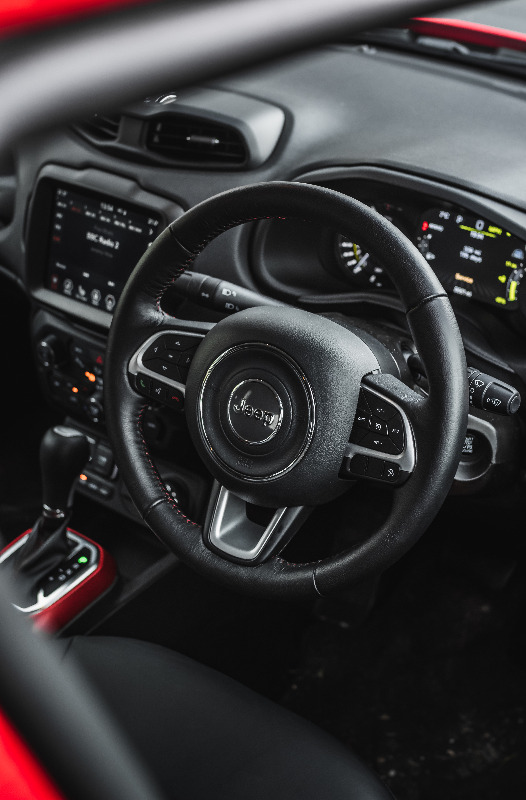 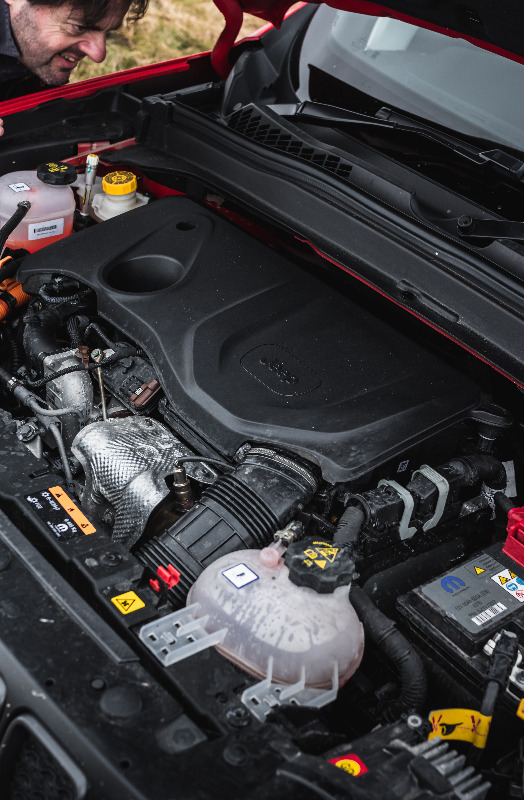 Left to its own devices, the Renegade will set off in electric mode and it can be driven up to 81mph without the engine bursting into life. Jeep claim up to 26 miles of electric only driving may be possible – expect nearer to 20 miles in the real world.

Charging can be done via a normal home socket if you are not in a particular hurry, though a home wallbox should be able to replenish the battery in around two hours.

The Jeep will always keep a small amount of charge in its battery and this will be constantly replenished thanks to regenerative braking. It is also possible to save the battery for the urban part of your journey, ideal as many city centres look to ban the combustion engine. 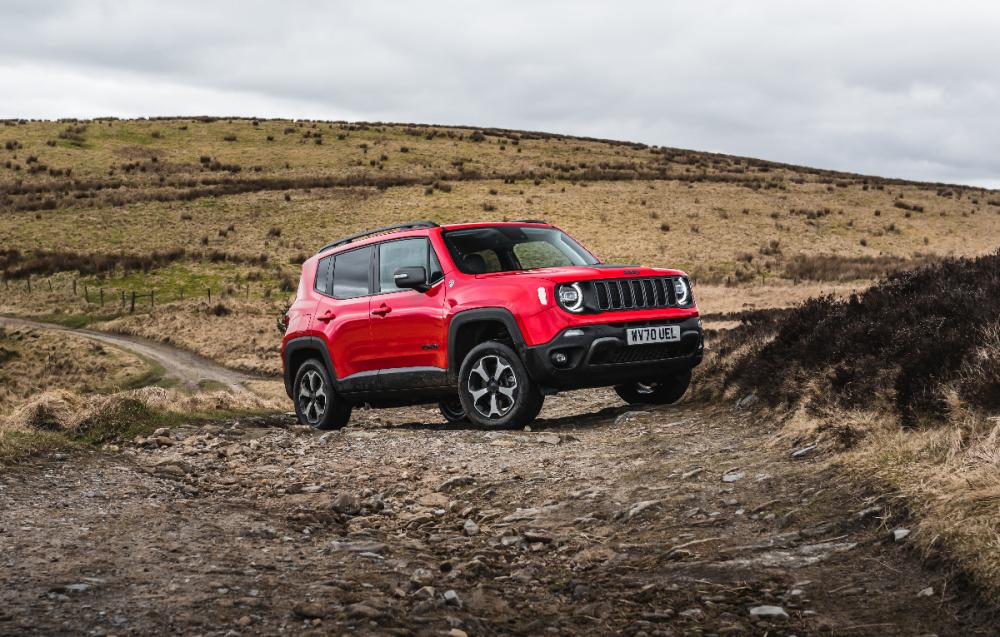 Drive is through a six-speed automatic gearbox and whilst changes are smooth enough, it does not like to be hurried. The latest generation of twin-clutch self-shifters are a lot snappier.

I undertook one longer journey during my week behind the wheel and once the battery has been depleted, the diminutive engine has a lot of Jeep to lug around. As such, the upper reaches of the rev range need to be regularly explored and the subsequent din is not especially pleasant, especially if you like to get a move on.

Higher speeds are also accompanied by plenty of wind noise, thanks to the Renegade’s rather blunt front end. 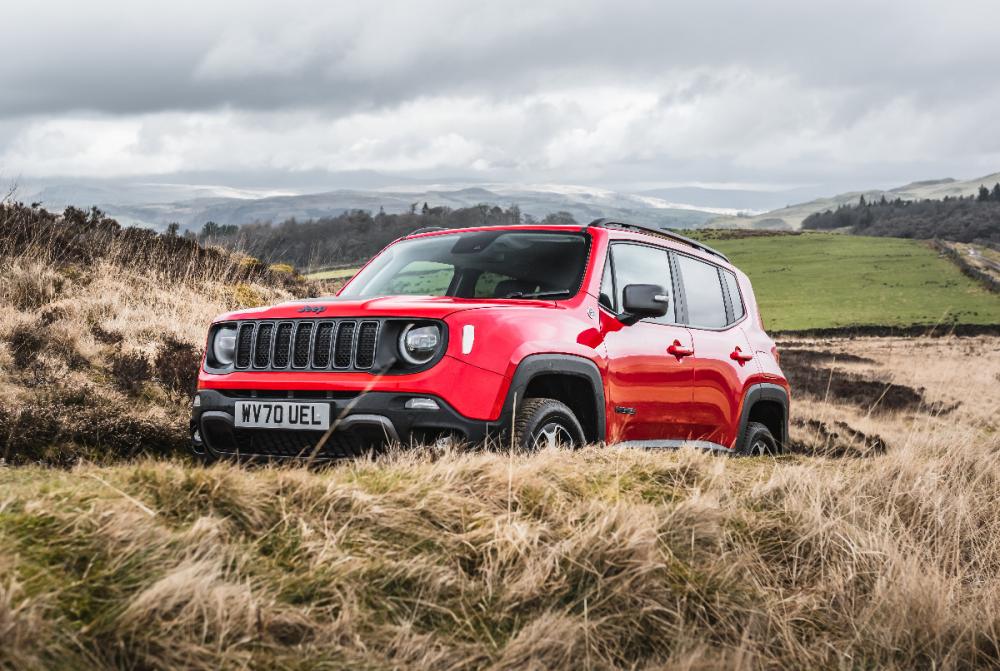 A standout feature of the Renegade 4xe is the ride comfort. The winter weather had done its worst and my local test routes were filled with a variety of potholes and craters. The Mud and Snow tyres have a generous side wall which helps, as I assume does the weight of the battery.

However, the downside is rather more body lean than is desirable. Best to reign it in and take life at a slower pace and then all is well. 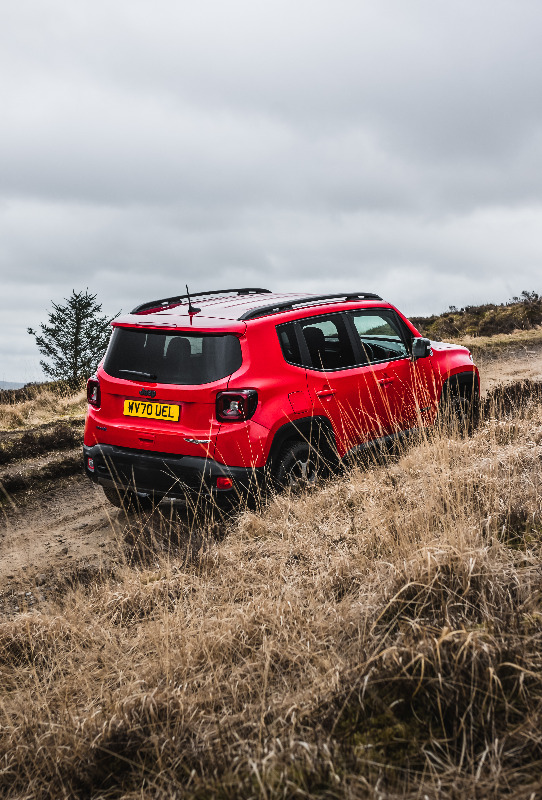 Emissions are impressively low as one would expect (51g/km CO2), but once the battery is empty, expect early 30s mpg. As is the way with PHEVs, you do need to plug them in as much as possible to gain the maximum benefit.

Jeep’s PR team do like to see their test cars returned suitably muddy, so with my photographer Will in tow (suitably distanced of course) I set off on an off-road adventure. Once again, the ride impressed. Traction was excellent, the Jeep coping with some fairly challenging terrain. Only a stop mid-way up a rutted hill for a picture caused any issues, but this was soon overcome with extreme use of the gas pedal.

We found some gloopy mud, a water splash and some marshy ground. The Renegade remained unfazed and impressed with its excellent traction. Only the lack of ground clearance would be likely to stop play if venturing into extreme conditions.

The Jeep’s interior is a pleasant enough place to spend time and the front seats proved to be comfortable even after many hours behind the wheel. It feels well put together though some of the materials used are shall we say utilitarian rather than tactile. There’s room for two average sized adults in the back and the boot is a reasonable size. 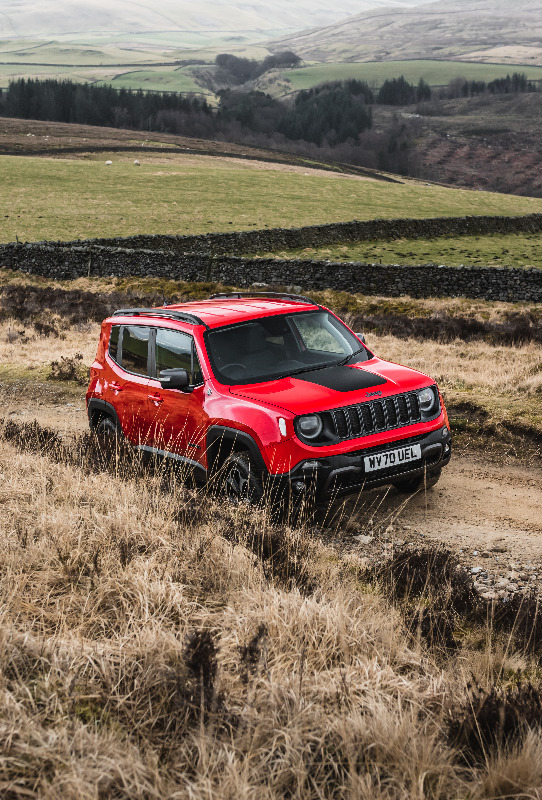 So, would I recommend the 4xe version of the Renegade? It is not a simple answer. If you are rurally based and have need for the car’s considerable off-road prowess and excellent traction, then yes.

Conversely, if you are an urban, low mileage driver with the ability to charge at home, then yes once again.

However, the Renegade 4xe is not a car for the high mileage driver or for someone who relishes a spirited cross-country blast behind the wheel, its uninspiring handling and refinement being below par.

So, the 4xe feels like a niche model and hard to justify at £38,100 as tested. The Renegade range does start at £23,400 and at this price point it all starts to make more sense. Is the PHEV really the one for you? 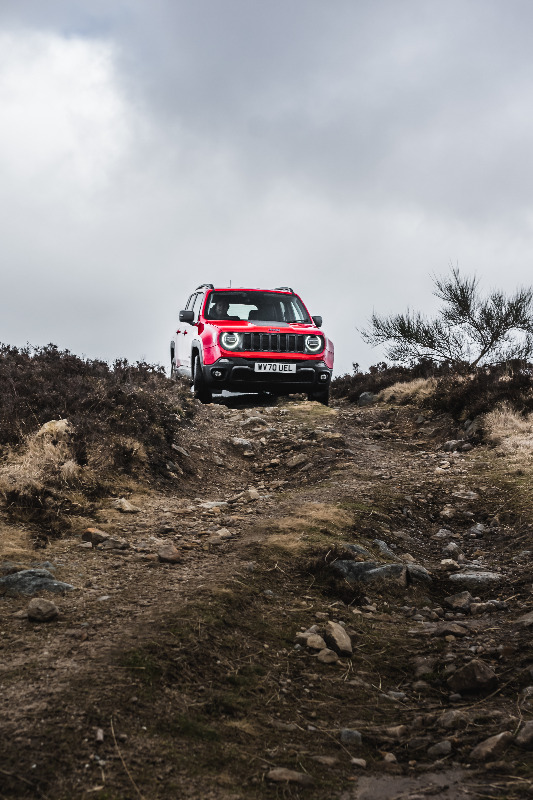