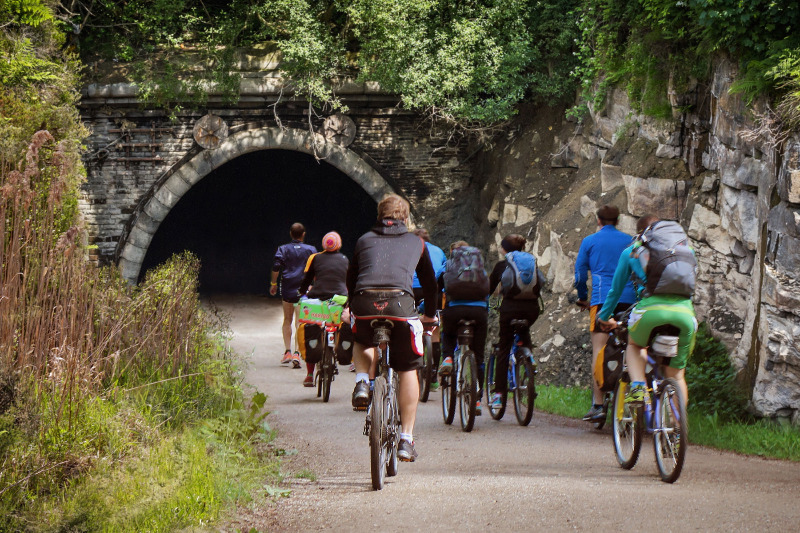 Cyclists at South Portal - photo by Queensbury Tunnel Society
Highways England has rejected Bradford Council’s request to pause plans for the abandonment of a disused railway tunnel whilst a bid to fund its repair as part of a cycle path scheme is considered by the Department for Transport.

In November, the West Yorkshire Combined Authority included Queensbury Tunnel in its submission to the Transforming Cities Fund for major transport infrastructure investment around the Leeds City Region. WYCA described the structure’s centrepiece role in a proposed Bradford-Halifax Greenway as a “significant opportunity”, providing a viable alternative for the 14,000 people who commute daily between the two districts, mostly by car. A study has suggested that the route would offer high value-for-money, returning £2.31 for every £1 invested in it.

Highways England, who manage Queensbury Tunnel on the Department for Transport’s behalf, have applied for planning permission to abandon it due to perceived safety concerns. However the proposal has met unprecedented opposition, with more than 5,200 objections lodged. Costs have escalated over the past year and are likely to exceed £6.5 million; in 2018, consultants working for Bradford Council costed the tunnel’s repair at £6.9 million.

Following submission of the Transforming Cities bid, planners asked Highways England for consent to push back the determination date for their planning application until 5th May 2020, by which time a decision on funding should have been reached. But Highways England replied that they were “not minded to agree to your extension request and ask that the Council now determine the application.”

Norah McWilliam, leader of the Queensbury Tunnel Society, said:
“As the TCF application makes clear, the Bradford-Halifax Greenway is an ambitious proposal which would improve connectivity for communities along that corridor, boost the local economy through tourism and fit with our obligation to address health and air quality issues. It also offers certainty for those living above the tunnel who are faced with the prospect of 88% of it being left to collapse if abandonment goes ahead.

“Rejecting the extension request is another inexplicable act by Highways England. If the funding bid is successful, they could be relieved of all responsibility for the tunnel, something the Department for Transport - as its owner - is keen to achieve. So why are they unwilling to create a little breathing space for decision-making? This attitude amounts to a bloody-minded refusal to look for a positive outcome.” 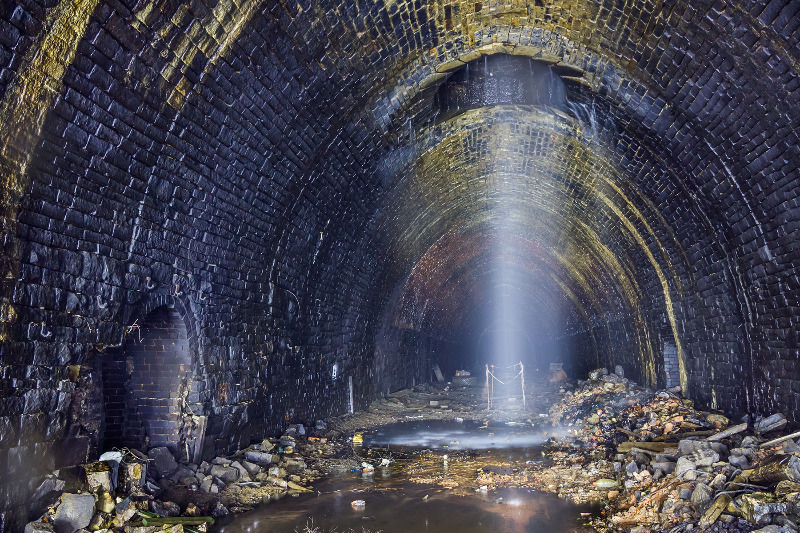 No 2 Shaft - photo by Forgotten Relics
Meanwhile, more details have emerged about the controversial infilling of one of the tunnel’s ventilation shafts in October 2019. The work relied on powers set out in the Town and Country Planning (General Permitted Development) (England) Order 2015 which were only applicable in an emergency threatening “serious damage to human welfare”.

Material obtained under the Freedom of Information Act reveals that a manager from AMCO-Giffen, the abandonment works contractor, emailed Highways England on 3rd October to describe the condition of a refuge in the tunnel’s sidewall, close to the base of No.2 Shaft. He listed a collection of defects including collapsed brickwork, cracking, bulging and mortar loss, all of which had been recorded in photographs of the refuge from 2016 and 2017.

However, based only on a text description, an engineer from Jacobs - who provide professional services to Highways England - concluded that “significant deterioration” had occurred. The potential impact of the refuge’s condition on the shaft was not assessed and, in any case, it did not form part of the shaft’s main support structure.

To help “defend the decision to infill Shaft 2”, the same AMCO-Giffen manager subsequently sent Highways England three brief extracts from an AECOM report about the tunnel, produced for Bradford Council in 2018. The extracts describe the development of minor defects at various locations through the 1.4-mile long tunnel which has seen no substantive maintenance for more than 60 years.

Graeme Bickerdike, Engineering Co-ordinator for the Queensbury Tunnel Society, said:
“The situation at No.2 Shaft had been known about for seven years and although some deterioration had occurred, it was gradual and didn’t come close to threatening ‘serious damage to human welfare’. If they were so worried about it, why hadn’t they implemented the repair designed by Jacobs in 2012?”

“The fact that they are scratching around for bits of evidence to justify their actions indicates the shaky grounds on which the decision was made. In an emergency, the evidence should be strong, abundant and unequivocal. This is yet another example of the abandonment team’s inability to assess and communicate risk in a reasonable, proportionate manner. The infilling of the shaft was entirely unwarranted.”

Bradford Council’s planning team have told Jacobs that they “do not accept that the recent works to Shaft 2 do not require planning permission” and that “the Council’s Legal Team will be writing to you separately on this matter”.