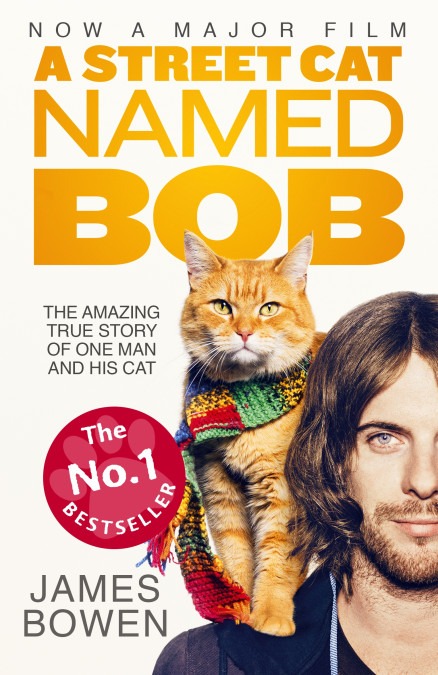 I had a cat once. I got him as a kitten, a little ball of fluff, and it was the vet who told me he was Harry and not Harriet! I had him for seventeen years. After the initial cute kitten phase, he was quiet, kept himself to himself and wasn’t particularly affectionate, except once when I was in bed with pneumonia and woke up to find him curled up under the duvet, in the small of my back. It was the only time he ever did anything like that and it was as if he knew I needed looking after. When his time was up and I returned from the vet’s with an empty cat basket, I didn’t expect to miss him, yet the house was strangely empty and I realised that he and I had shared an existence which had worked pretty well for both of us.

Things have a strange way of creeping up on you like that and I could understand the relationship between James and the intelligent and strangely intuitive Bob, in the true story of A Street Cat Named Bob. It was one of those books which has lived on the pile by my bed for a couple of years. I always intended to read it but something which I thought was better always seemed to worm its way to the top. So, with all this extra time on my hands, I picked it up at last. If you have a few hours spare - it won’t take long to read - give it a go; it’s charming, simply written and heart-warming.

James is a busker. After what he saw as a difficult childhood as a frequent victim of bullying and moving between England and Australia, he became an angry and rebellious teenager. He succumbed to drug-taking, lived on the streets of London (cue for a song?) and when the story opens, he has pretty much lost contact with his family, is living in sheltered accommodation and busking to make ends meet. He finds Bob, a ginger tom who is somewhat the worse for wear. James can only just survive on the meagre amount of money he makes, so the decision to be a full-time pet owner is not one he takes lightly. He is quickly rewarded, however, when a relationship develops between the two as each puts his faith in the other. 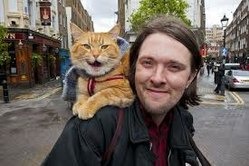 James Bowen & Bob
Each seems to have a past filled with problems but together they rebuild one other’s lives. Bob enters James’ life but unlike dogs, cats cannot be trained. Dogs are (Wo)Man’s best friend, cats have staff – they choose their owners. This book is really about a cat and his human.

Addiction is not easy and the path James chooses to get clean is a tough one to follow. As living, breathing creatures, pets are a responsibility and provide both a focus and a routine. His commitment to Bob, having another creature to think about, first nursing him back to health and then adapting to accommodate him, help James.

As a cat lover, and given the title I expected the book to be more about Bob than it is, Bowen gives an authentic account of street life, of the difficulties faced when busking or selling the Big Issue, and only confirms what the reader intuitively understands, that people like him are often thought of as invisible. Bob is transformative, and by providing companionship, he helps James to find an identity and a new direction, encouraging the reader to see preconceived stereotypes in a different light. And you don’t have to be a cat lover to appreciate that.

This autobiography is not great literature. Bowen is not a great writer. Technically speaking, it is not particularly well-crafted, but it is a powerful story and it does give the reader an understanding of people that many of us would choose to avoid; for that at least, it deserves praise. It’s a book about how people can completely turn their lives around given the opportunity: hope, friendship and getting another chance. A Street Cat Named Bob is well worth a read.

A Street Cat Named Bob is published by Hodder & Stoughton.


Also by Artis-Ann ...
Review: Heads You Win By Jeffrey ArcherReview: The Litigators By John Grisham‘Things Are As They Are And Will End As They Must’: A Brief Affair By Margaret Leroy'You're My Favourite': Jane Eyre By Charlotte BrontëThere's Nothing Wrong With Being Eclectic