Those who know me could tell you that I don’t like boxing, I hate bullying and am not entertained by stories about violence or horror stories with carnivorous monsters, and yet, in this age of strange enlightenment, I broadened my horizons and gave this new novel a chance. I read it in three sittings and found it compelling. I could not predict the final outcome but I found myself caring for the main character, Tony.

The death of a parent is difficult at any time but when you are a teenage boy, whose mother died when you were two, your father’s death packs an altogether meaner punch. And that is how this book starts. Set in a rundown area of Hull where life on a good day is not easy, father and son have prepared for the inevitable outcome of the big C, but when reality strikes, the grief process is not something that passes quickly and things don’t go exactly as planned.Fifteen-year-old Tony knows he’s on his own despite offers of help from friends, neighbours and a well-meaning social worker.

Life for the orphan, Tony, is vividly and realistically described as he determinedly tries to overcome his grief and goes through the motions of surviving at home alone: cooking, cleaning, washing and the rest of an unfamiliar domesticity. Tony finds a variety of routes, at first, forging an unlikely alliance with his neighbour, trading favours which neither can reveal to anyone else – it’s not sex! He meets Mwamba , the Congolese ‘see-far’ woman whose life he saves and, down at the boxing club where he trains like his father before him, he talks to the old coach, Jacko, who promised his dad he would ‘look out for the boy’. 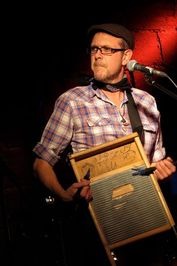 Chris Speck
His father has left him a series of well-intentioned short videos - advice for life - which Tony watches at intervals, choosing carefully which and when. He quickly becomes embroiled in unlikely yet believable plots as he tries to steer his new and unfamiliar course. The boxing club is bought out by the dubious Liverpudlian, Wallace, who is always accompanied by his menacing henchman, the unlikely-named Whalebone. Fixed fights, illegal drugs and pain are just some of the sinister, though credible, twists and turns which develop; the violence you might associate with a boxing club in the poorer end of town, becomes real - and not just in the ring. I even enjoyed the detailed descriptions of the fight scenes and saw boxing with all its technique and tactics, in a new light, though I still have no desire to watch a bout for real.

Always in the background is ‘the beast’ as the plot combines the boy’s interest in the local boxing club with the legend of The Beast of Barmston Drain – well known around Hull. Read it as you will. Wild dog-wolf or something more. An understanding seems to develop between Tony and the creature and with each appearance, there seems to be a greater meaning to its presence as the metaphor is developed: ‘In the darkness, the animal must be as scared as he is, as hungry as he is, lonelier, perhaps as unsure.’ Its presence adds a deeper dimension to the novel, leaving questions unanswered. ‘I know who you are,’ Tony says to the beast, but the reader is left to work it out for themselves and each may come up with a different answer.

The ending is perhaps a little over dramatic – but something had to happen. Tony decides he has to find his own way in life, make his own decisions, and his actions provide a sense of (rough) justice – in some ways at least. Ultimately, it is a tale of loss and survival and the reader feels for the boy who leaves the heartfelt message for the social worker at the end when he at last admits he can’t do it alone.


Beast is available at Amazon


Also by Artis-Ann ...
'You'd Better Get Yourself Off Then, Pet': The Seagull By Ann CleevesThe Bonds That Define Us: And The Mountains Echoed By Khaled HosseiniOf Mice And Men By John SteinbeckReview: The Girl From The Hermitage By Molly GartlandReview: The Guardians By John Christopher