Caro Emerald
Wisely chosen to support Caro Emerald on her Emerald Island tour is Irit. Irit Dekel left her native Tel Aviv in 2015 and came to London to follow her musical dream.

The set up on stage is simple: acoustic guitar, accordion and Irit's clear vocals to let her songs shine through. Bathed in red lighting she opens up her 30 minute set with the joyful, Just Because. A memorable uplifting track which is a good introduction to her music.

A mix of jazz and pop influences intertwine throughout, although there is a Latin vibe flowing through tracks like Breathe Out. Vocally there is a hint of Lily Allen present and you can't help feeling that she would be perfect to appear on Later.. with Jools. 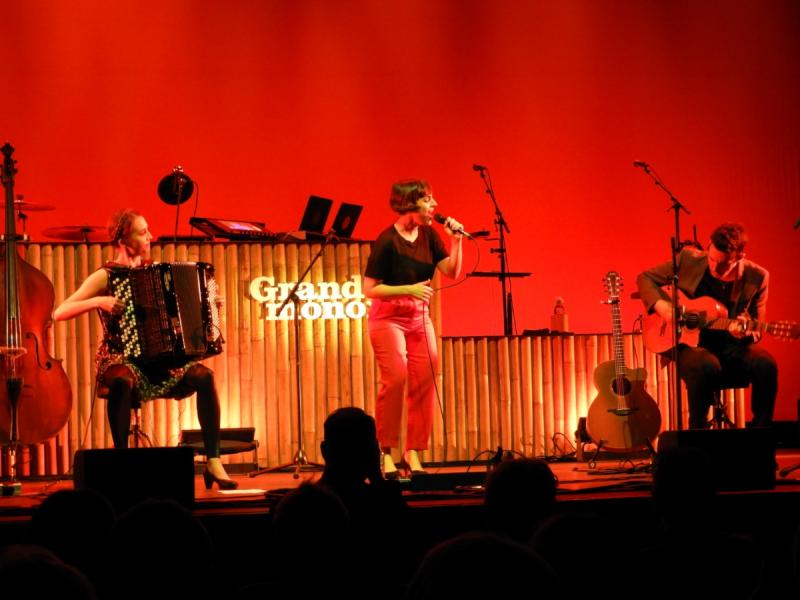 Irit Dekel
As her short set goes on she becomes more at ease on stage, closing with a cover of the R.E.M. hit Shiny Happy People.Judging from the amount of appreciative applause she received as she left the stage, she made a lot of people happy tonight.

Caro Emerald has just released her Emerald Isle EP so it is not surprising to see the stage set tries to transport the Harrogate audience to a tropical paradise.

"I hope those seats are not too comfy, I want you to have a party tonight and dance" she says, as she entices her Yorkshire fans to enjoy the gig.

The big tracks then follow like Back it Up and Tangled Up. It helps too when you are backed by a very competent 7 piece band including 2 excellent percussionists.

Charming, assured and confident she wore a black dress that showed off her baby bump.


Caro Emerald
Her initial success arrived in the rest of Europe before the UK discovered her, but it now seems like we have always known her.


Also by Graham Clark...
Interview With FiveGary Barlow Relights The Fire In SheffieldThe Offspring Let The Good Times Roll In LeedsJames - Still Getting Away With It At Leeds ArenaSam Fender – On Fire In Leeds
With the new EP to showcase she leaves the stage as the instrumental Tahitian Flies is performed by the band. She returns with a rose in her hair to perform Tahitian Skies. The Ghost of You, a haunting ballad off the new EP drops down the vibe.

We are all invited then to Emeralds Bar and Club as the mood uplifts and the audience are up on their feet for Liquid Lunch and That Man. She jokes that the Harrogate venue reminds her of a cinema. If it was then this is a first rate movie we are watching.

It felt like it was over too soon, but she is soon back on stage for the encore. A Night Like This is probably one of her best tracks whilst the new single Watchagot has a more urban feel to the song. It is a number that will appeal beyond her core audience and broaden her appeal.

As the band group around the front of the stage, Emerald salutes the audience with a wave. Probably the best concert so far in Harrogate this year.