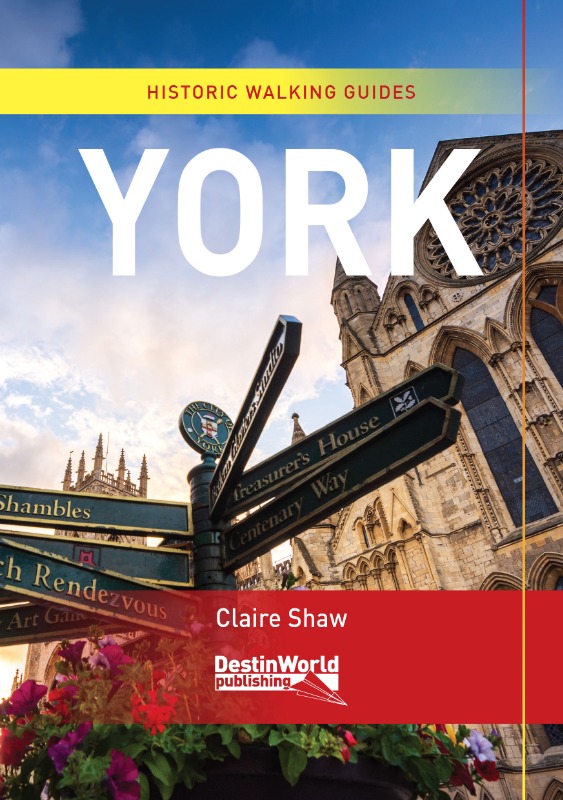 Well, yet another departure for me, this time, to review a tour guide, but this is certainly an interesting one, appealing as it does to my love of history.

How little we appreciate the world around us. Walking far more, as I have done during lockdown, I have discovered among other things, where the Workhouse was in Harrogate, where Florence Nightingale slept and the associations Agatha Christie had with the town, all by reading the little blue or brown plaques I have previously ignored or not even noticed.

We take for granted the area we live in, and it’s good sometimes to adopt a slower pace and become more aware. Just looking up at the architectural skyline can be an education and an aesthetic joy.

I have long enjoyed days out in nearby York. It is a place I have wandered round, often aimlessly, on many occasions; the walls, the gates, the narrow streets are a delight but next time I go, it will be with Claire Shaw’s new walking guide. No need for gaudy orange umbrellas or gawky student guides dressed in macabre outfits. Whether you are a local or one of the millions of visitors York hosts each year, this book offers you everything you need to know, to walk round the city at your own pace, and perhaps to see it afresh. 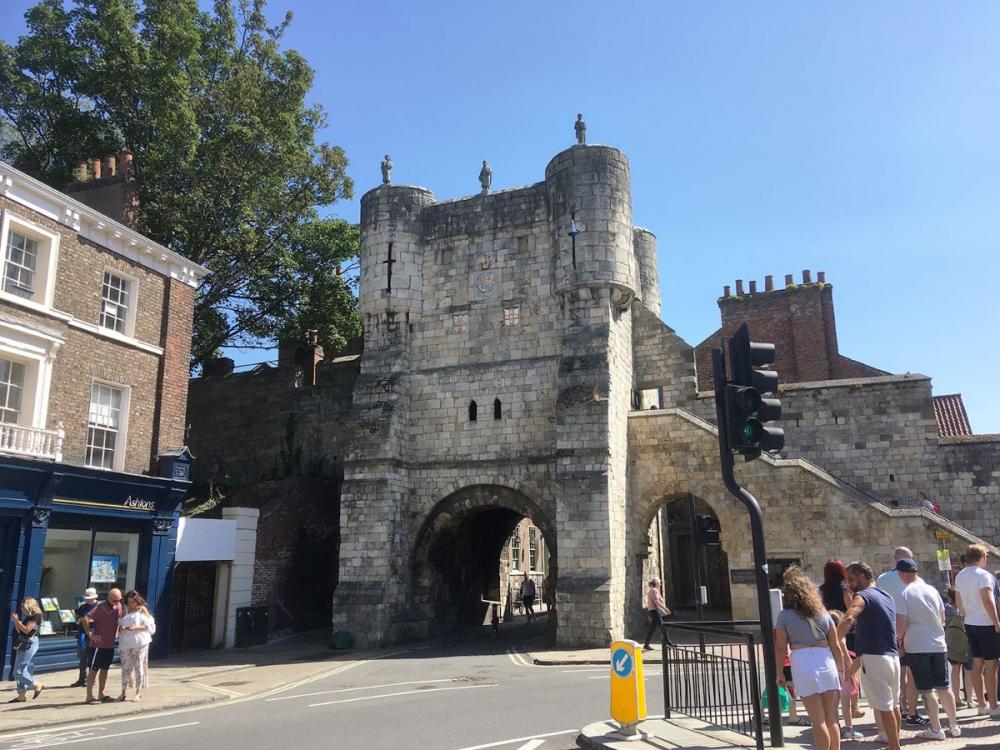 Bootham Bar from Exhibition Square
The themed routes are easy to follow. There is a map for each and a prose guide, with plenty of landmarks to keep you on the straight and narrow - though one or two signposts refer to modern shops which may or may not still exist this time next year. The useful website addresses listed will fill in finer detail for those who want to investigate a particular subject further.

York is bathed in history, and if you have a curiosity about the past, this guide provides you with all the detail you could want as you stroll through the different periods. The Romans built bathhouses, gateways, temples and sewers and evidence of them all may still be found – if you know where to look.

Built on top of the Roman town, was medieval York with its guilds and river trade and the importance of the Ouse is made clear. During the Norman invasion, William the Conqueror used the city as his base while he ‘harr[ied] the North’ and in Georgian times, York enjoyed a glamorous period as it became the social capital of the north, although travellers between London and York had to endure the rising numbers of highwaymen too.

Then, there are walks tracing the history of Christianity. Whilst we all think of the majesty of York Minster, there are numerous other buildings of devotional significance, of which Daniel Defoe wrote, ‘if it weren’t for The Minster…would have been considered extraordinary in their own right’.


St Mary's Abbey
The tour guide takes us through the centuries right up to the advent of the Terry and Rowntree chocolate empires which have seen York through some difficult times. Did you know that their apprentices were Cadbury and Fry? All familiar names.

A walk round the walls and through the gates is enhanced with plenty of historical detail. The spikes which once held putrefying heads hearken back to more brutal times, and we learn of the unexpected controversy surrounding the walls in a slightly more modern context. The motte and bailey design of the castle is alluded to and will reawaken the memories so many of us have of school history lessons. The snickelways and cobbled streets which wind their way through the city, in contrast to the straight lines of the Roman roads and pathways, take on a more endearing, old world charm when described in this book.

Language lovers will appreciate the derivations of street names from Old English, Latin and French. Bitchdaughter Tower and Grape lane are two I’ll let you look up for yourselves but who would have guessed that York once had a flourishing red light district? Even the Shambles, quaint as it now is, was once home to thirty butchers or more and reeked with the stench of blood and flies. J.K. Rowling was inspired by the Shambles when she created Diagon Alley in her Harry Potter books and the recent television series Gentleman Jack was partly filmed in York, for the sake of historical authenticity.

Also by Artis-Ann ...
Review: The Hidden Hours By Sara FosterKnow Your Enemy: Living Better By Alastair CampbellHearts Of Darkness: Lord Of The Flies By William GoldingRevenge Is A Dish Best Served Cold: The Racketeer By John GrishamA Different Perspective: The Other Side Of Truth By Beverley Naidoo, Stone Cold By Robert Swindells
Without realising it, many of us have been treated to views of this wonderful city: most are referenced in this guide, along with familiar names such as Charles Dickens, W. H. Auden, the Bronte sisters, Kate Atkinson, Wilkie Collins, Dick Turpin and Guy Fawkes. Read it to find out how all are bound up in the history of York.

Read it also to discover the dramatic fate of lesser known characters such as Margaret Clitheroe, and on the ghost walk discover why Roman soldiers have been seen marching on their knees. There were executions aplenty to colour York’s past and the spirits won’t let you forget.

Something for everyone - there is even a pub walk but I defy you to manage a pint, or even a half, in every one - this guide would lend itself to a television programme, perhaps one walk each week – I can picture it now.

I thought I would just dip into this book but found myself engrossed and now look forward to ‘walking the walk’. My only criticism - please don’t ask me to walk past Betty’s tea room!