Life eh? What an effort. 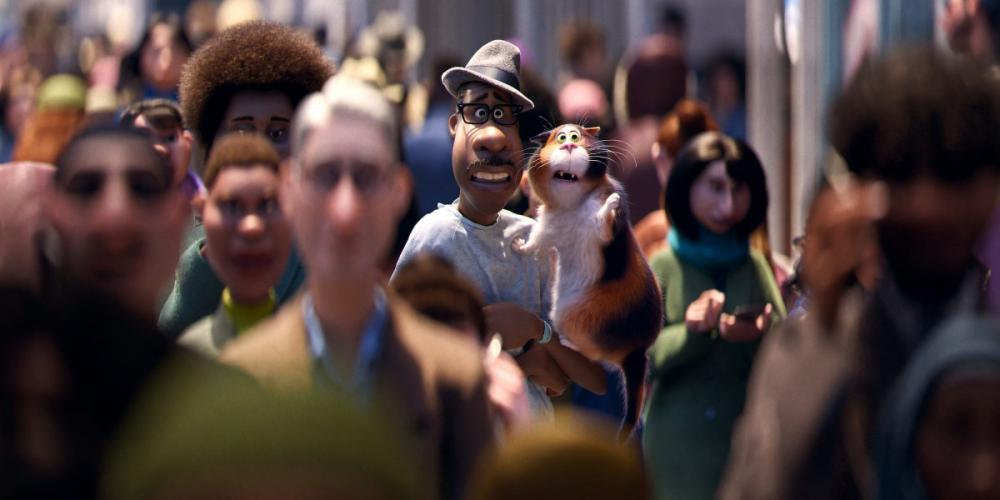 As we have not long since ended one of the worst years in recent memory, it is not hard to see why many of us have lost a bit of our lust for life. But trust the mighty talents at animation studio powerhouse Pixar to try and re-ignite that passion with a film that is both emotional and uplifting, and truly something to see and feel.

The story concerns enthusiastic music teacher Joe Gardner (Jamie Foxx), who receives the break of his life by getting the chance to perform with one of his jazz heroes on stage. But on the way home he falls down a manhole. Awakening in the 'Great Beyond' as his soul is heading towards the light, Joe cannot let this be the end, not when he’s so close to his dream, and so must find a way to get back to his body on earth, with the help of a rebellious unborn soul known as 22 (Tina Fey), who he meets in this vast other world known as 'The Great Before' which takes him on an eye-opening journey.

Even before Pete Doctor and Kemp Powers’ film kicks in with its spiritual adventure concept, Soul already feels honest and real. Much has been made (quite right too) of the fact this is the first African American lead protagonist in the studio’s history but this inclusive story is one that speaks to our very humanity as one, at a time when it is most fulfilling being reminded of the joys of being alive. Reminiscent of their similarly themed Inside Out, Soul manages to far surpass that particular film on every level. No easy feat.


Also by Jack Bottomley...
Review: Framing Britney SpearsReview: Blithe SpiritReview: Wonder Woman 1984Review: UnhingedReview: The New Mutants
The animation is simply stunning and a further advancement of Pixar’s ever amazing and developing CGI graphic work. You can literally see the sweat glistening down the faces of the jazz musicians as they play onstage, lost in their musical passions.

Not only does the film present the every day so beautifully, but also captures a thriving after (and pre) life. The sequence where Joe’s soul escapes his movement towards 'The Great Beyond' and finds himself in the 'The Great Before' (where young souls are taught before starting their journey on earth), sees Pixar experiment with numerous visual styles and transfix you with the breathtaking results. Put this next to Trent Reznor and Atticus Ross’ emotive score, and this film aesthetically holds hands with Doctor, Powers and Mike Jones’ moving screenplay, creating a tear-jerking and affirming treat for the whole family. As well as crafting one of the most visually engrossing, touching and human scenes in Pixar since the opening of Up and the incinerator sequence of Toy Story 3.

Boasting adventurous playful thrills, hilarious moments (especially surrounding a therapy cat) and constant sharp and witty dialogue, the film also comments on the nature of life that really will hit home with many viewers, Soul is the real deal. Foxx is brilliant in the mature and deep lead role, matching up well alongside the increasingly joyfully child-like (if initially rebellious) Fey. Some scene-stealing voice work comes from the likes of a wise Angela Bassett as respected jazz musician Dorothea Williams, an always hilarious Richard Ayoade as 'Great Before' counsellor Jerry, an understanding Alice Braga as another counsellor, and a cool Graham Norton as Moonwind - a spiritual street corner sign twirler.

Soul is a flooring work from Pixar that I would rank up with some of their best work. At this moment in my own life, to watch something like this was quite a moving and incredible experience. I'd have loved to see it on the big screen but despite its home now being Disney+, Pixar's rich, powerful and indeed soul-ful film taps at your heartstrings like piano keys, and is a beautiful and rewarding watch.