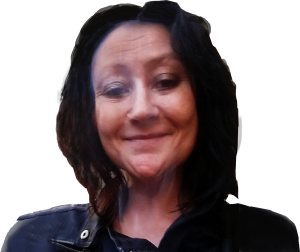 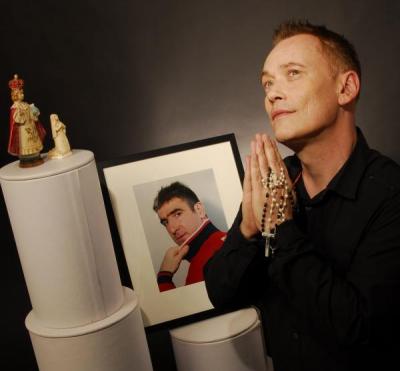 This was my first time to the Square Chapel, Halifax and my first introduction to Terry Christian live. He's a man I feel I already know, having been hit hard at that passionate age of seventeen with the Madchester music scene and the chaotic and revolutionary TV show 'The Word', that we watched as religiously every Friday as a Catholic does... well, whatever a Catholic does.

But I don't think I was the only one who felt that way. Terry is someone whose personability, honesty and lack of pretension creates an easiness and familiarity. The intimacy of the venue helped.

A recovering Catholic myself, I found the opening vision of Terry in the role of an Irish nun both hilarious and eerily disconcerting, and the audience audibly could relate to Terry's tales of the treatment he endured as a child from inner city Manchester attending the 'posh' Catholic school. The humiliation he was subjected to from nuns, family and his neighbourhood mates was turned into comedy, where going to the library was a sin that would warrant a beating from the local hard nut, yet at school he felt a need to deny his parents' true occupations and even the area where he lived, upgrading it from Old Trafford to Chorlton.

His opinions on class and his 'Northern-ness' have probably been spouted more by others than himself but there's no doubt that his experiences with the snobbery and elitism of the media have profoundly affected his views. His background is truly multi-cultural. His lifetime has encompassed all walks of life but he's known for being Northern and the stereotypes that go with it. Stupid he is not, thug neither. Stubborn, I'd hazard a yes.

Encouraged/forced to go to the laughably named 'voice training' lessons early in his career, (Terry put us straight on that - they were elocution lessons - needless to say he didn't keep them up), he was not for changing and arguably led the way for regional accents on mainstream TV, risqué television shows and a dedication to music that has been the staple of his life. His career achievements shockingly overlooked by a system that, thankfully for us, can't get rid of him.


'bitter sweet entertainment'
The question and answer session following the performance revealed the cheeky Terry responding to the cheeky questions, regarding his earnings, his time on The Word (no he didn't have a fight with Mark Lamarr, and great answer to whether he felt out of his depth on it - "did I look like I had any f***ing training?") and subsequent reality shows. He dealt with them all with good humour, seemed more relaxed, and demonstrated that great ability to take the proverbial out of himself - "Have you seen the sh*** I've done on TV since?"

Of course you didn't have to be a recovering Catholic to identify with the incredible tales of his life. It was bitter sweet entertainment. Humorous, blunt, painful and rude all delivered with the directness you'd expect from the man who has been slated by the media for everything from his accent to his outspoken views.

His directness has caused him problems, but it's his integrity and approachability that has bred his fans. And that's what we got with this performance.

Chip on his shoulder? Didn't spot it. Too comfortable, easy to watch, intelligent and funny for that.

A great night out.