Review: The Assassin’s Cloak – An Anthology Of The World’s Greatest Diarists Edited By Irene And Alan Taylor 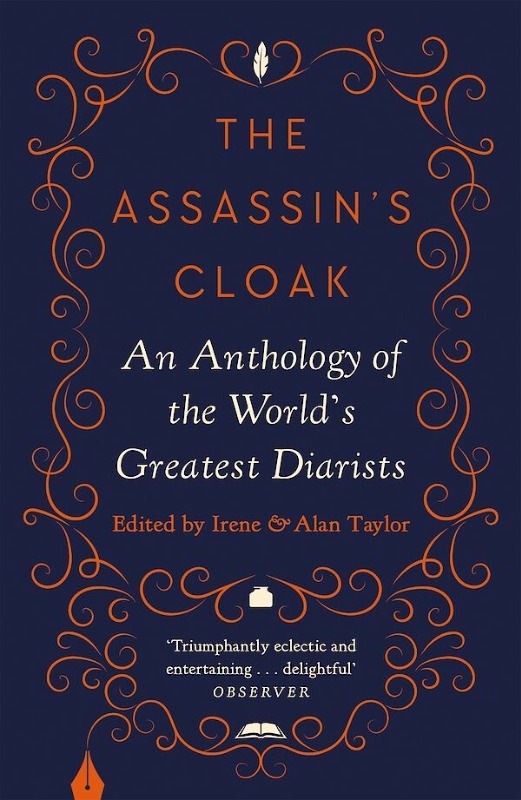 Gwendoline in Oscar Wilde’s The Importance of Being Earnest says, ‘I never travel without my diary. One should always have something interesting to read on the train’. One imagines that fictitious diary would be nothing less than amusing, even if its author’s judgment is a tad blurred! Leading an interesting life or keenly observing the machinations of others as they lead theirs, can be wonderful material for a diary. Likewise the authentic ruminations, cogitations or whimsies of any individual in possession of a pen and the facility to express themselves succinctly with lucidity, perspicacity and personality.

Diary entries can be unremittingly sincere, scintillatingly intimate, intensely poignant and even revelatory. They can reflect the banal and the historic, whilst ranging to the philosophical or the hysterical. Distilled through the idiosyncratic prism of their author, such entries can be cathartic outpourings or quasi- autonomic musings reflecting both conscious opinions and subliminal truths. Phraseology, choice of content and emphasis may reveal the emotional or psychological hinterland of the diarist, or simply capture an authentic response to a particular event, simultaneously shedding light on the observer and the observed.

Diary keeping facilitates granular individual introspection, the broader examination of coterminous societal zeitgeists and the events shaping them. Both of these co-existent realms are rendered subjectively, not objectively. Diaries provide an opportunity for an individual to commune not with others, but with themselves.

From the Latin ‘diarium’ meaning daily allowance, ‘dias’ meaning day, the earliest use of the word was in Ben Jonson’s Volpone (1605). Marcus Aurelius kept something approximating to a diary in the 2nd century AD, as did the 9th century Chinese scholar Li Ao. Like the 11th century travelogue kept by Ibn al-Banna, Li Ao wanted to record his personal travels in the form of a daily record, however the former’s diary was the first to be arranged in date order. The anonymous ‘Journal d’un bourgeois’ covering the years 1405-49 evinces a conscious attempt to capture personal opinions not for public eyes. The Florentines, Buonaccorso Pitti and Gregori Dati are fine examples of this Renaissance predilection.

We have to fast forward to Samuel Pepys (1633 -1703) to find the first recognisably modern diary of note and this was not published until 1825. His contemporary, John Evelyn, also kept a notable diary and one which remains an important primary research tool for understanding the English Restoration period. This remarkable work contains eyewitness accounts events of enormous historical significance such as the Great Plague of London and its Great Fire. The posthumous publication of diaries begun in the 19th century and includes The Grasmere Journal of Dorothy Wordsworth, published in 1897, and the diaries of Henry Crabb Robinson, which were published earlier in1869. Perhaps one of the most famous posthumously published diaries was that of Anne Frank, The Diary of A Young Girl, capturing her experience of hiding from Nazi occupiers in Amsterdam in the 1940s.

Since the 19th century, the publication of diaries by their authors has become commonplace, especially amongst those with an axe to grind or a score to settle. The late 20th century saw a rash of published political diaries, notably those of Tony Benn and Alan Clark. The arts saw luminaries within the cultural pantheon also publish their diaries and these include those written by James-Lee Milne and Peter Hall. Carl Jung, Anaïs Nin and Aleister Crowley all kept diaries as acts of conscious self-exploration. Literary figures of note who kept such diaries were Franz Kafka, Paul Léautaud and Diary of Divine Mercy In My Soul, written by Saint Faustina, which exemplifies this self-reflective purpose.


Also by Paul Spalding-Mulcock...
‘Fate Brings People Together No Matter How Far Apart They May Be’: We Are Animals By Tim EwinsInterview With Penny Batchelor - Author Of My Perfect Sister'Once The Dead Girl's Sister, Always The Dead Girl's Sister': My Perfect Sister By Penny BatchelorReview: All The Sonnets Of Shakespeare - Edited By Paul Edmondson And Stanley WellsInterview: Louise Fein, Author Of People Like Us
From 1820 until 1850, the publication of diaries was big business. During this epoch authors began using diaries to form the narrative structure of their novels. Samuel Richardson’s Pamela (1740) was an early example, with Emily Brontë’s Wuthering Heights (1847) being a manifestation of this creative trend. The stationery company Letts did a roaring trade in large formatted diaries, advising their customers to ‘Use your diary with the utmost familiarity and confidence. Conceal nothing from its pages nor suffer any other eye than your own to scan them’.

With the above in mind, reading another’s diary is clearly a potentially wonderful diversion, as illuminating as it can be transportive, unsettling or even profoundly moving. That said, even the most insightful of literature’s luminaries can produce variegated affairs. Unabashed scoundrels can have a less than scandalous day in the office and history’s most mesmeric personages may reflect a dull day in a less than rapturous journal entry. Selecting the diary of a specific individual to peruse may have the unfortunate corollary effect of not allowing one sufficient time to experience the creative mind, frankness or individuality of another. Additionally, with so many voices to listen to, where does one start ?

Imagine, though, if an anthology existed which extracted its contents from the diaries of 170 of the world’s most captivating diarists and drew upon the daily thoughts of such an extraordinary collection of colourful people from the last 300 years. Imagine if such a book populated each and every day of a calendar year with selected gems from personal diaries of characters as diverse as Kafka, Virginia Woolf, Noel Coward, Charles Darwin ,Queen Victoria, Josef Goebbels and Evelyn Waugh, to name but a handful of contributors. Consider the hours of joy such a book might provide, especially if it also included the intimate musings of Earl Mountbatten, Siegfried Sassoon, John Ruskin, Steinbeck and Sir Walter Scott and Leo Tolstoy.

There is no need to imagine such a gem. It exists already !

In its twentieth year of publication, The Assassin’s Cloak, An Anthology of the World’s Greatest Diarists is that very book ! Edited by Irene and Alan Taylor, this 700 page treasure trove contains over 1800 selected private entries harvested from the original diaries of its contributors, each presented on a day and date determined by our beneficent editors. ‘All the diarists have been published commercially, whether or not that was their intention…Diverse nationalities, ranging in date from the seventeenth century to the present day.’ So says Alan Taylor in the book’s introduction.

Taylor tells us that ‘All human life is here’ and that ‘here be cads and countrymen, wits and drones, neurotics, nymphomaniacs and narcissists…All contributed to the mosaic that is life’. However, each entry has a common root in being chosen to reflect one criterion: ‘The overriding principle of inclusion was enjoyment’. The hedonistic calculus Taylor is referring to is the propensity each entry included in this fabulously engaging anthology has to please the modern reader. Our editors have exquisite judgement, a faultless instinct for metaphorical diary gold and above all, they have assembled an anthology of diverse voices guaranteed to pique the interest of any reader and undeniably delight all. Lesser names sit alongside the infamous, the famous and the intellectually, morally, societally significant. Even Adrian Mole has an entry declaring his resolve to ‘stop thinking erotic thoughts during school hours!’.

This is a book which can be dipped into on an ad hoc basis just for satiating momentary pleasure or it can be read in large, deliciously entertaining chunks. Perhaps the best way of engaging with its almost indescribably magical ability to allow any reader first hand access to the minds of its contributors, is to read it on a daily basis in chronological date format. A year’s worth of bite size gems, all independent yet in some ineffable way forming something akin to an insight into the very nature of being human. Either way, the book comes complete with a very brief Introduction, a comprehensive set of biographies for each of its contributors, and an equally enriching Index Of Diarists. One book, a multiplicity of uses and a work destined to be seldom out of the hands of those lucky enough to own a copy.

Christmas is nearly upon us. If I had been a good boy and did not already possess my own copy of this utter marvel, I would be writing a letter to Santa forthwith! Whether a personal indulgence or a gift likely to be much cherished, The Assassin’s Cloak is a book I cannot recommend highly enough. Our generous Editors should be extremely proud to have assembled such a captivating, thoughtful and enjoyable anthology. I might not keep my own personal diary, but I’m rather grateful that the Taylors’ have given me the chance to read the personal thoughts of people incalculably more interesting and undeniably noteworthy than me !


The Assassin’s Cloak – An Anthology of the World’s Greatest Diarists, edited by Irene and Alan Taylor, is published by Canongate.