Review: The Guardians By John Christopher 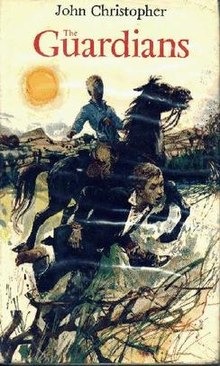 Front cover of first edition
I first read this book with a class of Year 9 students in the mid-eighties – it was the only one left on the stock cupboard shelf – and was I glad! I have read it numerous times since and still recommend other John Christopher books, too, particularly, The Prince in Waiting Trilogy, although others might prefer The Tripods. Christopher’s books are thought-provoking, subtle and with a twist at the end - well worth waiting for in their exploration of the theme of conditioning and the value of free will, and more than just teenage fantasies.

The Guardians is set in the year 2052 and presents a subtle dystopia (always a popular theme) which is viewed from the point of view of the male teenage hero, Rob. Most of Christopher’s books have male teenage heroes – make of that what you will, it doesn’t detract from the book as far as I can see. It depicts an England divided (literally by a fence) into two distinct societies: the modern, overpopulated "Conurbs" where the majority of the population are kept under-educated, amused by the regular games and distracted by an ongoing war in China; and the aristocratic, rarefied "County", a rural idyll, more typical of nineteenth-century England. The latter has been almost entirely de-industrialised, electricity and cars having been abandoned in favour of horses and oil lamps; everything appears peaceful, even serene - at least, if you don't ask questions. Conurbans are suspicious of those in the County and vice versa. The control mechanisms in the Conurb are plain to see, but those of the County are somewhat more unobtrusive. Some would say it is damning of the English class system with its power and control and still has relevance today – you can decide for yourself.

The novel follows a young Conurban named Rob, as he comes to experience life in both worlds, and uncovers the Government’s aim to keep the populace just content enough that they don't question the control and manipulation mechanisms which exist. 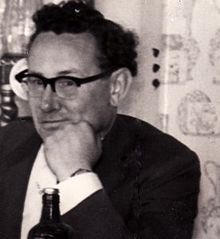 John Christopher
Following the suspicious death of his father, thirteen-year-old Rob Randall is sent to a state boarding school, but life is intolerable so Rob devises a plan to escape to the County, believing that he will avoid detection there much more easily than anywhere in the Conurb. He is further driven by the fact that his mother was also from the County and had originally crossed over into the Conurb to be with his father.

The Barrier, an actual fence, proves much less of a challenge than expected and Rob crosses over (or rather under) it, into the County. It is not long, however, before he is spotted by Mike Gifford, a boy of similar age, and after a couple of nervous nights, Rob is quickly adopted into the Gifford home where he does his best to adapt and blend in with County society…and so this novel progresses seemingly slowly until you realise that actually, it’s just a very subtle journey, as more characters are introduced and well-defined, and debate leads towards revolt and revolution. The tables turn as Rob is made aware of the means of control exerted in the County and is offered a part to play. With this epiphany, he finds himself faced with a choice and, although understated, gains an understanding of why his mother left the County in the first place. The end returns to the beginning. The more sinister plot line - that safety is not always liberation - is revealed only in the concluding pages.

An excellent adventure, this novel is a bildungsroman, as the resourceful Rob comes of age and makes his choice. The writing is as carefully controlled as the society it depicts and the plot unfolds thoughtfully, leaving the reader to wonder, perhaps, which side they would be on.

The Guardians was first published by Hamilton in 1970


Also by Artis-Ann ...
‘Coincidences Are As Rare As Unicorns’ : A Song For The Dark Times By Ian Rankin‘The Heart Of Most Murders is …’ : The Heron’s Cry By Ann CleevesThe World Of Never Again: The Nine By Gwen StraussReview: Stone Heart Deep by Paul Bassett DaviesB Is For Boat: Orphans Of The Storm By Celia Imrie