Review: The Mitchells vs. The Machines 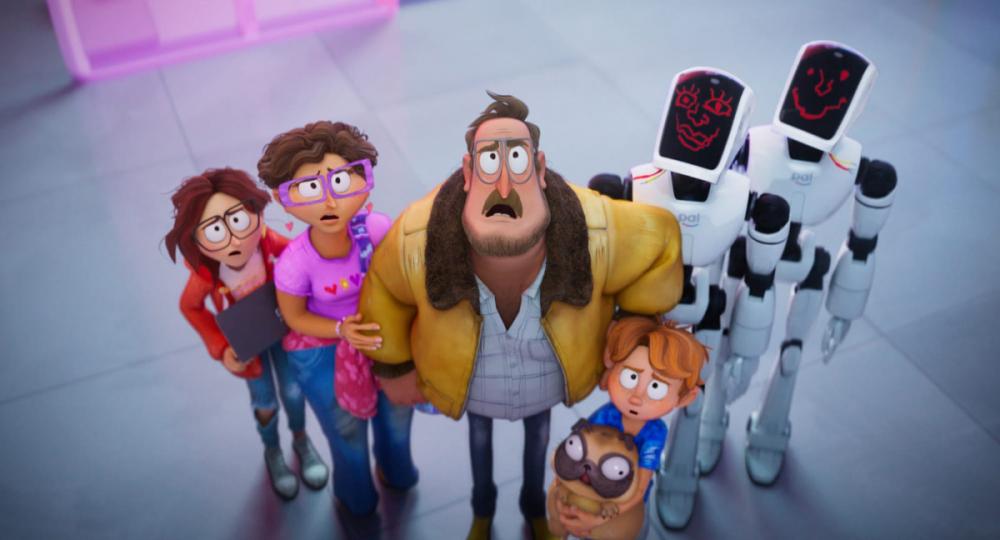 "From the Humans that brought you Spider-Man: Into the Spider-Verse” comes The Mitchells vs. The Machines, which was originally set for a cinema run but has instead found its distribution home on Netflix. On one hand that is rather sad, as this would have been great on the big screen, but wherever you are watching it, it is impossible to look away from this new animated winner from producers Phil Lord and Christopher Miller (The Lego Movie), which is a true family movie in every possible sense.

The film sees the creative Katie Mitchell (Abbi Jacobson) on her way to film school and despite having a supportive mother in Linda (Maya Rudolph), an adoring little brother in Aaron (voiced by the film’s director Mike Rianda) and the beloved eccentric family dog Monchi (voiced by internet sensation Doug the pug), she is happy to be leaving the family home after coming at constant loggerheads with her technophobic dad Rick (Danny McBride) in the last few years. But, after being forced into one last road trip by her dad (who is trying his best to re-connect with his daughter), the Mitchell’s unknowingly become the earth’s last hope, as an AI with a gripe to grind has unleashed a robot army on humanity and enslaved them.

The Mitchells vs. The Machines is a breathtakingly innovative and incredibly clever film celebrating the eccentricities of family, and showing the natural gap of generations and how it can sometimes be widened by technology if we allow it but also, how important and vital it is to come back together. Despite the robot apocalypse, the real story here is one of a family uniting again, realising what is really important and seeing each other for who and what they really are. Katie sees her dad’s sacrifices for his family and his honest love, her dad Rick sees his daughter’s feeling and passion, and it becomes the key in this truly emotional and thrilling adventure.

The animated style is electric, fresh and in many ways groundbreaking. You come in expecting something modern but fear it may be a little annoyingly and alienatingly ‘trendy’ in nature but instead this is an all inclusive work of passion, which has something for every viewer to enjoy. Mike Rianda and Jeff Rowe’s hilarious and heartwarming script works in tandem with the zestful aesthetic, which has an equally buzzing soundtrack by Mark Mothersbaugh, and it all combines for an utterly delightful and moving romp.


Also by Jack Bottomley...
Review: The Railway Children ReturnThe Railway Children Return Goes Full Steam Ahead At An Amazing Keighley Picture House World Premiere!Review: The Lost CityReview: The Nan MovieReview: The Phantom Of The Open
Rianda fills the film with exciting, fast moving, thrills and conjures up some impressive and memorable sequences at every turn. From apocalyptic furbies and scene stealing “damaged” robot companions to ‘beast mode’ mums and the almighty power of the pug, there is so much you will come away remembering and smiling at. None more than the actual human story being told here, a story celebrating difference, and reminding us that those we love have far more on their minds than we may think or appreciate.

Terrific characters and excellent vocal performances fill every frame of Mike Rianda’s passionate and diverse film. The Mitchells are a relatable and representative bunch of characters, who we feel we know, and maybe even relate to personally. They each have their quirks (Rick’s screwdriver at hand, Aaron’s dinosaur fixation) and we love them for it and, much like in The Incredibles films, it creates a family we root for and love spending time with.

That said, some of the supporting characters certainly steal some moments for themselves, the aforementioned damaged robot pair Eric (Beck Bennett) and Deborahbot 5000 (Fred Armisen), who break their programming and join the Mitchells on their journey are absolutely hysterical, Monchi is lovably crackers and Eric Andre’s tech entrepreneur Mark Bowman (unwittingly responsible for the robot uprising) feels very true to life.

Although, my personal favourite character was Olivia Colman’s rogue AI villain PAL, one of the best animated villains in quite some time. Who feels like a proper, fleshed out baddie, and who genuinely has a point in some of her cynical and vengeful opinions of humanity and how they don’t deserve what they have. She is like an old school Disney antagonist, the kind that recent Disney movies have disappointingly lacked. Like GLaDOS from the Portal video games, she is devious yet brilliant and sometimes really funny.

So with all this said, I urge you all to do yourself a favour and activate The Mitchells vs. The Machines on Netflix because this is an animated film not to be missed, and one which makes you appreciate many things that little bit more. Heartfelt, inventive and fitfully funny. It has got the lot!