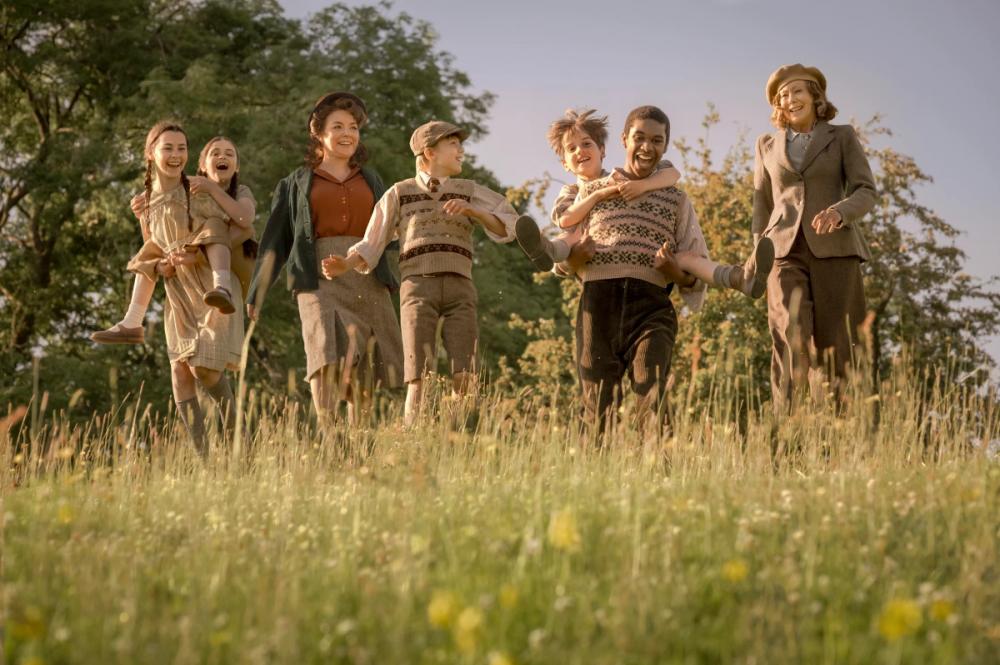 Hard to believe it has been 52 years since Lionel Jeffries adapted Edith Nesbit’s The Railway Children for the big screen and in the process created a revered British classic that has stood the test of time and has been passed down through generations as one of the greatest homegrown pictures in history.

Now, all these decades on, producer Jemma Rodgers (who heavily influenced the story with her work) had a brainchild of an idea for a sequel, and we have finally boarded the train, on those same tracks of the Keighley & Worth Valley Railway once again for a reboot-cum-legacy sequel from director Morgan Matthews that we did not quite see coming but which delivers.

The story this time has moved on to WWII in 1944, as siblings Lily (Beau Gadsdon), Pattie (Eden Hamilton) and Ted (Zac Cudby) must leave their home in Salford, Manchester to the Yorkshire village of Oakworth as child evacuees. There they are taken in by local school headmistress Annie (Sheridan Smith) and her mother Roberta (Jenny Agutter), where these children learn the true meaning of friendship and duty, as they form a bond with Annie’s proud son Thomas (Austin Haynes) and go on their own adventure, when they encounter an injured young soldier Abe (KJ Aikens).

The Railway Children Return is an unmistakably old school British adventure story refreshed with some modern sensibilities. The spirit of the original film is echoed in a few callback sequences and of course in Jennny Agutter’s return to her 1970 role, but the story itself, which starts as a WWII child evacuee tale, becomes something rather unexpected, tackling the ugliness of bigotry and beauty of friendship.

In fairness this direction, especially due to its American influence (the narrative addresses the racism rampant in America then and even now) does initially feel a little peculiar for a Yorkshire-set story, and some things are more heavily-handed in the ultimately heart of gold screenplay from Danny Brocklehurst, not to mention some logical stretches, but the core of this steam engine burns so bright and warmly that you do not care in the slightest of some of its imperfections. You just smile and take in the trip, relishing in the film’s harnessing of the best of childhood innocence and humanity.

Kit Fraser’s cinematography - like Arthur Ibbetson’s 50 years back - captures the beauty of our local Yorkshire landscapes (from Oakworth’s classic rail track scenery to Haworth’s stunning landscapes to the iconic Keighley Railway Station) and creates a spellbinding, heart-enlarging story of hope in times of fear, and triumph in times of despair. Accompanied by a wondrous score by Edward Farmer and Martin Phipps, which evokes that youthful sense of acceptance, fun and defiance.

The fresh young cast are absolutely tremendous, with Gadsdon, Aikens and Haynes being particular standouts among very talented young crowd, while Sheridan Smith is excellent and often poignant as Annie and joined by a sublime support from the ever brilliant Agutter, the cheekily fun Game of Thrones and Moonfall star John Bradley as train conductor Richard Perks (grandson of Bernard Cribbins’ original character Albert) and the reliably great veteran presence of Tom Courtenay as an uncle figure to the central family.

This is an old fashioned movie that embraces you in its steam-propelled charms, with that unmatched feeling of young hope and mischievous fun throughout. Yet, in spite of its nostalgic pleasures and war-torn story, it offers a great example for modern children to learn from, with some things many modern adults could learn from too. Division and hate is not something we are born with, it is learnt!

But going back to the roots of this story, it is so gratifying to see our local area so magically translated to the big screen once again in a film that offers audiences, young and old, a journey well worth taking. The Railway Children Return is indeed a return to the innocent, good-natured energy of the original film and acts as both a tribute and a continuation of that tale and its soul, and I enjoyed it enormously.

Also by Jack Bottomley...
The Railway Children Return Goes Full Steam Ahead At An Amazing Keighley Picture House World Premiere!Review: The Lost CityReview: The Nan MovieReview: The Phantom Of The OpenReview: Death On The Nile