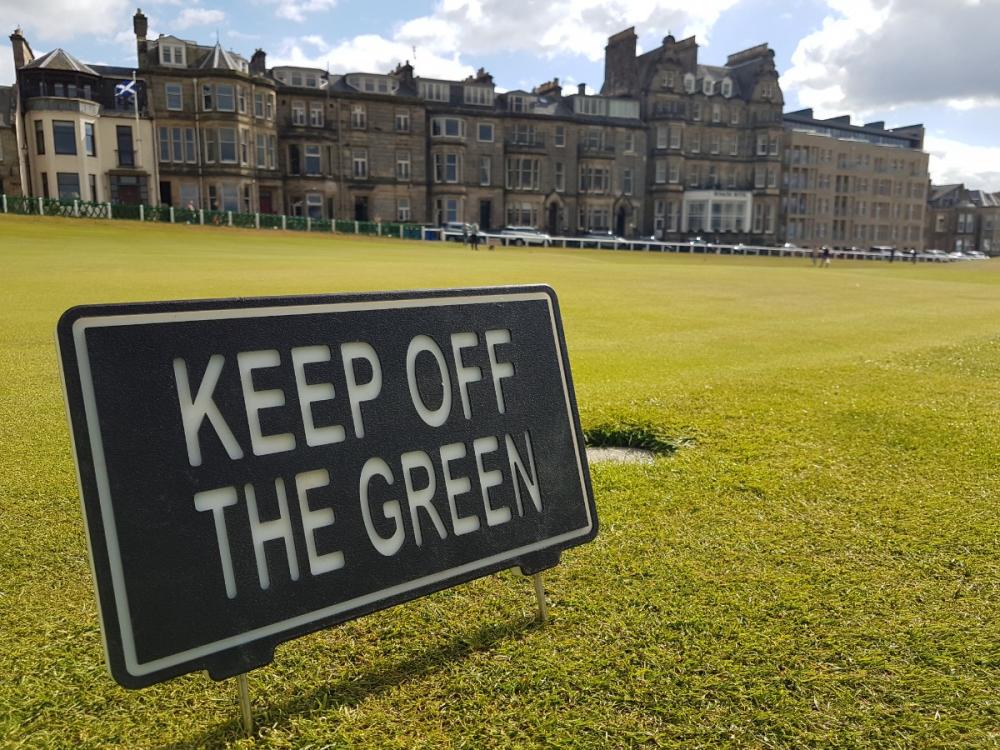 There was always the prospect of tears, the promise of secrets revealed and stories likely to fire the imagination of the most committed golfer: we were on our way north in the run up to this year’s 150th Open Championship and there was anticipation in the air!

My Ford Ka buzzed along the Northumberland coast with all the might it could muster: hardly the carriage of an aristocrat and barely large enough for a full set of clubs: fortunately I was neither a blue blood and certainly didn’t know one end of a golf iron from the other. My Filipino wife let out an unexpected shriek and I veered to the left with more than a few passing words of admonishment.

“Stop, stop. We MUST pull into the lay by,” she shouted, pointing to the fast-approaching strip of tarmac to our left. 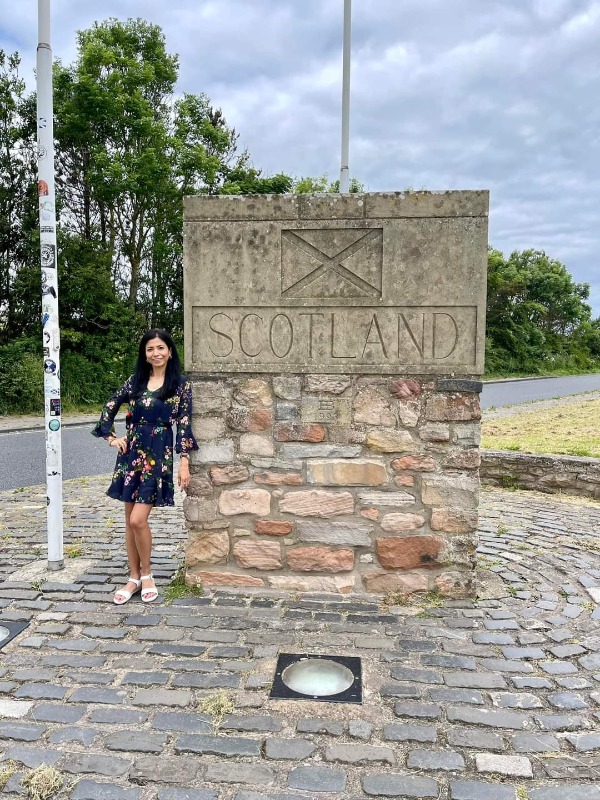 “I am so emotional,” she said.

By now tears were pouring down her face. What on earth had just happened?

“We are on the Scottish border,” she whimpered, “and in seconds I will complete my lifetime ambition to visit each of the UK’s four countries.”

It hadn’t even occurred to me but, three years earlier, she had been a resident of Asia and England was more a concept than a country, let alone Scotland!

I looked up at the three towering flagpoles, each one sporting Scotland’s blue and white colours and, after lots of photos – much to the amusement of other motorists, more concerned with getting their bacon butties and tea from a mobile chuck wagon - we were on our way.

The 270-mile drive was far from onerous because we had broken our journey with an overnight stay in Beadnell, apart from which the views were spectacular and traffic at a minimum the further north we travelled.

By early afternoon our bags were being checked in at the Rusacks St Andrews Hotel. 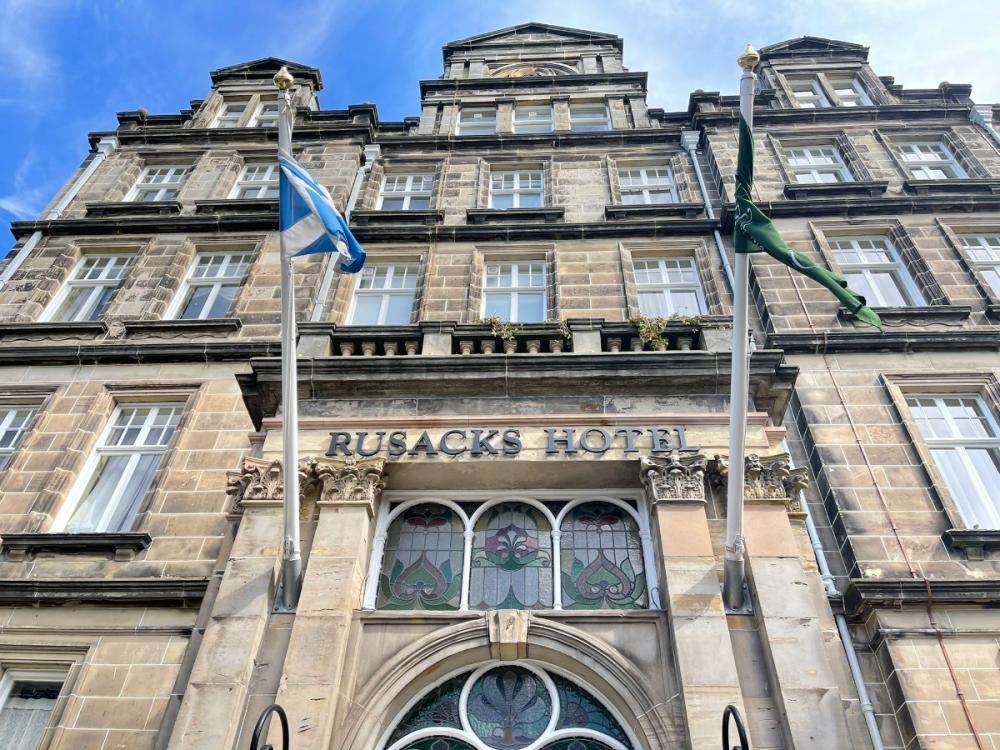 Somehow we had found the last remaining ‘no restrictions’ parking spot about 20 yards from the front door: result!Occupying a landmark 1600’s building, overlooking the home of golf and feet from Old Tom Morris’ hallowed Old Course Links – the property is the newest offering from Marine and Lawn Hotels and Resorts.

It doesn’t take long to realise that ‘golf’ permeates the very soul of St Andrews and indeed, this hotel, which has come to regard itself as something of an explorers’ club and a living, evolving museum.

The amiable concierge sidled up for a chat as our details were being entered into the reception computer.He was a man of many facets who brought a lifetime of experience to the role…and the odd story or two! Maybe even the occasional secret?

I asked how difficult it was to get a round of golf on the hallowed course? Almost nigh on impossible came the answer, unless you had booked well in advance, had good contacts, were well heeled or had inside help. “Inside help?” I quizzed. 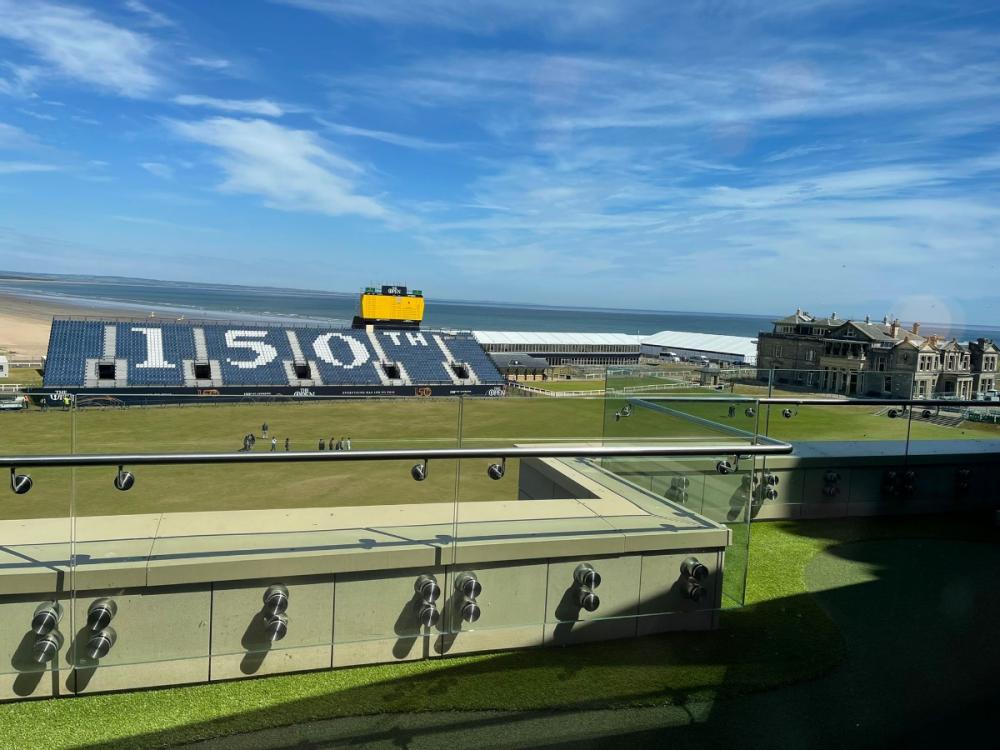 Apparently there was a daily queue at the ‘Starters Box’ which golf enthusiasts could join in the hope of getting a round as part of a balloting process.

“Our night staff often watch the area with binoculars where the queue forms – just across,” he said, “and as soon as the first person turns up – sometimes in the small hours – we have been known to wake a guest and advise them to join the queue,” he advised.

Clearly golf in this part of the world – where the Royal and Ancient is king - was a serious business and, occasionally, sleep deprivation was the price of golfing success!Room 503 in the newly extended part of the hotel – there are now 123 rooms since the 2021 refurb and extension - had a balcony and a glorious view over the Old Course and its 18th hole. Its exterior walls were also home to a priceless Rolex clock. 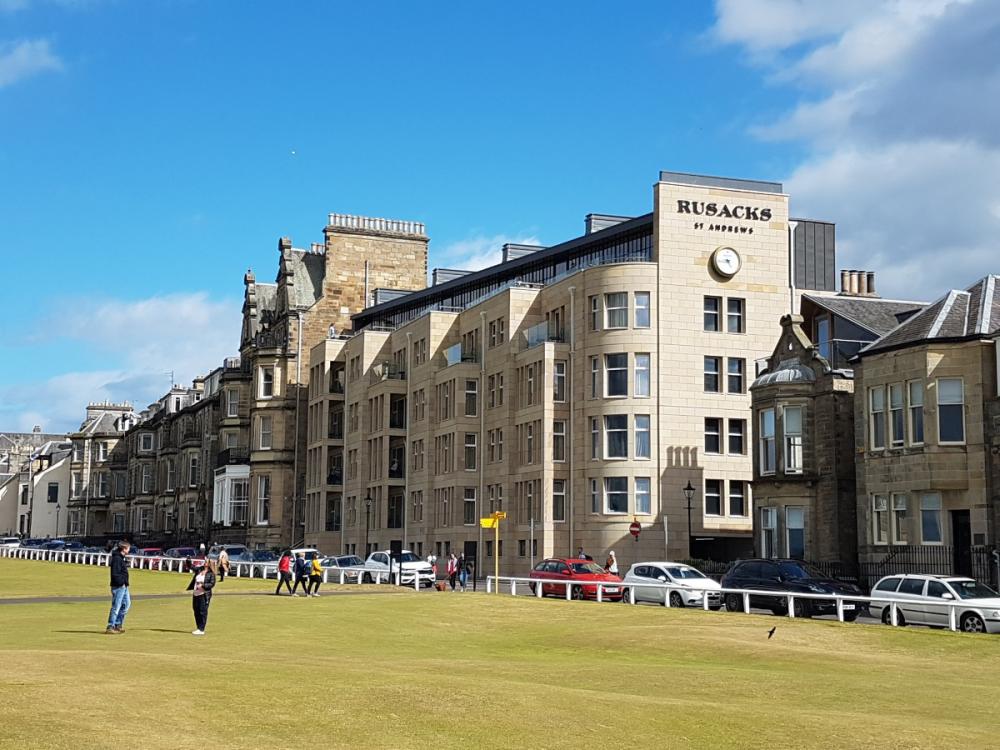 “You will struggle to book this room during Open week,” said the polite, perfectly toned gent assisting us with our bags, “it is taken years in advance.” He was studying medicine at St Andrew’s University. “I had thought of surgery,” he said, “but now, maybe a career in the City?” He would still need a sharp knife!

The room was traditional with its dark blue and racing green colours, embroidered bed cushions featuring two golf clubs, warm wood and antique furnishings – including a large double bed with velvet green throw - a vivid ode to the Highlands and Linksland of Scotland. 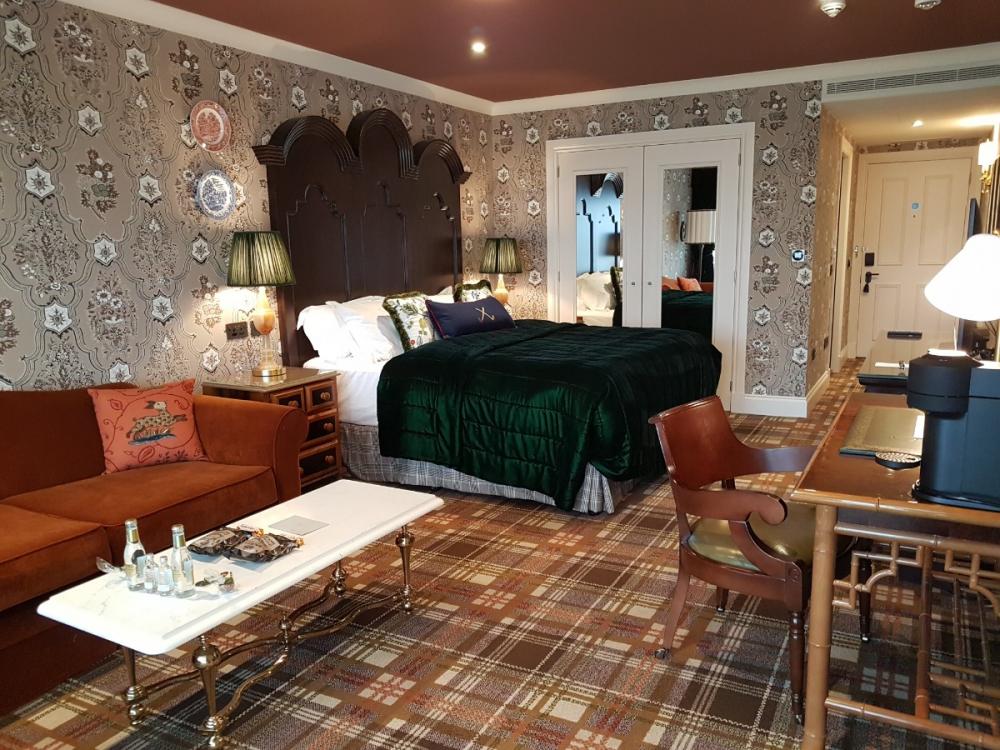 Tunnock caramel wafers sat on the coffee table next to two packets of Mackie’s of Scotland haggis and cracked black pepper crisps, all to be washed down with a chocolate golf ball and two mini bottles of Eden Mill St Andrews Golf Gin!

“Ooh they’ve got Floris of London toiletries,” said my wife “and even the towel dressing gowns are embroidered with the hotel crest,” she added. ‘Dum spiro spero’ read the words, the same as the ones above the reception fireplace: while I breathe, I hope.

In room dining is available daily from 12pm – 10pm with a limited menu from 10pm – 6am but why would you behave like a schoolboy on his Xbox and secrete yourself in a bedroom when there is an eating emporium to die for? 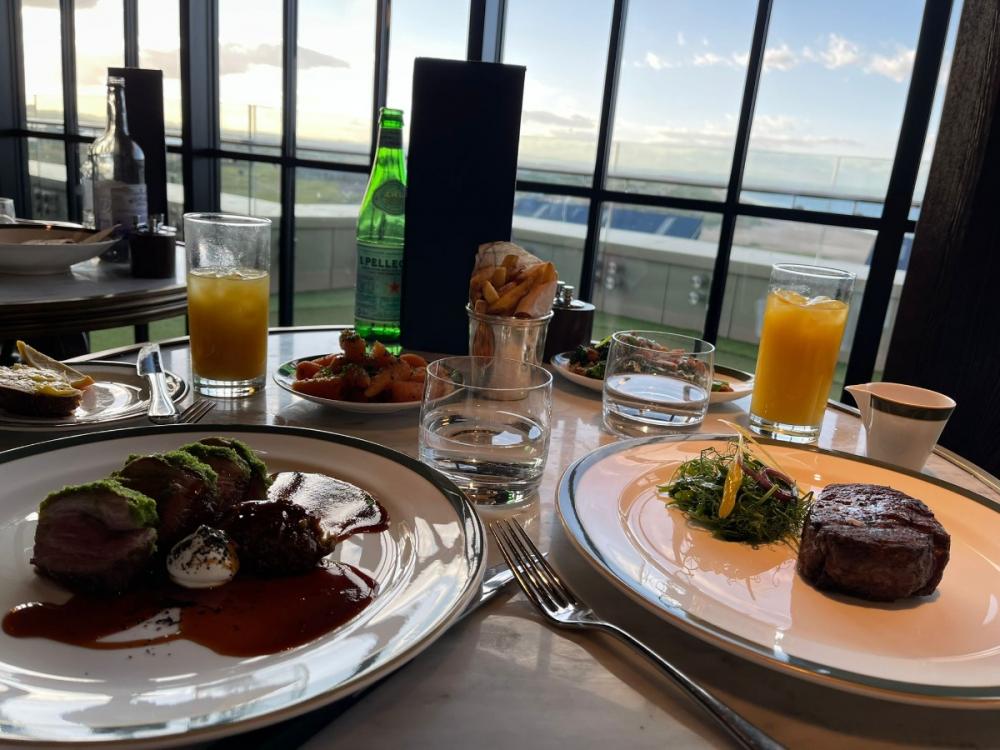 ...whilst the ground floor Bridge Restaurant is a friendly, authentic all-day eatery.

The dining room is sophisticated yet welcoming, casual yet polished, and also with views over the historic golf course. A laid-back and family-friendly place in which to have breakfast or an excellent meal.

There you can also peruse the work of ‘golf’ painter Joe Austen whose works adorn the walls of this pristine setting, another timely reminder of where you are staying. 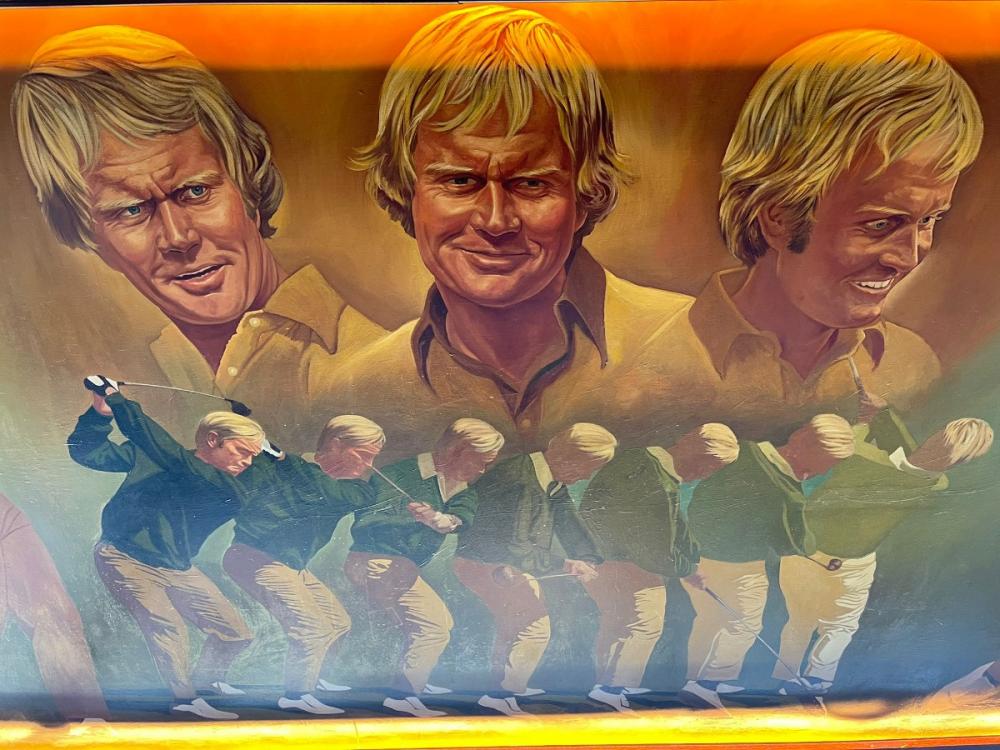 Beneath the Bridge Restaurant, a few steps down, there is another of St Andrews' best kept secrets: the One Under pub. Thirteen letters adorn the woodwork above the bar: IITY WIM WYB MAD.

“What does that mean?” I quizzed. 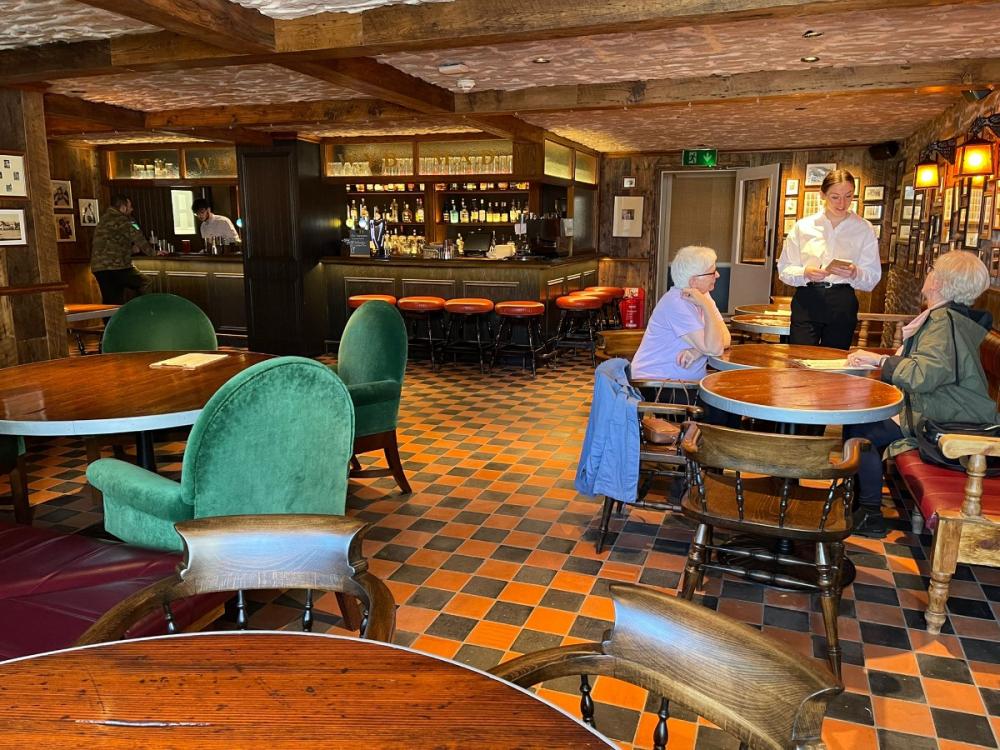 “If I Tell You What It Means Will You Buy Me A Drink?” came the answer. “Yes,” I said. I had just been snared!

A Yorkshireman making a slow move towards his wallet was always a sight to behold!

However, I was at that moment, in the company of a Scot, allegedly a Tyke with his generosity removed! Nevertheless, I was charitably relieved of my drink obligation!The hotel sits at the heart of St Andrews and outside the front door, just yards away, a blue plaque pays homage to ‘Old’ Tom Morris who was the father of modern greenkeeping and golf design, winning the Open four times in the 1860’s, a feat repeated by his son Tommy soon after.

Nearby you can check out the ruins of the Cathedral, enjoy coffee in the Northpoint Café on North Street, the place where Wills used to meet Kate when they were both undergraduates... 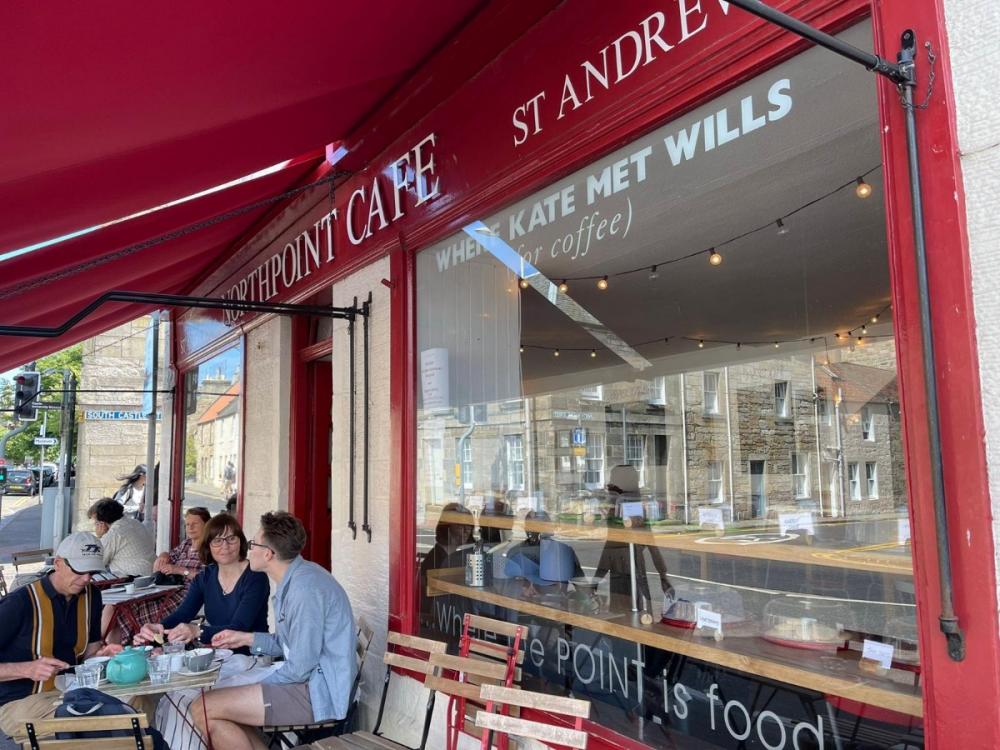 ...take in a myriad of golf shops, peruse the harbour and Heritage Museum or simply retire back to the hotel for a game of billiards 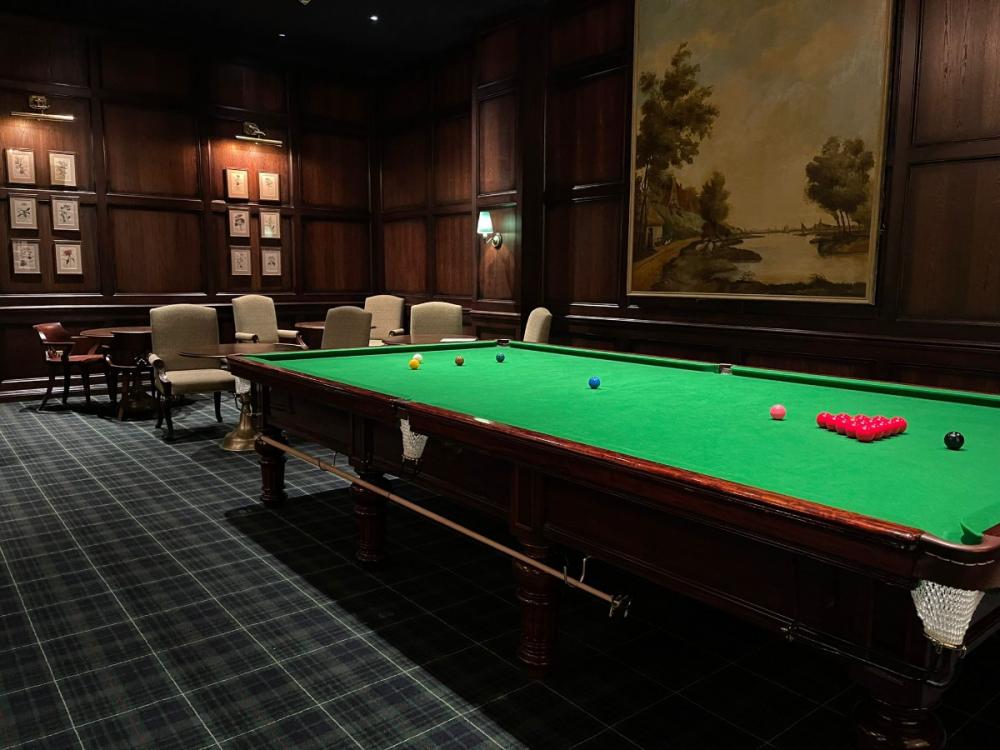 ...some relaxation in the sumptuous reception area 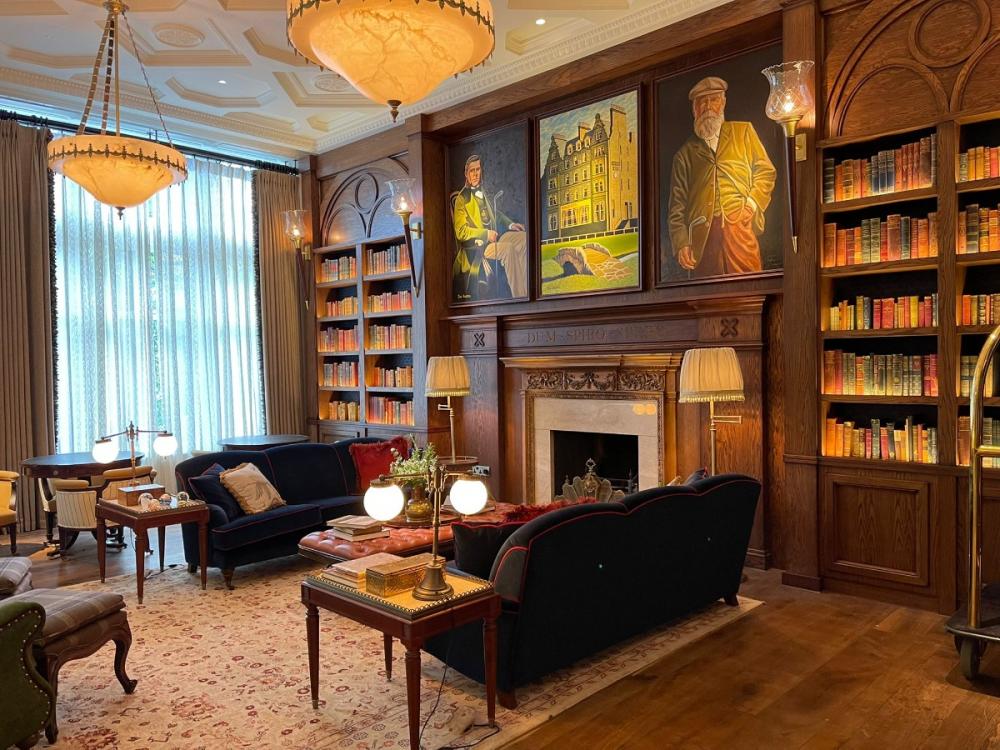 ...or simply watch some tv in the bedroom!

The Rusacks St Andrews Hotel has a real sense of place. 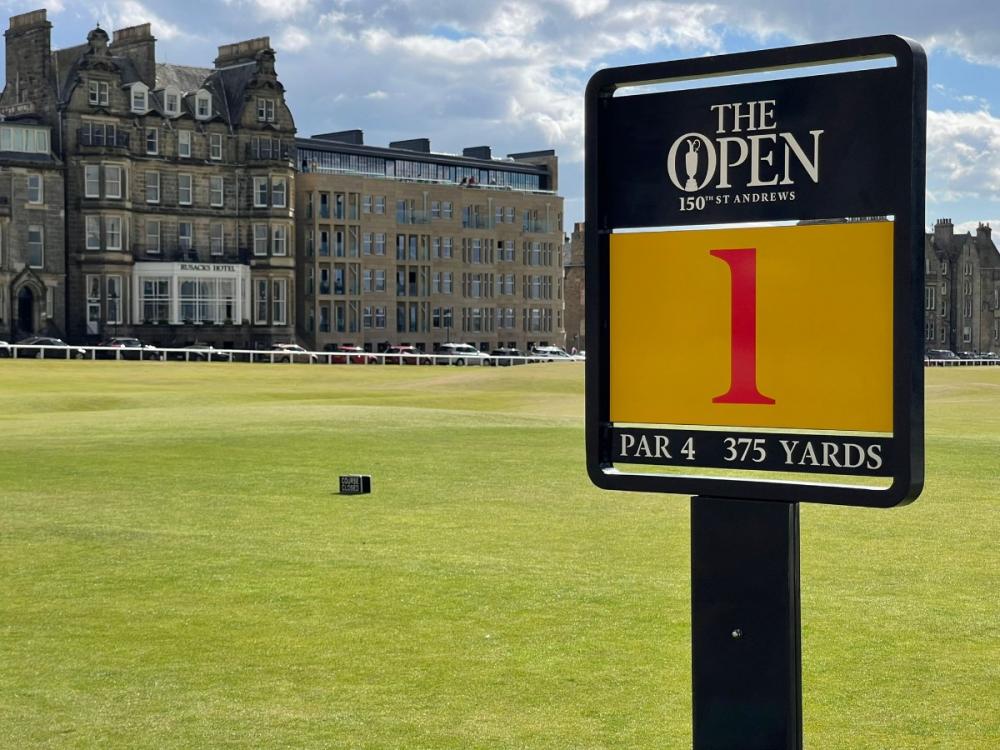 “It’s owned by AJ Capital in America,” whispered one of the restaurant waitresses in my ear. “The owner’s very young and he can often be seen in the hotel in a baseball cap and jeans but I’m told he hasn’t a clue how to play golf,” she grinned.

I had just purloined another secret! As my wife munched on some seasonal vegetables I mused at how the American owner could have developed such an eye for opportunity for one so young! 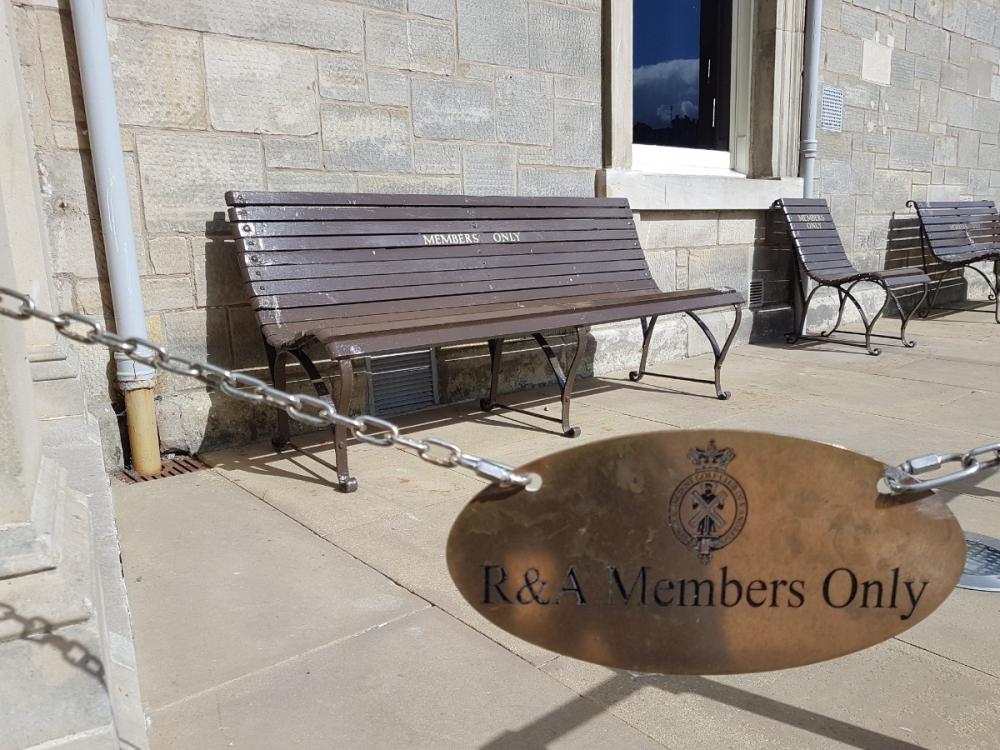 Yes, I thought, he made a wise investment with this one.

It was nearly time for bed. "A glass of claret dear before we retire?"

Special Offer: The 150 Package:
Available to book after The Open. Includes:
Overnight stay in a room with views of The Old Course and West Sands Beach
Entry to the R&A World Golf Museum for two, located opposite the clubhouse of the Royal and Ancient Golf Club
£150 food and beverage credit (for 150 years of The Open), to be spent at either the 18 Rooftop Restaurant, the One Under Bar or The Bridge restaurant.
In-room golf gifts including Marine & Lawn branded golf tees, a ball marker, Titleist prov1 golf balls
Breakfast at The Bridge
From £405 per room per night*
use promo code RUSACKS150 to book