Russell Holds Off Leclerc To Reign In Spain 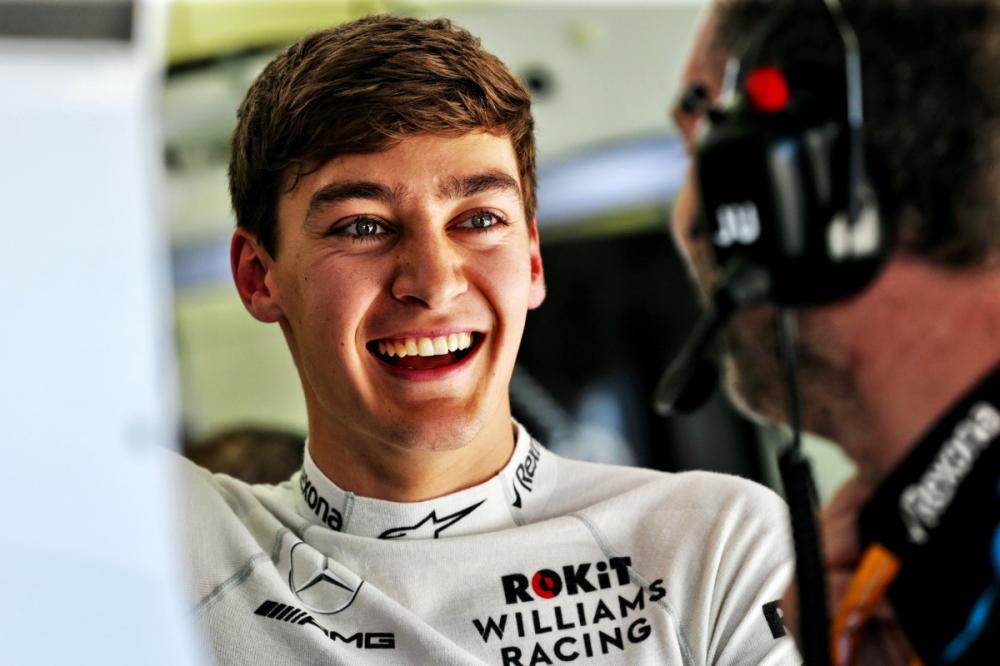 George Russell was delighted to give his beleaguered Williams team a victory
With the global coronavirus pandemic still delaying the start of the 2020 Formula 1 season, this weekend’s Spanish Grand Prix at the Circuit de Barcelona-Catalunya had to become virtual and it was 22 year old British driver George Russell who emerged on top after another gripping encounter.

With the likes of Lewis Hamilton, Max Verstappen and Sebastian Vettel still unwilling to reveal their simulator racing skills it was left to the usual F1 sextet to represent the current grid - namely Charles Leclerc, Alex Albon, Antonio Giovinazzi and Lando Norris plus the Williams pairing of Russell and Nicholas Latifi. At least Hamilton’s 28 year old half-brother Nic appeared for the first time as Norris’s McLaren team-mate. 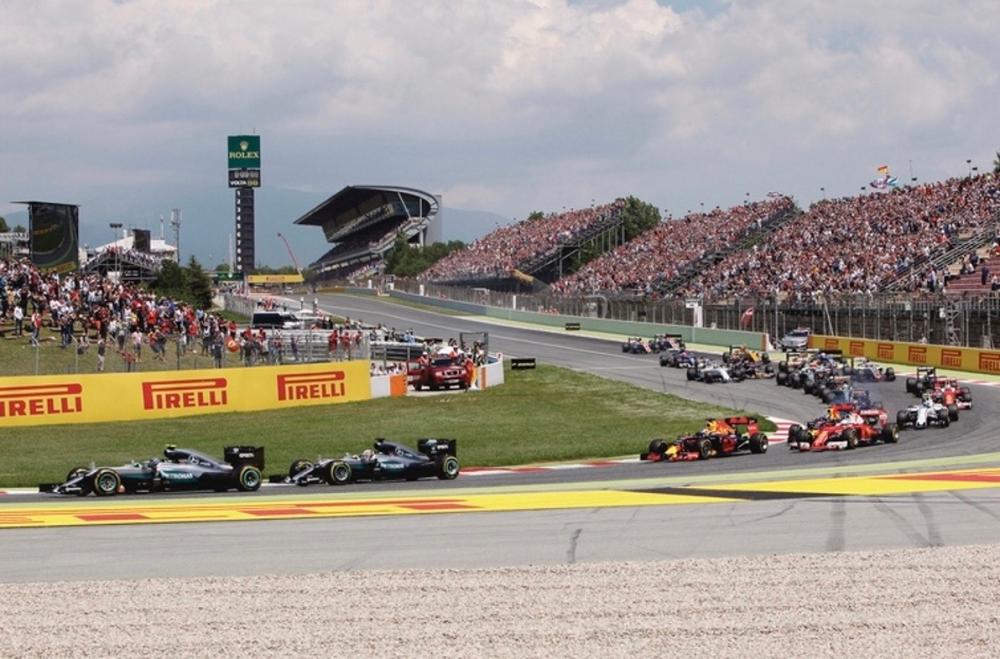 Sadly no packed grandstands at Spain’s Circuit de Barcelona-Catalunya on this occasion
Albon of course was fresh from his victory in last weekend’s virtual Dutch Grand Prix after a thrilling race long battle with Leclerc, who’d won the previous round in China. The British/Thai driver admitted “I was shaking afterwards as the pressure was unbelievable - I feel more scared driving a simulator than the real thing!” His Red Bull team-mate for this weekend came from football’s English Premiership, with Manchester City’s Argentinian star striker Sergio Agüero keen to test his skills in an alternative sporting discipline.

Football was also represented by Real Madrid goalkeeper Thibaut Courtois, returning for a second race, and the debutant Barcelona midfielder Arthur Melo. Elsewhere on the grid Italian driver Vitantonio Liuzzi, who was always known simply as Toni whilst competing in Formula 1 from 2005 to 2012, lined up for AlphaTauri, the team which was formerly known as Toro Rosso upto the end of last season. 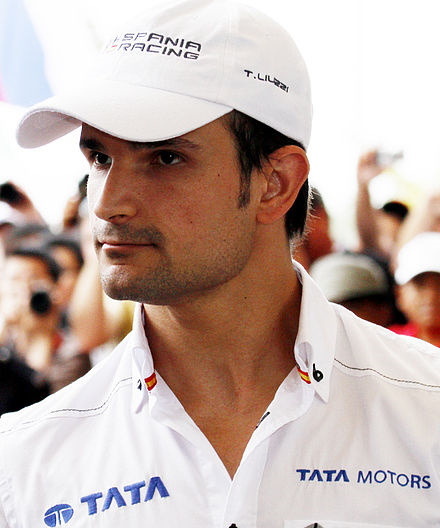 Former Formula 1 driver Vitantonio Liuzzi made a comeback, if only via a simulator
The Renault line-up was an all British pairing, comprising of the young Renault Sport Academy driver Max Fewtrell, who’s preparing for a second season in the FIA F3 championship, and the slightly less youthful golfer Ian Poulter, who was making his third virtual F1 appearance.

After the 18 minute qualifying session Russell claimed pole position ahead of the Mexican former F1 driver Esteban Gutierrez and Leclerc, with Albon only fifth. However, when the red lights went out it all went so wrong for Russell as he dropped to fifth position himself, with Gutierrez the early leader from Leclerc.

The Ferrari superstar wasn’t in a mood to hang around though and just one lap later usurped Gutierrez round the outside at Turn 1 as Albon lurked behind the front pair in third place. The latter then slipstreamed his way up to second before surprising everyone with a two stop strategy which sent him down the pitlane to switch to medium compound tyres.

Three tours later Leclerc made what was to be his only pitstop of the race as he chose an alternative strategy and changed to hard tyres. As we approached half distance in the 33 lap Grand Prix Albon led from Leclerc and Russell, but the frontman was committed to making his second stop and rejoined the circuit now on hard tyres but down in seventh position. 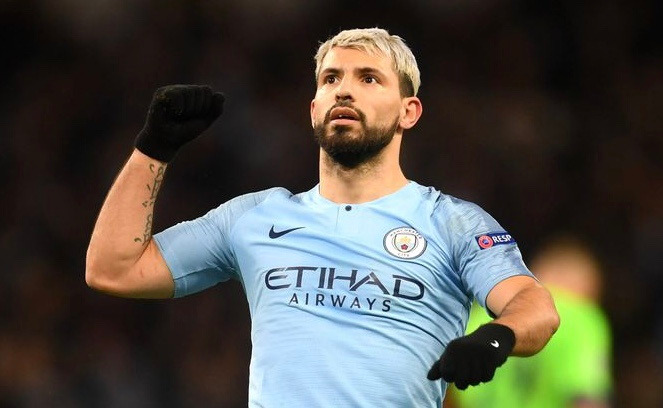 Manchester City’s Argentinian football star Sergio Argüero lined up for his virtual F1 debut too
As Russell hunted down the leading Leclerc his enthusiasm got the better of him and he picked up a three second penalty for track limits abuse. The Williams driver still fought on though and on lap 25 swept past his Monégasque rival. It wasn’t to last though as just two tours later Leclerc headed out front again with a superb move at Turn 1.

This brilliant dogfight wasn’t over though as Russell retook the lead on the following lap and set about trying to build a three second lead over the Ferrari driver before the chequered flag. However, more high drama was to follow as Albon picked up a track limits penalty and then crucially Leclerc, who was set to finish a close second on track but win after application of Russell’s penalty, received a penalty himself.


Also by Graham Read...
The Pandemic Forces Further F1 Calendar ChangesA 100th Pole And A Sixth Spanish Victory For HamiltonHamilton Extends His Championship Lead In Portugal﻿F1 Approves Sprint Races At Three 2021 Grands PrixDoncaster’s Ewen Sergison Claims A Podium Finish In Monaco
As a result a delighted Russell, who is one of the most likeable F1 drivers I have ever come across, claimed the victory spoils, with Leclerc and Gutierrez joining him on the podium and Albon completing the top quartet. Further down the field Argüero, who is a passionate F1 fan, made a solid if unspectacular debut, finishing in 14th position, one place ahead of Nic Hamilton.

With the earliest that real F1 might spring into action, albeit behind closed doors, being in Austria during the first weekend in July, the Monaco Grand Prix, which is widely regarded as the jewel in Formula 1’s crown and which should have taken place in two weeks’ time, will also have to be virtual this year before returning in 2021.

Monaco and Austria’s Red Bull Ring are such differing venues, but both are brilliant in their own distinctive ways and I can so recommend a visit to either when better times return and we are enjoying something closer to more normal life in due course.