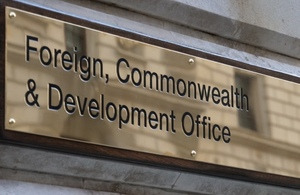 The Foreign, Commonwealth and Development Office has summoned the Russian Ambassador over the United Kingdom’s deep concern at a pattern of malign activity, including cyber intrusions, interference in democratic processes, and the build-up of military forces near the Ukrainian border and in illegally-annexed Crimea.

"The UK Government is deeply concerned about a pattern of malign behaviour by the Russian State. At today’s Summons, FCDO Permanent Under Secretary Sir Philip Barton made clear the UK’s support for the actions announced by President Biden in response to Russia’s recent activity.

"He set out the UK assessment that the Russian Intelligence Services were behind the SolarWinds compromise.

"He informed the Ambassador that the UK will continue to work with our allies to call out and counter malign operations by the Russian Intelligence Services.

"Sir Philip also stated the UK’s concern at the build up of Russian military forces near the Ukrainian border and illegally-annexed Crimea. These activities are threatening and destabilising. Russia needs to cease its provocations and de-escalate tensions in line with its international obligations."